It’s been six years since a Canadian team has won a gold medal at the Ford World Women’s Curling Championship, presented by Booster Juice. 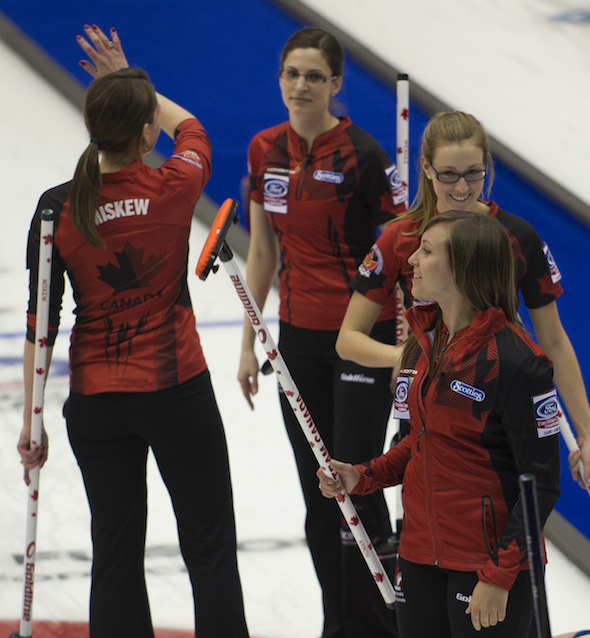 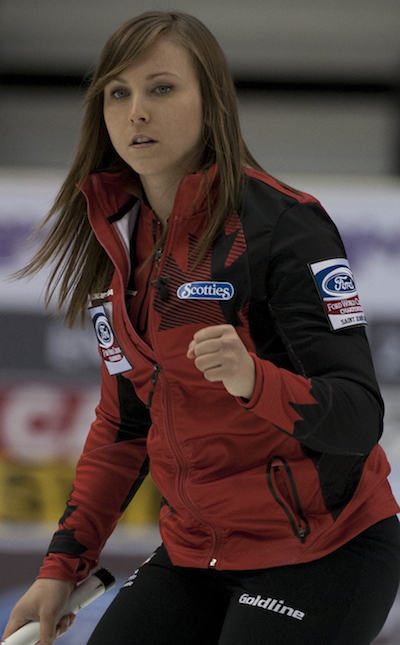 With the win, Canada will meet Switzerland’s Binia Feltscher (9-2) in the Page playoff 1-2 game on Friday at 7:30 p.m. (all times Atlantic). The winner will advance to Sunday’s 7:30 p.m. gold-medal game, while the loser will drop to Saturday’s 2 p.m. semifinal. “Now our job is done for the round-robin,” said Homan, the bronze-medallist at last year’s women’s worlds in Latvia. “The one-two is a little more comfortable than going through tiebreakers like last year, so we get a little more rest. My voice needs it, that’s for sure. There’s not as much pressure in the 1-2; either way, you still have a chance at the gold-medal game. And that’s what we’re gunning or now.” The rest of the playoff picture shapes up like this. South Korea’s Ji-sun Kim (8-3) will play Sweden in a fourth-place tiebreaker on Friday at 2:30 p.m., with the winner moving on to the Page 3-4 game against Russia’s Anna Sidorova (8-3) on Saturday at 9 a.m. The Page 3-4 winner moves to the semifinal while the loser drops to the bronze-medal game on Sunday at noon against the semifinal loser. Canada, meanwhile, gets two cracks at the final by virtue of its impressive win over the Swedes. Canada dictated the play from the first end on, taking two in the second end, adding a deuce in the sixth and then a masterfully executed three-ender in the eighth, finished off by Homan’s raise to the four-foot. “That felt really good,” said Homan. “My team played so well on so many big shots. Sweden made some amazing shots, too. Our team kind of took everything from all week and put it all together to make some big, tough shots. We’ll take a lot of those shots for our confidence into the 1-2.” Russia had a chance to reach the 1-2 game, but let the opportunity slip away when Sidorova was threw her last-shot draw through the house, needing to bite the eight-foot for the victory. That left Anna Kubešková of the Czech Republic with an 8-7 win and dropped the Russians back a step in the playoffs. South Korea forced the tiebreaker with Sweden with a 10-5 triumph over Scotland’s Kerry Barr (2-9). Kim put three-enders on the scoreboard in the second and sixth ends to get into the playoff mix. The Koreans, Russians and Swedes all finished with 8-3 records, and were 1-1 against each other, but the Russians had the best results in the pre-game last-shot draw standings to claim third place in the standings. “We just have to play a good game in the tiebreaker,” said Sigfridsson. “That’s about it. Just reload and come out with a good game tomorrow. There were a few good things to take away with us from this game, but we just didn’t make enough shots.” In the other Draw 17 game, Denmark’s Madeleine Dupont turned back Latvia’s Evita Regża 10-4. Denmark finished with a 2-9 record while the Latvians trailed the pack at 1-10. All playoff rounds for the 2014 Ford World Women’s Curling Championship will be televised on TSN/RDS/RDS2, the official broadcasting partner of the Season of Champions. Live scoring is available at: www.curling.ca/scoreboard/?e=58 To purchase tickets to the Ford World Women’s Curling Championship, presented by Booster Juice, go to: www.curling.ca/2014worldwomen-en/tickets/ The French version of this story will be available at www.curling.ca/2014worldwomen-fr/ as soon as possible. Follow @ccacurling on Twitter (#FWWCC) for updates during the 2014 Ford Worlds.