Take a look at the 12 teams playing today in the 2014 Ford World Women’s Curling Championship, presented by Booster Juice.

Even when it comes to the teams that qualify for this weekend’s Page playoffs, even when it comes to the three teams that will step on the medal podium late Sunday evening at Harbour Station in Saint John, N.B., there is no guarantee that you’ll see any of them at the 2015 World Women’s Championship, presented by Ford of Canada, in Sapporo, Japan. Only the host Japanese team — which isn’t competing this week in Saint John — is guaranteed a berth. The 11 other teams? Well, they have to perform under pressure to book their tickets to Japan 12 months hence.

Russian skip Anna Sidorova apparently didn’t like this shot, but she made enough of them to beat Switzerland on Thursday morning. (Photo, CCA/Michael Burns)

“I think that’s the right thing,” said Russian skip Anna Sidorova on Thursday, after a clutch 8-5 win over Switzerland’s Binia Feltscher to clinch at least a tiebreaker berth in Saint John. “Lots of teams want to play in the Europeans and lots of teams want to play in the Worlds. Everybody can play, but you have to fight for your right to play there. That’s my opinion. There are only 12 teams here (at the Ford Worlds), and if you want to be in the top 12, you have to show you are ready to fight there.” The 12-team fields for the men’s and women’s worlds are set up thusly: two teams from the Americas zone (including host, where applicable), two teams from the Pacific-Asia zone (including host, where applicable) and eight teams from Europe (again, including host, where applicable). The Pacific-Asia teams are determined through the Pacific-Asia regional championship in late fall each year, with the top two finishers earning world berths. If you don’t perform, you don’t advance. The European qualifiers are decided at the European championships in December. The top seven finishers in the A pool earn berths for their countries, while the eighth-place finisher (or seventh when a world championship is staged in Europe) must face off with the winner of the B pool in a best of three series for the final European berth into the worlds. Again, if you don’t perform, you don’t advance. As for the Americas zone, the top finisher from the previous year’s world championship between Canada and the U.S. clinches a spot in the following year’s world championship. The lower-placed finisher can be challenged by another country in the Americas zone, and that’s not an insignificant consideration. Brazilian teams have challenged the U.S. in the past on the men’s side, and the country’s interest in curling is skyrocketing thanks to Olympic exposure. Once again, performance under pressure is the only way to get to the worlds — nothing is guaranteed to any country. That was the case going into the final day of round-robin play in Saint John on Thursday, as none of the four Page playoff positions had been decided. And it was still the case after the morning draw, with five teams still alive for the four spots, including Canada’s Rachel Homan, whose Ottawa team is at 8-1 and had a bye. The Canadians will be back on the ice Thursday at 2:30 p.m. (all times Atlantic) against China’s Sijia Liu (6-4) and then again at 7:30 p.m. in a showdown with Sweden’s Margaretha Sigfridsson (8-2). The Swedes shook off Wednesday night’s loss to Switzerland with an emphatic 10-4 win over China to nail down at least a tiebreaker berth. “It was very important to get a few steps forward instead of backwards like yesterday, so that’s what we were aiming for and yes, it was a good game,” said Sigfridsson. “Not perfect, but we were happy with the game. We have everything in our own hands and one game left to play in the round robin, so we’re happy.” Going into the afternoon slate, Canada is at 8-1, the Swedes, Swiss and Russians are at 8-2 and South Korea’s Ji-sun Kim is at 7-3 and needing a win over Scotland’s Kerry Barr (2-7) on Thursday evening and a loss from one of the two-loss teams this afternoon or this evening, or two losses from Canada, to force a tiebreaker on Friday at 2:30 p.m. 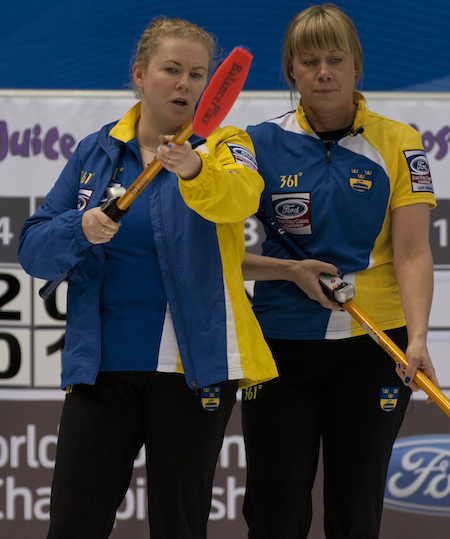 South Korea stayed alive with an 8-6 win over Allison Pottinger of the United States, knocking the U.S. (5-5) out of the playoff race, while in the other game, Germany’s Imogen Lehmann (2-8) was a 6-4 winner over Latvia’s Evita Regža (1-9). The top four teams advance to the Page playoffs, which see the first-and-second place teams playing for a berth in Sunday’s gold-medal game (7:30 p.m., all times Atlantic). The loser of the one-two game drops to the semifinal (Saturday, 2 p.m.) against the winner of the Page three-four game. The semifinal loser and Page three-four loser will play for the bronze medal Sunday at noon. All Canadian games and the playoff rounds for the 2014 Ford World Women’s Curling Championship will be televised on TSN/RDS/RDS2, the official broadcasting partner of the Season of Champions. Live scoring is available at: www.curling.ca/scoreboard/?e=58 To purchase tickets to the Ford World Women’s Curling Championship, presented by Booster Juice, go to: www.curling.ca/2014worldwomen-en/tickets/ The French version of this story will be available at www.curling.ca/2014worldwomen-fr/ as soon as possible. Follow @ccacurling on Twitter (#FWWCC) for updates during the 2014 Ford Worlds.