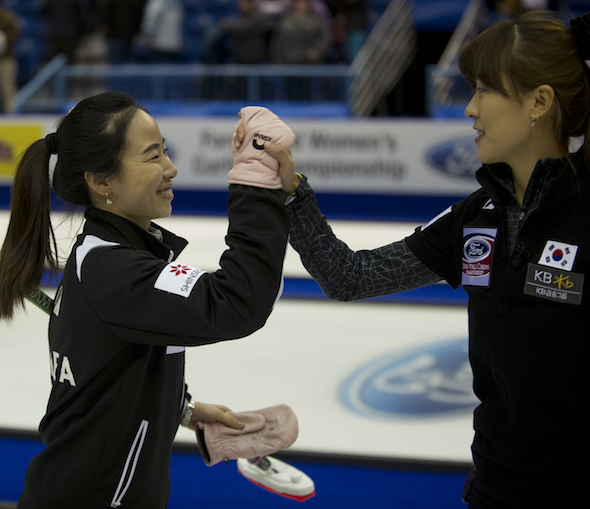 Kim, along with vice-skip (and last-rock thrower) Un-chi Gim, second Seul-Bee Lee and lead Min-ji Um, defeated Russia’s Anna Sidorova 9-5 on Saturday at Harbour Station in Saint John, N.B., to advance to a semifinal showdown against Switzerland’s Binia Feltscher, Saturday at 2 p.m. (all times Atlantic). Russia, meanwhile, will meet the semifinal loser for the bronze medal Sunday at noon. “Today we just tried to enjoy the game, we tried to enjoy it even more than before,” said Kim with a smile. “The Russian team is a very good team, but the Korean team members concentrated during the game, so that’s why we got the win in this game.” South Korea, which reached the semifinal two years ago at the Ford Worlds in Lethbridge, Alta., was able to recover from surrendering a first-end deuce, dominating play for the final nine ends against a Russian team that still seemed shaken after losing its final round-robin contest Thursday night when Sidorova’s last-rock draw for the win, needing only to bite the eight-foot, sailed through the rings. A win would have clinched a berth in the Page 1-2 game. 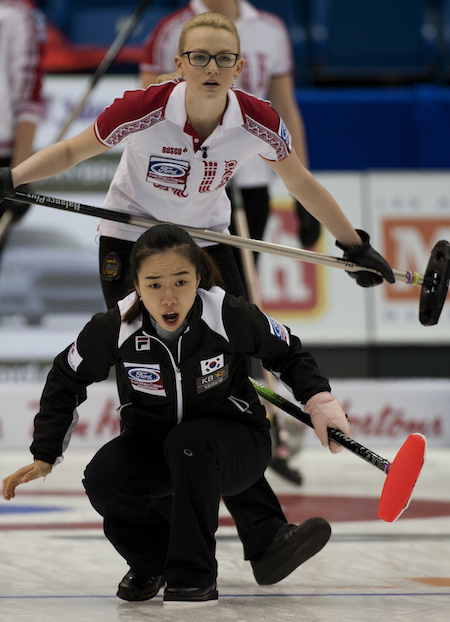 While the Russians had the hot start, it was their later mistakes that proved costly as missed draws from Sidorova resulted in a stolen deuce for South Korea in the fifth end, and a stolen single in the eighth. “The ice today was really fast,” said Sidorova. “We would play a guard shot and it would be in the house. That was the main mistake for us today.” Interestingly, Kim’s South Korean team (same players, but in different positions) played Switzerland in the semifinal two years ago; Mirjam Ott’s Swiss team would win that semi 9-6 despite trailing 6-5 through eighth ends, and would go on to dispatch Sweden’s Margaretha Sigfridsson in the gold-medal game. “The important way to win against Switzerland is just to enjoy the game,” said Kim. “If we enjoy that game, we can be the winner of that game.” The Russians, meanwhile, have 24 hours to pick up the pieces for the bronze-medal game in pursuit of a long-awaited first trip to the podium at the World Women’s. “We’ve got huge motivation, I would sayl because to get to the top four is for nothing if you don’t have any medals,” said Sidorova. “It is much more important to get the medal and not be fourth.” All playoff rounds for the 2014 Ford World Women’s Curling Championship will be televised on TSN/RDS/RDS2, the official broadcasting partner of the Season of Champions. Live scoring is available at: www.curling.ca/scoreboard/?e=58 To purchase tickets to the Ford World Women’s Curling Championship, presented by Booster Juice, go to: www.curling.ca/2014worldwomen-en/tickets/ The French version of this story will be available at www.curling.ca/2014worldwomen-fr/ as soon as possible. Follow @ccacurling on Twitter (#FWWCC) for updates during the 2014 Ford Worlds.