Switzerland to play Canada for gold medal at 2014 Ford Worlds 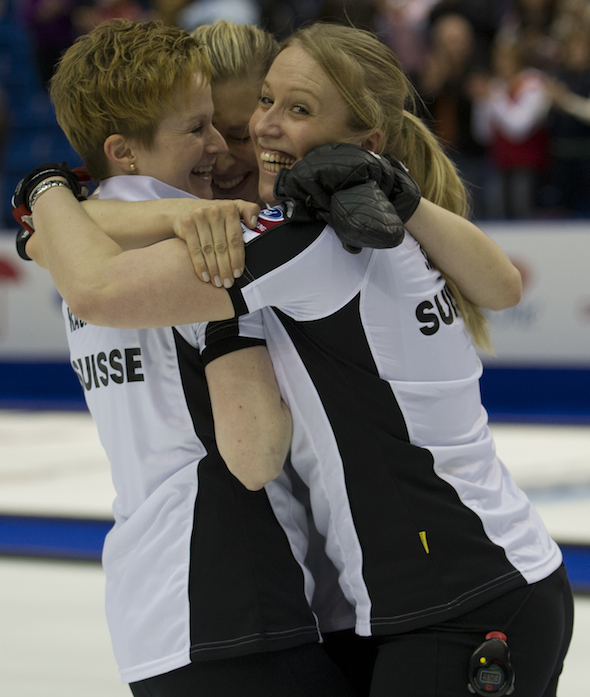 Switzerland’s Binia Feltscher and her team from Flims — third Irena Schori, second Franziska Kaufmann and lead Christine Urech — reached the gold-medal game of the 2014 Ford Worlds with a 7-3 win over South Korea’s Ji-sun Kim on Saturday afternoon at Harbour Station in Saint John, N.B. With the win, the Swiss advance to Sunday’s 7:30 p.m. (all times Atlantic) gold-medal game against Canada’s Rachel Homan. Two years ago in Lethbridge, Alta., Switzerland’s Mirjam Ott prevailed, beating Sweden’s Margaretha Sigfridsson in the final. “We are all very surprised and very happy,” said Schori. “We are so excited to be here. Nobody in Switzerland was thinking about that before the championship. Now we are here and played good. We will be happy to play the final.” 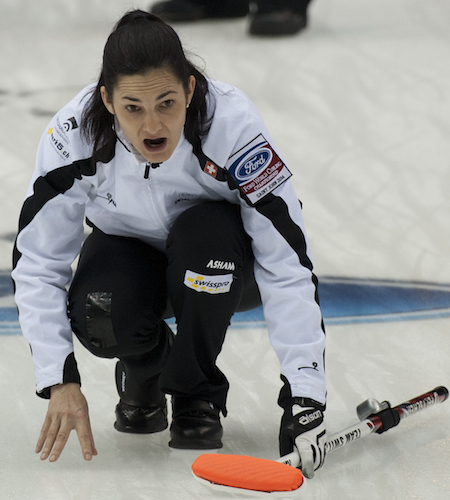 In a well-played game, the Swiss had just one more big shot in their arsenal than Kim’s Cinderella South Korean squad, and it came in the ninth end. After South Korean last-rock thrower Un-chi Gim made an in-off to sit corner-frozen biting the button, Feltscher made a raise takeout to remove the Korean stone and score a crushing three. “Korea was attacking and the main thing was to not give up one at that point and the three was obviously a bonus from that,” she said. “We had the advantage of the last rock (in the first end) and we felt very comfortable with that. We just played our game the way we had planned it.” Ironically, two years ago Switzerland beat South Korea in the semifinal thanks largely to a count of three in the ninth end. There’s no question Homan’s team will be the crowd favourites on Sunday night, but the Swiss faced that scenario in Friday night’s Page 1-2 playoff game, bowing 8-3 to Team Canada. “The main thing was the crowd in there yesterday, it was a big factor,” admitted Feltscher, who was responsible for Canada’s only loss to date here in Saint John, an 8-2 decision last Sunday night. “That was a new experience for us and having had that behind us, I think it will be a factor for tomorrow’s game. “I haven’t even given it (strategy for Sunday) that much thought yet,” she added. “I’m just very happy with the silver medal, now.” The South Koreans will return to the ice on Sunday at noon for the bronze-medal game against Russia’s Anna Sidorova. Neither country has ever won a medal in the world women’s championship. “With the fame of the sport of curling right now I think that tomorrow’s game is a very important game for South Korea,” said Kim, whose team lost the 2012 bronze-medal game in Lethbridge to Canada’s Heather Nedohin. “I think it’s the same situation as 2012. But we have the experience from that.” All playoff rounds for the 2014 Ford World Women’s Curling Championship will be televised on TSN/RDS/RDS2, the official broadcasting partner of the Season of Champions. Live scoring is available at: www.curling.ca/scoreboard/?e=58 To purchase tickets to the Ford World Women’s Curling Championship, presented by Booster Juice, go to: www.curling.ca/2014worldwomen-en/tickets/ The French version of this story will be available at www.curling.ca/2014worldwomen-fr/ as soon as possible. Follow @ccacurling on Twitter (#FWWCC) for updates during the 2014 Ford Worlds.