There was a full slate of games played at the two venues this Sunday morning as the Canadian Senior Curling Championships continue in Yellowknife, N.W.T. At the Yellowknife Curling Centre the pairings were Newfoundland & Labrador vs Prince Edward Island (women), Yukon vs Ontario (men) and Northwest Territories vs Prince Edward Island (men). In the Yellowknife Community Arena the matchups were Northwest Territories vs Ontario (women), New Brunswick vs Quebec (women), New Brunswick vs Quebec (men), Saskatchewan vs Nova Scotia (women) and Saskatchewan vs Nova Scotia (men). In the ON/NT (w) tilt, when Ontario scored, it was with crooked numerals resulting in a final score of 10-3 in eight ends. Much the same was true for the ON/YK (m) contest with the Whitehorse foursome posting the crooked numerals this time in an 11-2 final tally. 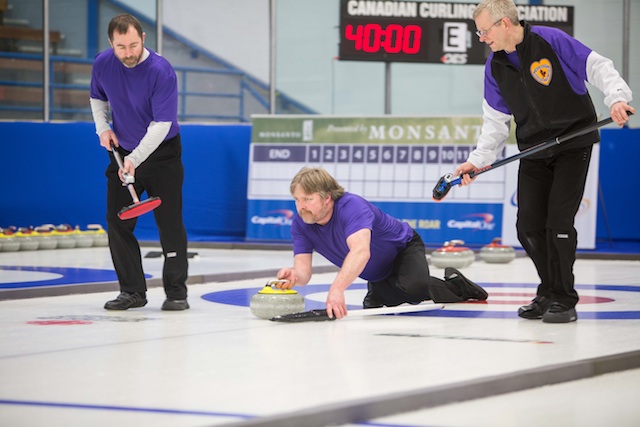 The remaining two games in the Yellowknife Curling Centre were much closer and in both cases, the team that had the one-point lead going into the last end fashioned a steal of one to win. PEI’s Jennifer Scott squad left the ice 6-4 winners over Team Newfoundland & Labrador’s Cathy Cunningham. The Northwest Territories’ Glen Hudy posted a 7-5 score over its counterparts from PEI. In games involving New Brunswick and Quebec, on both sides of the gender categories, NB came out on top, 8-5 (w) and 8-6 (m). In the game between Saskatchewan’s Lorraine Arguin and Nova Scotia’s Colleen Pinkney, a valiant flurry of scoring by Team NS came up one point short leaving the prairie foursome on top 9-8. The last game on the ice between Saskatchewan and Nova Scotia men was tied coming home at six and with last stone in the final stanza, NS skip O’Leary fashioned the one point needed for the 7-6 win. Games continue Sunday afternoon and evening. The winners of the 2014 Canadian Seniors will represent Canada at the 2015 World Senior Curling Championships, at a site and date to be announced by the World Curling Federation. Last year’s Canadian champions, skipped by Colleen Pinkney of Truro, N.S., and Wayne Tallon of Fredericton, N.B., are competing in this year’s World Seniors, April 23-30 at Dumfries, Scotland. Since the World Seniors began in 2002, Canada has won eight men’s and nine women’s titles. Draw results for the 2014 Canadian Seniors will be instantly available at www.curling.ca. For information about the event, including team rosters and event schedules, visit www.curling.ca/2014seniors-en. (Story by Bill Tschirhart)