Nova Scotia’s O’Leary stays ahead of the pack

Draw 7 in the 2014 Canadian Senior Curling Championships featured some pivotal games as the standings start to take shape after three full days of round robin play. (Report by Bill Tschirhart)

The Team NS (O’Leary) men maintained its unblemished record with a last stone 8-5 win over a former CSCC champion from MB (Robertson). The lead in this game changed hands a few times but as the Bluenosers will tell you, you only have to be ahead at the end! Manitoba and Nova Scotia tangled in another key contest on the women’s side of the ledger. The front-running buffaloes met a determined former CSCC champion from Truro (Pinkney). Going into the 10th with a one-point lead but without last stone advantage, Nova Scotia ran the Manitobans out of stones to notch the 9-7 victory. 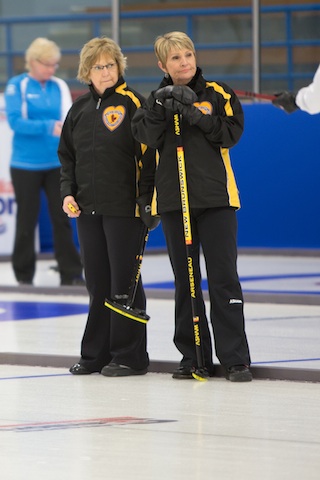 In the other two women’s games, Team AB (Bakker) scored three in the 10th end to break a 5-5 tie with the home town Northwest Territories team (McKellar-Gillis) and left the ice with an 8-5 win while the Alberta men (Johnson) defeated Glen Hudy’s Northwest Territories men, 11-2. In the arena on sheet A the men’s team from Kitchener-Waterloo, ON (Mellor) bested the quartet from Victoria, B.C. (Craig) to the tune of 10-5. In a men’s tilt that required an extra end, Robbie Gordon’s Northern Ontario squad from Sudbury, Ont., scratched out a narrow 7-6 win over Team SK (McKee) with a last-stone draw to the four-foot. In the women’s version of NO vs SK, Team SK (Arguin) topped Team NO (Barrett) by scoring three in the final end for an 8-5 win. The final game of the afternoon pitted the women from Parksville, B.C., (Shantz) against the east coast islanders from Montague, P.E.I. (Scott). Shantz scored four in the third end on the way to a 9-4 win. Games continue this evening at the Yellowknife Curling Centre and the Community Arena. A full slate of eight games is scheduled! The winners of the 2014 Canadian Seniors will represent Canada at the 2015 World Senior Curling Championships, at a site and date to be announced by the World Curling Federation. Last year’s Canadian champions, skipped by Colleen Pinkney of Truro, N.S., and Wayne Tallon of Fredericton, N.B., are competing in this year’s World Seniors, April 23-30 at Dumfries, Scotland. Since the World Seniors began in 2002, Canada has won eight men’s and nine women’s titles. Draw results for the 2014 Canadian Seniors will be instantly available at www.curling.ca. For information about the event, including team rosters and event schedules, visit www.curling.ca/2014seniors-en.