Canada gets back on track at World Men’s Championship

BEIJING — A mid-game momentum swing was precisely what Team Canada needed on Sunday night to get back into the win column at the 2014 World Men’s Curling Championship, presented by Ford of Canada. 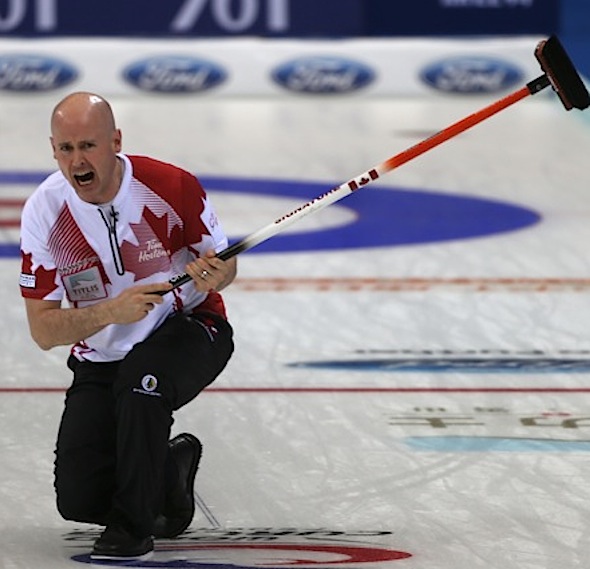 Kevin Koe’s Canadian team from Calgary — third Pat Simmons, second Carter Rycroft, lead Nolan Thiessen, alternate Jamie King, team coach John Dunn, national coach Rick Lang — had spent a frustrating few hours at Capital Indoor Stadium earlier Sunday in losing 9-6 to Japan’s Yusuke Morozumi. And in the back half of the all-Asia doubleheader, the Canadians were down 3-1 to China’s Rui Liu, having given up an ugly steal in the fourth end when Koe’s last-rock open takeout to score two overcurled to give the Chinese a point out of nowhere. But when it needed it most, Canada generated a deuce in the sixth, then ratcheted up the pressure in the seventh to steal three when Liu’s last-rock draw was wide. That five-point swing would propel Canada to a 9-6 victory to finish off a 2-1 opening weekend in Beijing. “Obviously it’s a long week, but you don’t want to get yourself behind the 8-ball early, so obviously it was important to get some stuff figured out,” said Simmons. “It was a good, gutsy win for us, for sure.” It was a weekend spent adjusting to ice conditions, as the Canadian icemaking tandem of Hans Wuthrich and Greg Ewasko work with a building that features various challenges, not the least of which was a contaminated water supply. That has led to some uncharacteristic misses, such as Koe’s in the fourth end against China. “I didn’t think I threw it too bad in the fourth,” said Koe. “Sometimes you throw it and you think you know what it’ll do and it still doesn’t do that. So that’s frustrating. We’re used to a little more out of ourselves, so we just have to realize that it’s tough for both teams and we have to stick with it.” 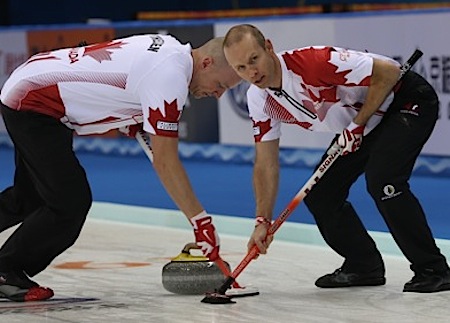 “You just have to accept that there’s going to be some nuances on each sheet,” added Simmons. “If you can get control of the game and make the other team play those hard shots, then it’s obviously a big advantage. We were able to do that and make him shoot against a few of our rocks the one end (the seventh) and we were lucky enough to get the steal. Yeah, we’ll take it.” History would indicate that the ice conditions will continue to improve as the week goes on, suggested Koe. “They’re the best in the world,” he said, referring to Wuthrich and Ewasko. “I can only see the ice getting better.” The Canadians are back on the ice for a pair of games on Monday, taking on Russia’s Evgeny Arkhipov (1-2) and Jíri Snítil of the Czech Republic (1-2). In other Sunday night games, Norway’s Thomas Ulsrud pulled into a first-place tie in the 12-team round-robin standings at 3-0 with Germany’s Johnny Jahr with a 9-5 win over the Czechs. “This is good for Team Norway,” said Ulsrud. “Usually we are slow starters. Everybody is finding this ice a little bit tricky but it’s working good for Team Norway.” Also, Switzerland’s Peter de Cruz (2-1) was a 6-5 winner over Denmark’s Rasmus Stjerne (0-3), and Japan (2-1) added to the misery of Scotland’s Ewan MacDonald (0-3) with a 9-4 triumph. Germany, Sweden’s Oskar Eriksson (2-1), Russia and Pete Fenson of the United States (1-2) all had byes on Sunday night. Here is the remainder of Team Canada’s round-robin schedule, including broadcast plans (all times Eastern): March 30 — vs. Russia (Evgeny Arkhipov), 9 p.m. March 31 — vs. Czech Republic (Jirí Snítil), 7 a.m. (live, TSN/RDS2) April 1 — vs. U.S.A. (Pete Fenson), 2 a.m. April 1 — vs. Norway (Thomas Ulsrud), 7 a.m. (live, TSN/RDS2) April 1 — vs. Switzerland (Peter de Cruz), 9 p.m. April 2 — vs. Sweden (Oskar Eriksson), 7 a.m. (live, TSN/RDS2) April 3 — vs. Germany (Johnny Jahr), 9 p.m. April 3 — vs. Scotland (Ewan MacDonald), 2 a.m. (live TSN/ tape delay, 7 a.m. RDS2) For Team Canada updates, go to www.curling.ca. Follow us on Twitter, @CCAcurling. For live scoring, standings and team lineups from the 2014 World Men’s Curling Championship, go to: wmcc2014.curlingevents.com/ The French version of this story will be posted as soon as possible at www.curling.ca/fr