BEIJING — Team Canada has fallen short in its bid for a medal at the 2014 World Men’s Curling Championship, presented by Ford of Canada. 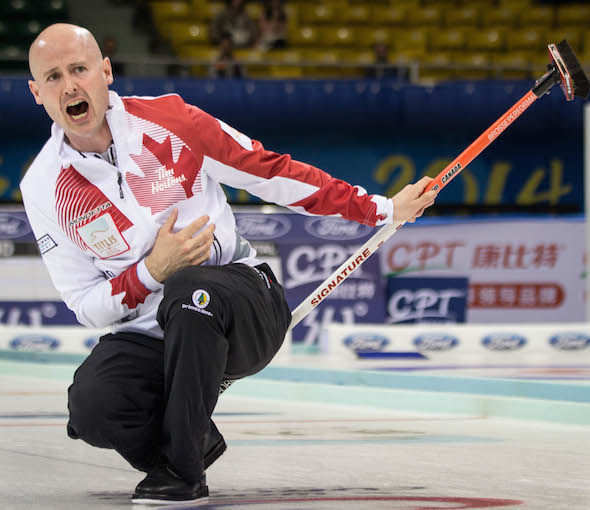 Kevin Koe’s Canadian team from Calgary — third Pat Simmons, second Carter Rycroft, lead Nolan Thiessen, alternate Jamie King, team coach John Dunn, national coach Rick Lang — bowed 7-5 to Switzerland’s Peter de Cruz on Sunday at Capital Gymnasium in the bronze-medal game. The Swiss stole single points in the first two ends, and padded their lead with deuces in the sixth and ninth ends en route to the victory. “We definitely didn’t want to lose that game,” said Thiessen. “But after yesterday, it was tough to get fired up. But no excuses. They played better than us.” 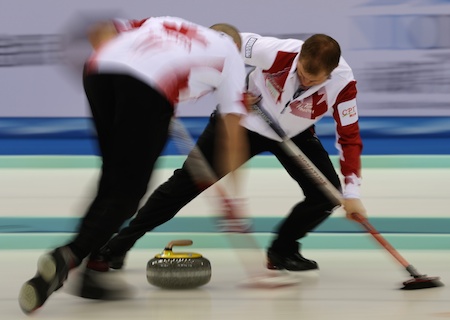 Team Canada had two chances on Saturday to reach Sunday’s gold-medal game, but fell short to Norway’s Thomas Ulsrud in the Page playoff 1-2 game, and then to Sweden’s Oskar Eriksson in the semifinal. Norway will play Sweden for the gold medal at 3 a.m. Eastern on TSN. “I thought we played well in the one-two game and the semi,” sad Koe. “We were very close. But in games like that where the other teams are playing well, you have to make the last shot of the end sometimes and we let our chances slip away.” That, suggested Lang, is the nature of the World Men’s Championship, and added there’s no reason to push any panic buttons, considering Canada has finished in the top six at every international curling event this season — a feat no other country can claim. That total includes two Olympic gold medals (skips Brad Jacobs and Jennifer Jones), a Paralympic gold (Jim Armstrong), gold at the World Junior Women’s (Kelsey Rocque), a World Women’s silver medal (Rachel Homan) and a men’s Winter Universiade bronze medal (Brendan Bottcher). 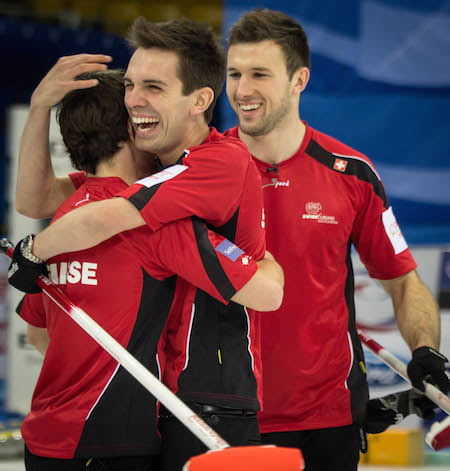 “Twenty-four hours ago, we were within a shot or two of being in the final here,” said Lang. “And then we have a bad 24 hours and that chat starts. But we had a great team here. They didn’t play like themselves the last couple days, but they were worthy Brier champions. We sent a great team here. They just didn’t have a good day, and that can happen to anybody. The level of competition here is strong and getting stronger. We just have to answer the bell, that’s all.” “For sure, it’s tough,” added Koe. “The world championship isn’t the way it used to be; I think most people who play in them will tell you every game is tough. There are a lot of good teams, they’re out playing the Slams. They get up to play their best game against Canada, no matter who it is, and they usually do play their best.” Koe said he was proud of the way the team performed in Beijing. “That’s the way we’ve always done things,” he said. “Some people might not like our style or our game. But we fight. It’s not always the prettiest, but we get things done. I’m proud of the guys. We had a great run. World championship, two Brier titles, a Brier final — obviously this was very disappointing, but it’s been a great team.” For Team Canada updates, go to www.curling.ca. Follow us on Twitter, @CCAcurling. For live scoring, standings and team lineups from the 2014 World Men’s Curling Championship, go to: wmcc2014.curlingevents.com/ The French version of this story will be posted as soon as possible at www.curling.ca/fr