A motivated group of Quebec Bantam curlers and their coaches recently had an opportunity to hone their competition skills at a camp designed for teams with their sights set on representing their province at the 2015 Canada Winter Games. Ten boys’ and eight girls’ teams, with their coaches, met at the Town of Mount Royal Curling Club in Montréal April 5-6 for the third of three development sessions aimed at preparing for the Canada Games selection process. The teams had already attended two previous camps, in Boucherville a year ago, and in Sorel-Tracy in November 2013. 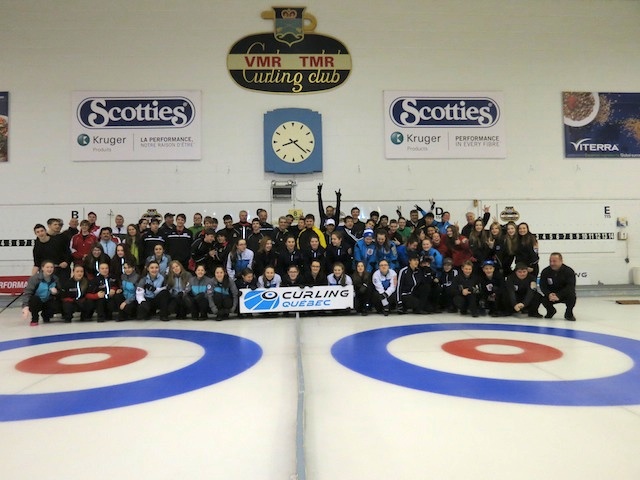 “The year preceding the Canada Winter Games is an exciting time for Bantam-aged curlers,” says Jen Ferris, National Coaching Certification Program (NCCP) Transition Consultant for the Canadian Curling Association. “Most provinces/territories will run talent identification/training camps for the athletes who are in contention to represent their Member Association at the Games.” At the most recent camp, activities included an evaluation of the young athletes’ physical skills (aerobic ability, strength, flexibility, power), as well as delivery skills analysis (balance, line of delivery, power, speed control) and sweeping (power, stance, communication, timing). Curlers and coaches also learned about annual team planning, pre-game routine, stress control and team dynamics. Marco Ferraro, Director General of Curling Quebec, says that camps like this give kids a chance to learn from expert instructors and develop their identities as athletes who are important to their provincial curling association. “(They) get to know other teams better, so it is easier to make up teams in the future,” he says. “The coaches and athletes improved from camp to camp. Collaboration replaced competition.” The energy level was very high and positive,” he says. While the coaches shared tricks and tips, the curlers were encouraging each other to do better at all the tests, helping them develop what he calls “a better sense of WE.” Both Ferraro and Ferris agree that the benefits to camps like this extend beyond the upcoming Canada Winter Games. “The goal isn’t just to win the province, but to perform well at the national level,” says Ferraro. “Curling Quebec’s program is one of many great examples of how many athletes and coaches can benefit from the testing and training offered,” adds Ferris. “And they can then carry that information forward in their athletic careers. These camps are integral in supporting our long-term athlete development model and our goal of identifying and training our top talent at an even younger age.”