The 2014 World Mixed Doubles Curling Championship is underway in Dumfries, Scotland, where Team Canada’s Wayne and Kim Tuck lost a close opening match to Sweden’s Camilla Johansson and Per Noreen on Thursday morning. 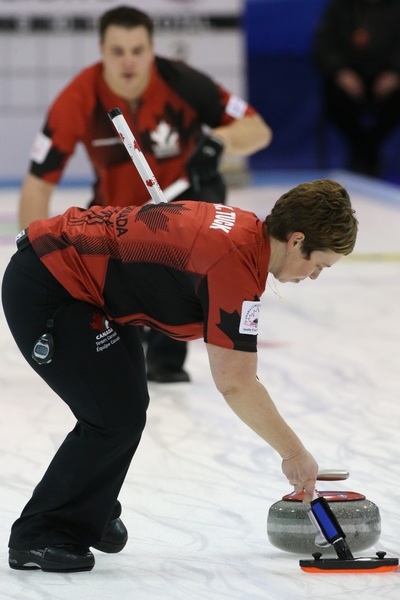 The Tucks, who have Jim Waite with them as team coach, prevailed at the 2014 Canadian Mixed Doubles Trials last month in Ottawa, and will be looking for Canada’s first gold medal at the event. In today’s game, the husband-and-wife team from Ilderton, Ont., gave up single steals in the first two ends, but bounced back with a deuce in the third and a steal of two in the fourth to lead 4-2 at the break. Canada held a 6-5 lead heading into the final (eighth) end, and were set up to hold the Swedes to a single and force the extra end, but Noreen was able to nudge a Canadian counter off the button and score two for the win. Canada’s next game is Friday at 8 a.m. (local time; 3 a.m. ET) against Latvia’s Dace and Ansis Regza. Results, statistics, live video streams, news and photos from the World Mixed Doubles Curling Championship 2014 can be seen here on the World Curling Federation’s official event website: https://wmdcc2014.curlingevents.com Curling fans around the world will also be able to see a number of live games and selected highlights from the 2014 World Mixed Doubles Curling Championship via the World Curling Federation’s YouTube Channel www.youtube.com/WorldCurlingTV The full webcast schedule can be found here: https://wmdcc2014.curlingevents.com/schedule At the same time as staging the World Mixed Doubles Championship, the Dumfries Ice Bowl will also act as host to the Men’s and Women’s World Senior Curling Championships. More information about that event can be found here: https://wscc2014.curlingevents.com