A winning day for Canada at World Seniors

Wayne Tallon and Colleen Pinkney remain undefeated in their respective pools at the World Senior Curling Championships in Dumfries, Scotland, after both teams earned lopsided victories on the second day of the round robin. On Friday afternoon, Tallon and his Fredericton, N.B., team of third Mike Kennedy, second Mike Flannery, lead Wade Blanchard, alternate Charles Kingston and coach Bill Tschirhart kicked off their game against Slovakia’s Peter Mocek with five points in the first end, and stole a single in the second on the way to a 12-2 win. In the evening game, the Canadian men stole the first three ends, racking up an early 7-0 score in a 13-1 victory over Poland’s Andrzej Janowski. 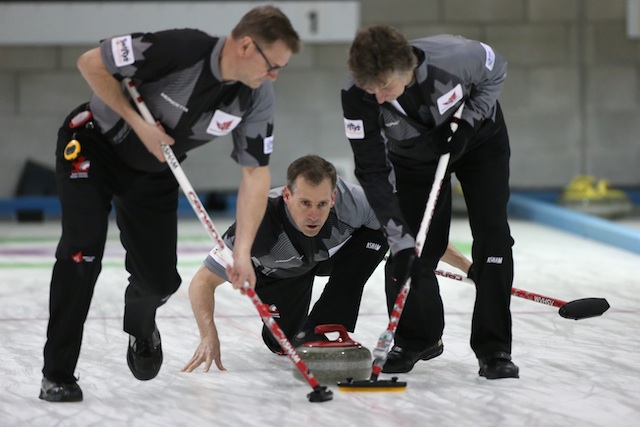 “We were able to adapt to the ice conditions,” said Tallon after the first game of the day. “This was the biggest contributing factor to our victory today.” Pinkney and her team from Truro, N.S., (third Wendy Currie, second Shelley MacNutt, lead Susan Creelman, alternate Judy Burgess and coach Bill Tschirhart) faced Italy’s Fiona Simpson in a game that was tight for the first four ends. After blanking the first end, Pinkney scored one and stole one before Italy was able to get on the board. A huge score of five points in the fifth end put Canada ahead, and the Italians were able to score only one more point before conceding a 7-2 Canadian victory. Pinkney will face Finland’s Kirsti Kauste and Australia’s Sandy Gagnon on Saturday as the round robin continues. On the men’s side, Tallon and crew will take on Norway’s Tormod Andreassen and Latvia’s Pēteris Šveisbergs. 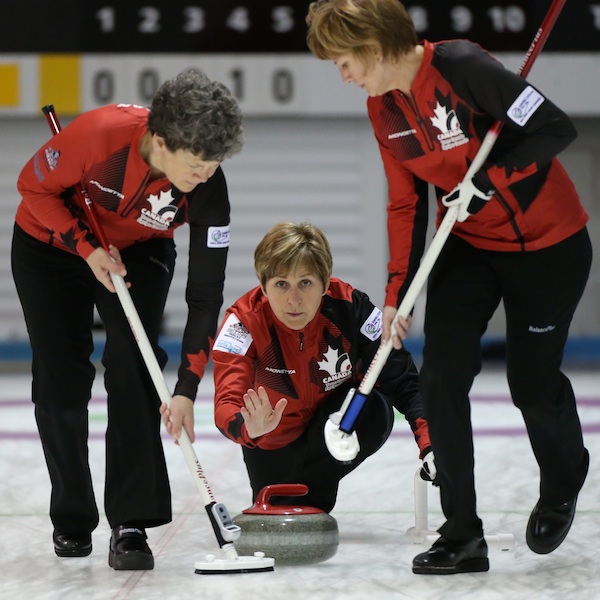 Tallon offered kudos to the event organization, something he knows about, having been the host committee executive director for the 2013 championship held in his hometown of Fredericton, N.B. “By the way, the ice is perfect,” he said about game conditions at the Dumfries Ice Bowl. “The organizers have done everything perfectly. They came to Canada last year, got a couple of tips and they made a perfect tournament here. The venue is absolutely perfect.” The round-robin draws for the World Seniors will run through to April 29 before the playoffs get underway. There are 25 senior men’s teams, split into three pools (one nine-team pool, two eight-team pools); 15 senior women’s teams, split into two pools (one eight-team pool, one seven-team pool). On April 30, the senior men’s and women’s gold-medal and bronze-medal games are scheduled for 7:30 a.m. Eastern. For live scores and standings from the World Seniors Championship, go to: wscc2014.curlingevents.com/.