The playoff teams are set after a dramatic finish to Day 5 at the 2014 Canadian Wheelchair Curling Championship in Boucherville, Que. 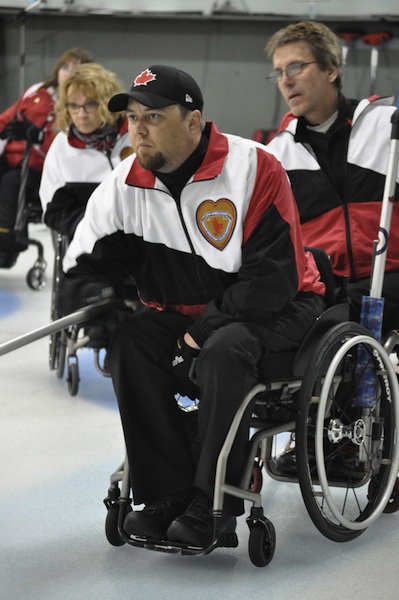 In a head-to-head battle between the two leaders in the final round robin draw, Quebec’s Benoit Lessard came from behind to defeat Ontario’s Mike Munro 6-5 and claim first place and last-rock advantage in the Page 1-2 playoff game. Lessard trailed 5-1 after five ends but climbed back with a score of three in the sixth and singles in the final two ends to steal the win. The victory means Quebec finishes in first place with an 8-1 record just ahead of Ontario, who finishes at 7-2. The leaders will meet again in the Page 1-2 game Saturday at 2 p.m. (ET). Tie-breakers were needed to determine the final two playoff teams after B.C., Saskatchewan, Manitoba and Alberta all finished the round robin with matching 5-4 records. In the first tie-breaker, Manitoba’s Dennis Thiessen stole three ends against Saskatchewan’s Darwin Bender to go ahead 6-2 after six ends. Despite giving up a steal of two points in the final end, Manitoba came out on top of a 6-5 score and will move on to the Page 3-4 playoff. Tie-breaker number two between B.C.’s Darryl Neighbour and Alberta’s Jack Smart was a thriller that featured Alberta stealing the last two ends to tie the game at 9-9, and then stealing another point in the extra end to win 10-9 and move on to the playoffs. This means Manitoba finishes in third place and Alberta fourth, by virtue of their record against each other in the round robin, and they will meet in the Page 3-4 playoff on Saturday at 6 p.m. (ET) The semifinal will be played on Sunday at 10 a.m., and the championship final takes place Sunday at 2:30 p.m., all times ET. Live streaming of the event is available at https://www.ustream.tv/channel/wcblog2
Draw results and other event information is available at www.curling.ca and www.curling.ca/2014wheelchair-en.
Since the inaugural Canadian championship in 2004, British Columbia has four titles – in 2007 (skip Darryl Neighbour), 2008 and 2009 (skip Jim Armstrong) and 2010 (skip Gary Cormack). Team Canada (skip Chris Dawe) has three victories (2004-2006) while Manitoba (2011) , Saskatchewan (2012) and Quebec (2013) have each won once.