For the past six months, Brad Jacobs and his team have been riding the high that comes with an Olympic gold medal. This weekend in Brockville, Ont., however, Jacobs, Ryan Fry, E.J. Harnden, and Ryan Harnden, are finally back on the ice, and taking their first steps towards potentially winning another gold in Pyeongchang, South Korea, in 2018. 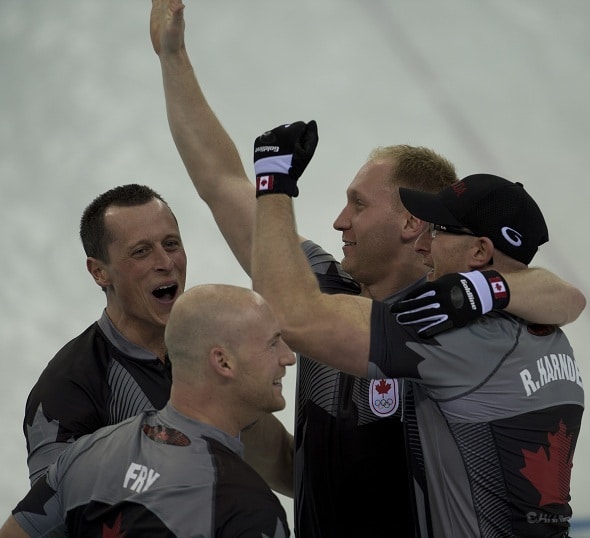 Team Jacobs, from Sault Ste. Marie, Ont., will be looking to earn their first Canadian Team Ranking System points of the 2014-15 season at the World Curling Tour’s AMJ Campbell Shorty Jenkins Classic, an event it won last year. CTRS points earned this season help teams qualify for bigger events down the road, and eventually can put them in contention for Canada’s coveted Olympic spot. Also kicking off their season will be two of the all-time greats, albeit with unfamiliar lineups. Both Glenn Howard (Coldwater, Ont.) and Jeff Stoughton (Winnipeg) have won Canadian and world championships (not to mention “the Shorty” a few times each), but this season they were forced to make changes to their rosters due to players moving on to other teams. To fill the empty spots, Howard called former vice-skip Richard Hart out of retirement, and went out of province to pick up Stoughton’s former third Jon Mead to take over at second. Stoughton’s new squad features former Tim Hortons Brier teammate Rob Fowler at third, and a young front end in Alex Forrest and Connor Njegovan. All the rinks in the 24-team event will be playing for their share of $45,400 and maximum CTRS points. With six of the top 10 teams in the field (based on World Curling Tour rankings), the winner will take home 40 points, and will immediately jump to first place in the CTRS standings. In a star-studded field of national and world champions, Jacobs and his crew aren’t the only Olympians. Two 2014 medallists, David Murdoch of Scotland (silver) and Niklas Edin of Sweden (bronze), will also participate, as will 2006 gold-medallist Brad Gushue of Newfoundland. Edin has three new players with him this season, and Gushue has been reunited with his Olympic third Mark Nichols, who spent the previous three seasons in Manitoba playing with Stoughton. On the women’s side, Ottawa’s Rachel Homan will get her season underway, following back-to-back Scotties Tournament of Hearts Canadian championships. She’ll face off against a slew of Ontario teams, featuring Tim Hortons Roar of the Rings finalist Sherry Middaugh (Coldwater, Ont.), and 2012 Ontario champ Tracy Horgan of Sudbury, Ont. The only international flavour in the 12-team women’s event comes in the form of Scotland’s Eve Muirhead, who represented Great Britain in the Olympics, winning bronze, and was the 2013 World Champion. As CTRS points are calculated by the strength of field, the women’s event won’t offer as many points as the men. With three of the world’s top 10 in the mix, however, there are still some valuable points, and cash, up for grabs. Play starts on Thursday afternoon. On Friday, three other World Curling Tour events get underway: the Cloverdale Cashspiel in Cloverdale, B.C.; the Nutana SCT Classic in Saskatoon, and the Twin Cities Open in Blaine, Minn. For results, check out www.worldcurl.com