Another victory for Team Jacobs

Brad Jacobs and his team picked up exactly where they left off. 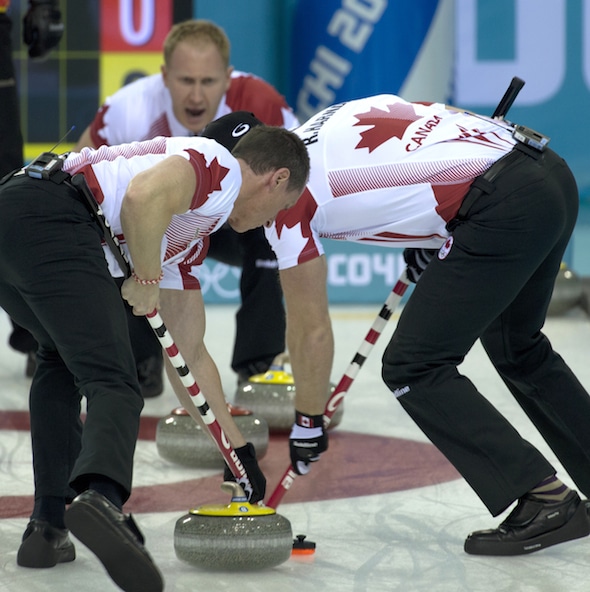 After a two-season run that saw them win almost everything they entered, the top-ranked team in the world was ready to get back on the ice and defend their title at the World Curling Tour AMJ Campbell Shorty Jenkins Classic … another event they won last year. Mission accomplished, as Jacobs, Ryan Fry, E.J. Harnden, and Ryan Harnden ran the table with a perfect 8-0 record, beating Charlottetown’s Adam Casey in the final. For the win, the Sault Ste. Marie, Ont., foursome took home $10,500 and 40 points on the Canadian Team Ranking System. Casey cashed in for $7,500 and 25 CTRS points, not to mention an early season dose of confidence for his new team from Prince Edward Island. The points get Team Jacobs on the CTRS leaderboard in this young season, but not in the top spot. Toronto’s John Epping gained 20 points for his semifinal finish, which keeps him 2.5 points ahead of Jacobs. Epping previously had points from losing the final of the Stu Sells Tankard earlier this month in Oakville, Ont. Glenn Howard and his Penetanguishene, Ont., team also got their first 20 CTRS points of the season for reaching the semifinal. Jeff Stoughton (Winnipeg), Brad Gushue (St. John’s), and Don Bowser (Kingston, Ont.) each took home 15 points for reaching the quarter-finals. In the women’s event, Sherry Middaugh (backed up by third Jo-Ann Rizzo, second Lee Merklinger and lead Leigh Armstrong) beat Scotland’s Eve Muirhead in the final, and earning $6,400. Because it was a smaller event and had fewer highly ranked teams, the win only gained Middaugh 13.56 CTRS points, enough to move her into third place behind Alberta’s Chelsea Carey and Ontario’s Julie Hastings, who gained 7.91 points for her semifinal finish. Ottawa’s Rachel Homan started strong, winning four of her first five games, but fell to Muirhead in the other semifinal. She also earned 7.91 points, her first CTRS result of the season. Elsewhere on the WCT, Grant Dezura of Maple Ridge (vice-skip Kevin MacKenzie, who throw last rocks, second Jamie Smith, lead Kevin Recksiedler) shaded New Westminster’s Sean Geall 6-5 in an all-B.C. men’s final of the Cloverdale (B.C.) Cashspiel. On the women’s side, Sijia Liu (third Rui Wang, second Jinli Liu, lead Xinna Yu), who represented China at the Ford World Women’s Championship last March in Saint John, N.B., defeated Victoria’s Sarah Wark 5-2 in the final. Next week, things will get interesting with major bonspiels happening across the country, and in Europe. Both the men and women have four separate events on the World Curling Tour calendar, which means there will be a lot of money, and points, up for grabs.