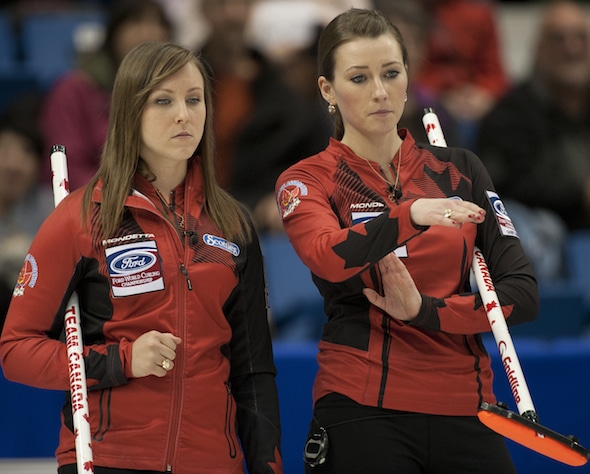 Sunday afternoon, other WCT bonspiels wrapped up in Nova Scotia and Ontario, while the playoff picture became clearer for the big men’s event in Saskatchewan. On Monday evening, Winnipeg’s Mike McEwen (backed up by third B.J. Neufeld, second Matt Wozniak and lead Denni Neufeld) took down Toronto’s John Epping, 5-4, in the final of the Point Optical Curling Classic in Saskatoon, taking home $11,000, 40 CTRS points, and the top spot on CTRS leaderboard. Epping, now in second place on the CTRS, earned $8,000 and 25 points. Brad Jacobs, from Sault Ste. Marie, Ont., and Brad Gushue, from St. John’s, were semifinalists, and each took home 20 points. The four semifinalists now rank first through fourth on this year’s points list. The results in Stockholm also shook up the women’s CTRS standings. Homan took home 25 points, and moved into the top spot, while Jones earned her first 20 points of the season, and currently sits in fourth. Sherry Middaugh, of Coldwater, Ont., also made the trip, losing to Sigfridsson in the quarter-finals, which gained her 15 points, and put her in second place on the CTRS. Also significant was that all three Canadian teams (all members of the 2014-15 National Team Program) reached the eight-team money round in a talent-filled international event. All three teams will be at the 2014 Home Hardware Canada Cup of Curling, presented by Meridian Manufacturing, Dec. 3-7 in Camrose, Alta. Also in the field will be McEwen, Jacobs and Gushue. Meanwhile in Ontario, Toronto’s Julie Hastings (third Christy Trombley, second Stacey Smith, lead Cheryl McPherson) won the KW Fall Classic in Waterloo, Ont., which earned her 6.2 points, but keeps her in third place. Hastings has earned points in all three of her events this season, and currently sits 17th on the WCT Order of Merit, which determines qualifiers for Grand Slam events. This weekend held a bit of extra weight, as it was the last chance qualify for the first Grand Slam of Curling event of the season. The top 15 on the WCT Order of Merit will be invited to the Masters of Curling in Selkirk, Man., which will start Oct. 28. Currently, Edmonton’s Chelsea Carey sits in the 15th spot, and should be the last guaranteed entry into the event. She had to wait and see if Switzerland’s Michèle Jäggi was able to score enough points in Sweden to pass her. Jäggi only mustered five points in Stockholm, not enough to get out of 16th place. Winnipeg’s Jeff Stoughton is currently sitting 15th on the men’s Order of Merit. After claiming five points in Saskatoon, he and his new team have a spot in Selkirk pretty much confirmed. The official announcement of the Grand Slam teams is expected this week. In other weekend WCT results: — Winnipeg’s Sean Grassie (third Corey Chambers, second Kody Janzen, lead Stuart Shiells) and Kristy McDonald (third Kate Cameron, second Leslie Wilson-Westcott, lead Raunora Westcott) won the men’s and women’s titles respectively at the 2014 Mother Club Fall Curling Classic at the Granite Club in Winnipeg. — Scott McDonald of London, Ont. (third Brett Dekoning, second Scott Brandon, lead Shane Konings) won the men’s title at the KW Fall Classic in Waterloo, Ont. — Jamie Danbrook (third Kendal Thompson, second Bryce Everist, lead Brendan Lavell) and fellow Haligonian Mary-Anne Arsenault (third Christina Black, second Jane Snyder, lead Jennifer Baxter) claimed the men’s and women’s crowns at the Gibson’s Cashspiel in Lower Sackville, N.S. Next week features events in Vernon, B.C., and Edmonton, although many of the top teams will be taking a weekend off.