Saskatchewan’s Max Kirkpatrick had an answer for Polar Power on Saturday afternoon at the Granite Club in North Bay, Ont. 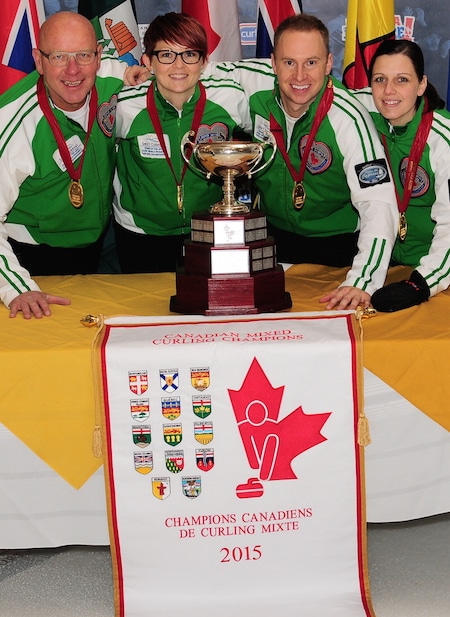 Kirkpatrick’s team from the Swift Current Curling Club — third Jolene Campbell, second Chris Haichert and lead Teejay Haichert — claimed the gold medal at the 2015 Canadian Mixed Curling Championship with a 7-4 win over Jamie Koe of the Northwest Territories. It ended the Territories’ attempt to win a first gold medal in any level at a national curling championship. For Saskatchewan, it was its 10th gold medal at the Canadian Mixed, tying the province with Alberta for tops in the category. “Oh, fantastic. Unbelievable, unbelievable,” said the 54-year-old grain farmer who calls Cabri, a hamlet 45 minutes northwest of Swift Current, his hometown. “It was just a really well-played game, both teams played really well. My team was playing so well; we kept the pressure on them, but we had to make everything. It was unreal. My team curled fantastic.” Saskatchewan had to withstand some early pressure from Koe’s team from Yellowknife (third Kerry Galusha, who is Koe’s twin sister, second Robert Borden and lead Megan Cormier). After Saskatchewan took a 3-1 lead with a third-end deuce, Koe made the shot of the championship in the fourth, negotiating a narrow port and hitting into crotch to record a triple takeout and score tying deuce. But Saskatchewan came back strongly with two more in the fifth, held the Territories to one in the sixth, and put the game away with two in the seventh. Kirkpatrick said following up Koe’s stunning shot in the fourth with a deuce in the fifth was crucial for his team “If I threw my last shot in the fourth into the boards, he doesn’t get a deuce,” said Kirkpatrick, whose team reached the final with a 7-4 win over B.C.’s Wes Craig, while the Territories advance with a 7-3 win over Ontario’s Chris Gardner. “I kind of put it in the only place I could where he could make the deuce. That was a little unfortunate, but we came right back with the deuce in five, and that was key.” With the win, the Swift Current foursome earns the right to wear Canadian colours at the inaugural World Mixed Championship in next September at a location to be announced by the World Curling Federation. “It’s unbelievable; I can’t even fathom that yet,” marvelled Kirkpatrick. “There’ll be high expectations there, too. Hopefully we can find some ice and get some games in before September. That’s actually when I’m harvesting, so I might be getting off my combine and going straight to a world championship.” While Kirkpatrick has never played internationally, all three of his teammates have. Campbell was the alternate on Amber Holland’s team that won silver at the 2011 World Women’s Championship in Denmark, while the the husband-and-wife Haicherts both won gold medals at the 2003 World Junior Championships in Flims, Switzerland. Chris played third for Steve Laycock’s men’s team, while Teejay (then Teejay Surik) was the third for Marliese Kasner’s gold-medal team. “I’m old enough and I’ve curled enough that the nerves weren’t too bad,” said Kirkpatrick, who was making his national championship debut. “But I’m curling with world champions, Brier competitors, Scotties competitors — they’re such strong players, and they made my job pretty easy. In the bronze-medal game, Gardner’s team from Ottawa (third Trish Hill, second Jon Beuk and lead Jessica Barcauskas) stole five in the fourth end en route to a 8-2 win over B.C. The 2016 Canadian Mixed Championship will be played at the Weston Golf and Country Club in Toronto.