Two lopsided wins and a tie by Team Canada in the mixed doubles Thursday added two and a half more points and gave the host country a 4.5 to 1.5 lead at the 2015 World Financial Group Continental Cup of Curling presented by SecurTek Monitoring Solutions. 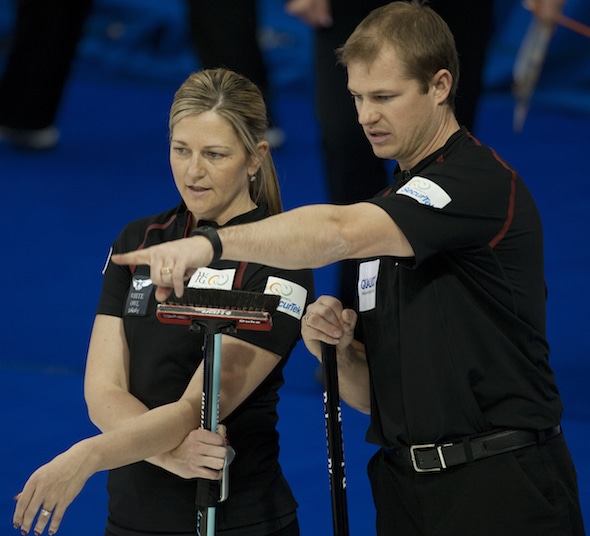 The Canadian duo of Carter Rycroft and Lori Olson-Johns jumped into a 7-1 lead after three ends and rolled to a 10-3 win over Oskar Eriksson and Ekaterina Galkina of Team Europe. Ryan Fry and Emma Miskew stole two in the second, another in the third and scored three in the seventh to get by Niklas Edin and Anna Sidorova of Team Europe 9-6. In the third match, Rachel Homan and E.J. Harnden scored one in the eighth and final end to tie Torger Nergård and Maria Prytz of Europe 5-5. In mixed doubles teams earn one point for a win and half a point for a tie. There are a total of 60 points available from the team, singles, mixed doubles and skins matches. The first team to score 30.5 points win. “When you win, you’re lovers,” chuckled Rycroft as the two teammates laughed when asked to get close together for interviews. 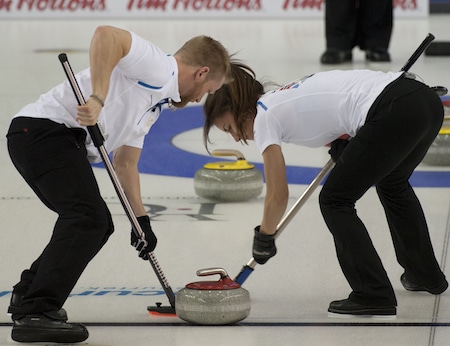 Rycroft and Olson-Johns scored three with last rock in the first end and after giving up one in the second came back with four in the third to take total control. “They didn’t play that bad and bang we have a shot at four,” said Rycroft. “It can sneak up on you so quick.” Although they had the big lead, there was no relaxing until the final stone. “A big lead means nothing in mixed doubles,” said Olson-Johns. “You can be up five and it goes like that.” Harnden and Homan were up 4-2 through six ends but Nergård and Prytz, who were inconsistent with many of their shots early, came through with the key stones to score three in the seventh and take a 5-4 lead into the eighth. Canada had an outside chance for two in the eighth but Homan’s final rock was just good enough to get the tie and the half point. “We felt we had a good game in a lot of ends but just didn’t get the right shots at the right time,” said Nergård. “You kind of expect you make the shots like normal curling but you don’t.” In mixed doubles the teams begin each end with two rocks in play – one a centre guard and the other of a different color on the back of the button. That, said Prytz, makes the first shots so important. “It’s all on you,” she said. “You don’t have sweepers to rely on, you really have to be close. Those first couple of shots have to be close.” “The key is that first shot,” agreed Rycroft. “You have to get to the face of that stone, whether you tap it back … but you have to get to the face of it.” In the morning’s team draws Canada won two of three matches – Brad Jacobs and Homan scoring victories while Sidorova got Europe’s only point with a win over Val Sweeting. In this evening’s team draw at 6:30 p.m. MT it will be Thomas Ulsrud of Norway versus John Morris of Calgary, Scotland’s Eve Muirhead taking on Olympic champion Jennifer Jones of Winnipeg and David Murdoch of Scotland playing Mike McEwen of Winnipeg. For ticket and other event information, visit www.curling.ca/2015continentalcup-en/ For the complete schedule, go to www.curling.ca/2015continentalcup-en/draw-schedule/ TSN (RDS2 in French), the exclusive television network for the CCA’s Season of Champions, will provide complete coverage of the WFG Continental Cup. This story will be posted in French as soon as possible at www.curling.ca/2015continentalcup-fr/