CORNER BROOK, N.L. — Not that Rene Comeau needed it, but the New Brunswick skip received a powerful message the night before he opened play at the 2015 M&M Meat Shops Canadian Junior Curling Championships. 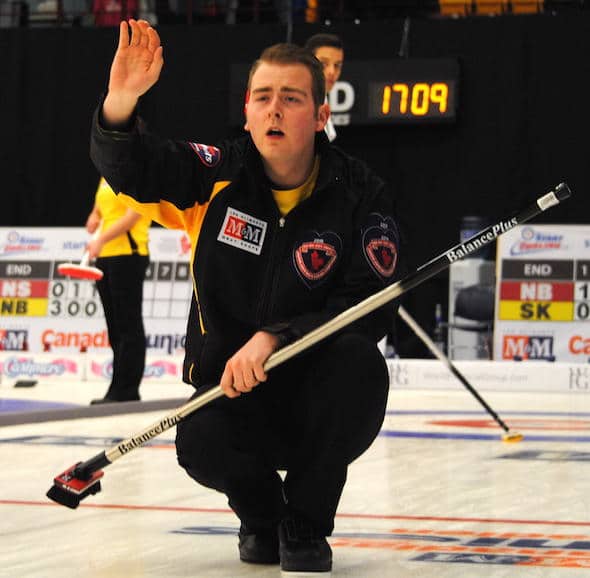 The 20-year-old customer service rep from Fredericton lost the gold-medal game at the 2014 M&M Meat Shops Canadian Juniors in Liverpool, N.S., thanks largely to a missed takeout that resulted in a game-turning steal of four for Manitoba’s Braden Calvert. He arrived in Corner Brook, N.L., looking for a shot at redemption, and at the Friday night icebreaker heard from a man who suffered the same kind of heartbreak as a junior — 2006 Olympic gold-medallist Mark Nichols. “It happens, right?” said Comeau, after an impressive 9-5 win over Saskatchewan’s Jacob Hersikorn that left the teams tied for second place in men’s Pool B with 3-1 records, behind unbeaten Karsten Sturmay of Alberta (3-0). “Mark Nichols talked about how crushing of a loss it was when he lost the (2000) Canadian junior final with Brad Gushue, and how they just kept working and came back the next year and won it (as well as the world junior title). For sure, it was inspiring. It was good to hear that; they kept fighting and good things happened for them.” Comeau didn’t take long to purge the demons of that missed shot in Liverpool; in fact, he and his team watched a replay of the game at midnight — just a few hours after the medal ceremony. “I turned my head on the one shot when we gave up the four, but it was all in good fun. It was a learning experience,” he said with a smile. “What did I take away? I probably,” he added with a laugh, “should have played the draw instead of the hit.” That’s the kind of attitude that should have Comeau and his new-look team in contention near the end of the week. Comeau and lead Ryan Freeze are the hold-overs, while third Andrew Burgess (son of former world junior champ Craig Burgess) and second Alex MacNeil (a bronze-medallist representing Nova Scotia at the 2013 M&M Meat Shops Canadian Juniors) have stepped into the lineup, replacing Jordan Craft (aged out) and Daniel Wenzek (moved to B.C.). Against Hersikorn’s team from Saskatoon, New Brunswick was able to build an insurmountable 6-2 lead and cruised home with the win. 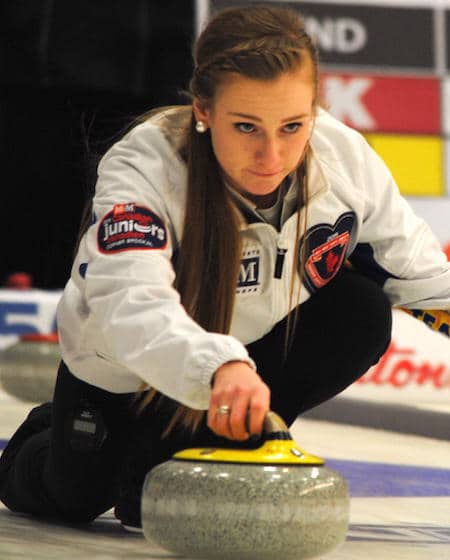 “That was really great; we needed that,” he said. “That was a big game for us, and it was nice to come out with the win. It’s such a long week and you have to remember that every game’s important. We went out there and just tried to stay positive; we knew they’d play well, they’re a tough team. But we just played our best and came out with the ‘W.’ ” Alberta (Edmonton) remained unbeaten with a well-played 3-1 win over Tanner Horgan of Northern Ontario. The Albertans stole one in the eighth to take control, as Northern Ontario (Sudbury) dropped to 1-2. Sturmay was scored at 96 per cent in the win. Meanwhile, Quebec’s Félix Asselin (Montreal) stretched his lead on top of Pool A with an 8-2 win over Newfoundland/Labrador’s Greg Smith (Stephenville). Quebec, 4-0, opened the game with a steal of three and never looked back in dropping Newfoundland/Labrador’s record to 1-2. In the other men’s game, the Yukon’s Joe Wallingham (Whitehorse; 1-3) hit the win column with an 8-5 triumph over Matthew Miller of the Northwest Territories (Inuvik; 0-3). In women’s play, B.C.’s Corryn Brown (Kamloops) won her fourth straight to maintain control of top spot in Pool B, beating previously unbeaten Kristen Streifel of Saskatchewan (Saskatoon; 3-1) 9-3. B.C. turned a tight 2-1 deficit through four ends into a laugher by scoring three in the fifth end, two more in the sixth and another three in the eighth. In other women’s games, P.E.I.’s Veronica Smith (Cornwall; 2-2) was a 7-3 winner over the Northwest Territories’ Carina McKay-Saturnino (Inuvik; 1-2); New Brunswick’s Justine Comeau (Fredericton; 1-2) downed Nova Scotia’s Mary Fay (Chester; 1-2) 8-6; and Northern Ontario’s Krysta Burns (Sudbury; 1-2) knocked off the Yukon’s Bailey Horte (Whitehorse; 1-3) 9-3. Action at the 2015 M&M Meat Shops Canadian Juniors continues on Monday with draws at 10 a.m., 2:30 p.m. and 7 p.m. (All times NST; EST plus 90 minutes). Round-robin games are taking place at both the Corner Brook Civic Centre and the Corner Brook Curling Club. Once the top three teams for each gender have been determined, all playoff games will be played at the Civic Centre. The men’s and women’s playoffs will be televised by the TSN network as well as RDS2 (French). The women’s semifinal is scheduled for Saturday, Jan. 31, at 1:30 p.m. NST/noon EST, with the gold-medal game at 8 p.m. NST/6:30 p.m. EST. This story will be posted in French as soon as possible at https://www.curling.ca/2015juniors-fr/ The full scoreboard can be viewed at https://www.curling.ca/scoreboard/