Prince Edward Island is moving on while the Yukon is going home.

Yukon skip Bob Smallwood’s last-rock freeze attempt in the 11th end just overcurled, leaving Adam Casey’s P.E.I. team with shot rock for a 7-6 win and sending the Islanders into the main draw of the 2015 Tim Hortons Brier, presented by SecurTek Monitoring Solutions. The two teams were playing the final of the pre-qualifying tournament to determine the last entry into the Brier. In the first-draw results of round-robin play, John Morris and Team Canada (Calgary) stole singles in the seventh and eighth ends to beat Reid Carruthers of Manitoba (Winnipeg) 6-4, Brad Gushue of Newfoundland-Labrador (St. John’s) scored three in the 10th to get past Steve Laycock of Saskatchewan (Saskatoon) 7-5 and Brad Jacobs of Northern Ontario (Sault Ste. Marie) beat Jean-Michel Ménard of Quebec (Quebec City) 7-4. “It’s a big relief to graduate from the pre-qualifying and move on to the big roller-coaster, I guess,” said an obviously relieved Casey, at 25 the youngest skip in this year’s Tim Hortons Brier. “Now we have a pretty quick turnaround, have to get over the high that might be right now and get ready for Ontario tonight.” Casey, third Josh Barry, second Anson Carmody, lead Robbie Doherty, alternate Robert Campbell and coach Lincoln Peters, seemed to have the game in control after three in the third end and single steals in the fourth and fifth gave them a 5-2 lead. 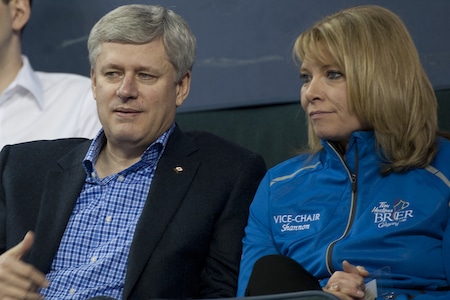 But Smallwood, third Wade Scoffin, second Steve Fecteau, lead Clint Ireland, alternate Scott Odian and coach Bill Tschirhart refused to go lightly. Yukon scored two in the sixth, one in the ninth and stole one in the10th to force the extra end. “I missed a couple there and probably made it tougher on their nerves than it needed to be,” Casey said of the fans back home watching the game. “I’m sure my mother’s in a fit back home so I apologize to her.” But he made the shots when he needed to, including his first rock in the extra end that left Smallwood needing to freeze to P.E.I.’s shot rock at the back edge of the button. Smallwood’s shot curled just a hair too much and Casey didn’t have to play his final stone. This evening’s second draw at 6:30 p.m. (all times Mountain) will see the two youngest teams in the field go head to head — P.E.I. vs. Ontario’s Mark Kean, in his Tim Hortons Brier debut. In the other games Manitoba plays Saskatchewan, B.C. takes on Alberta and New Brunswick plays Northwest Territories. 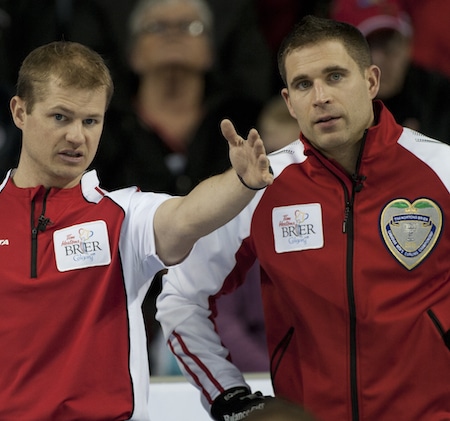 There are three draws Sunday, at 8:30 a.m., 1:30 p.m. and 6:30 p.m. TSN/RDS2, the official broadcast partner of Curling Canada’s Season of Champions, will provide complete coverage of the Tim Hortons Brier, leading to the gold-medal game on March 8 at 5 p.m. The winner of the 2015 Tim Hortons Brier will represent Canada at the Ford World Men’s Championship, March 28-April 5 in Halifax, in addition to qualifying for the 2015 Home Hardware Canada Cup in Grande Prairie, Alta., the 2016 World Financial Group Continental Cup in Las Vegas and the 2016 Tim Hortons Brier in Ottawa For ticket information, go to www.curling.ca/2015brier-en/tickets/ This story will be posted in French as soon as available at https://www.curling.ca/2015brier-fr/