SAPPORO, Japan — No hammer was no problem for Team Canada on Monday morning at the Tsukisamu Gymnasium. 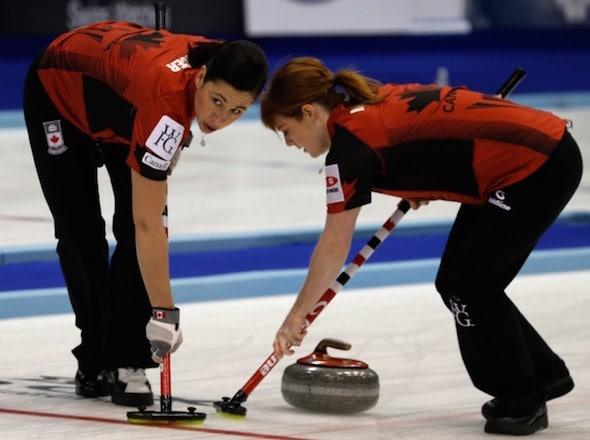 Jennifer Jones’s Canadian team from Winnipeg, bidding to win Canada’s first gold medal at the ZEN-NOH World Women’s Curling Championship, presented by Ford of Canada, since her 2008 victory at Vernon, B.C., stole six of her seven points en route to a 7-1 victory over previously unbeaten Sijia Liu of China. The result left both teams with 3-1 records, tied with Switzerland’s Alina Pätz, who also lost her first game on Monday, bowing 8-7 to Denmark’s Lene Nielsen. Russia’s Anna Sidorova, whom Canada faces later on Monday (7 p.m. local, 6 a.m. Eastern), is setting the pace at 3-0. Canada dictated the game from the start; after a blanked first end, Jones turned up the heat in the second end as vice-skip Kaitlyn Lawes set up the  first steal with two delightful draws behind a corner guard, as Liu was eventually heavy with her last-rock draw to the four-foot. “We went in and wanted to get comfortable with the ice by simplifying things a little bit in the first end,” said Jones, whose team is rounded out by Lawes, second Jill Officer, lead Dawn McEwen, team coach Wendy Morgan and national coach Elaine Dagg-Jackson. “They let us do that, so that was nice, and the second end, we made an aggressive call on Kaitlyn’s shot and ended up with the steal, which was nice.” It got nicer in the third as Jones made a perfect corner freeze to sit two with her last rock, and Liu was light with her draw, putting a stolen deuce on the board and the Canadians were in cruise control — effectively erasing any leftover bitter taste from Sunday night’s loss to Sweden’s Margaretha Sigfridsson. 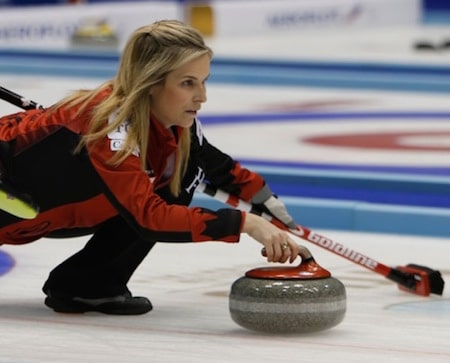 “Last night really didn’t feel that bad; it was just the last couple ends — the eighth (when Sweden scored three to take control) was really the only one that shot us in the foot,” said Lawes. “The good thing is that we still had confidence coming off the ice after the loss, and we knew that splitting was a good result (Sunday, following a win over Scotland in the afternoon draw) in the end against two tough teams. And this was a good start to today. “We really wanted to bounce back, and hopefully we can come out of today with two wins. It was nice to get off to a good start against these girls without the hammer. We were able to set things up and get some some confidence in the ice.” Canada will take on a Russian team that won bronze at the 2014 Ford World Women’s Championship in Saint John, N.B., and also won gold at the recent Winter Universiade in Spain. “We’ve played them a lot, we know they’re a great team and we know they’re playing really well here — we’ll have to play our best to beat them. Hopefully we carry what we did here into tonight,” said Jones, who noted the Russians can sometimes employ unconventional strategies. “It can be challenging in the sense that you’re not sure what they’re going to call sometimes, so you have to protect against different shots than you normally would. But at the end of the day, we just try to do our own thing and make them have to make hard shots.” Here is the remainder of Canada’s round-robin schedule, with the broadcast plans (all times ET; all games live on TSN network unless otherwise noted): March 16 — vs. Russia (Anna Sidorova), 6 a.m. March 17 — vs. U.S.A. (Aileen Sormunen), 1 a.m. March 17 — vs. Denmark (Lene Neilsen), 6 a.m. March 17 — vs. Norway (Kristin Moen Skaslien), 8 p.m. (TSN1/4) March 18 — vs. Switzerland (Alina Pätz), 6 a.m. March 18 — vs. Germany (Daniela Driendl), 8 p.m. (TSN1) March 19 — vs. Japan (Ayumi Ogasawara), 1 a.m. For Team Canada updates, go to www.curling.ca. Follow us on Twitter, @curlingcanada. For live scoring, standings and team lineups from the 2015 ZEN-NOH World Women’s Curling Championship, presented by Ford of Canada, go to: https://wwcc2015.curlingevents.com The French version of this story will be posted as soon as possible at https://www.curling.ca/?lang=fr