Pat Simmons and Team Canada stole two in the 10th end Sunday evening to score a tough 9-6 win over Sweden’s Niklas Edin and remain the only unbeaten team after five draws at the Ford World Men’s Curling Championship at the Scotiabank Centre in Halifax.

Canada improved to 3-0 with two wins Sunday and when Jialiang Zang of China scored six singles en route to a 6-2 win over Joel Retornaz to end Italy’s brief unbeaten run, Simmons and crew were alone atop the standings. “Can’t have it any better than that,” Canadian lead Nolan Thiessen said of the opening weekend. “We’re not playing perfect so there’s room for improvement. It’s a race to nine wins to get into that one-two game. That’s the biggest thing we’re worried about, to get to 9-2. The longer we stay with that bagel in the loss column the better.” In the other evening games, defending champion Thomas Ulsrud of Norway made a last-rock draw for one in the 11th to sneak past Evgeny Arkhipov of Russia 7-6, and Marc Pfister of Switzerland scored deuces in the first and fourth ends and three in the eighth to beat John Shuster of the U.S. 6-3. Canada started strong and looked in control until the middle ends when they suddenly began missing shots, opening the door for Sweden to come all the way back. “That was a mental battle,” said Simmons. “I felt we were playing really well early. I think I had a sharper stone that we didn’t catch early in the game. There were a lot of rocks that were lost, I think I had four picks myself. But we battled and hung in there.” Simmons, third John Morris, second Carter Rycroft, Thiessen, alternate Thomas Sallows, team coach Earle Morris and national coach Rick Lang scored three in the first end and after the teams traded singles the next four ends, it took a huge shot by Simmons in the fifth to keep Canada ahead. Sweden was sitting four, with hammer and a potential five-ender until Simmons, with his final stone, eliminated four stones. Edin had an easy draw for two but still trailed 5-4. After giving up one in the seventh, Sweden pulled even with two in the eighth when Simmons was light with a freeze attempt and left Edin an easy hit-and-stick for the deuce. Canada got one in the ninth and stole two in the 10th when Morris made a two excellent guards, Simmons was right on with a tap back and Edin missed with a desperation last-rock try at a raised triple. Zang, third Deji Zou, second Dexin Ba, lead Jinbo Wang and alternate Rongrui Zhang scored singles in the first two ends and never really gave Italy a chance to get back into the game. 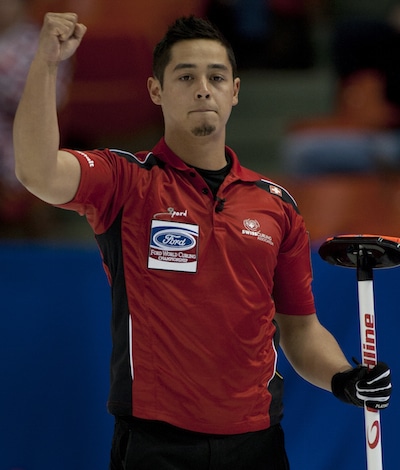 “The team is getting better, step by step,” said Zang. “I think it was very important to get this first win. Every one of us wanted to get the win and we will continue to try our best in this championship.” After five draws the standings see Canada at 3-0, Italy, Czech Republic, Japan, Norway and Switzerland all at 2-1 followed by the U.S., Russia, Sweden, China and Finland at 1-2 and Scotland at 0-3 Yusuke Morozumi of Japan (2-1), Jiří Snítil of the Czech Republic (2-1), Aku Kauste of Finland (0-2) and Ewan MacDonald of Scotland (0-3) had the byes Sunday evening. The 2015 Ford Worlds continue on Monday with draws at 9:30 a.m., 2:30 p.m. and 7:30 p.m (all times Atlantic). All Canadian games and the playoff rounds for the 2015 Ford World Men’s Curling Championship will be televised on TSN/RDS2, the official broadcasting partner of the Season of Champions. The full broadcast schedule is available at https://www.tsn.ca/2014-15-tsn-curling-broadcast-schedule-1.95515. Live scoring is available at: https://www.curling.ca/scoreboard/#/competitions/1670-2015-ford-world-men-s-curling-championship/scoreboard To purchase tickets to the 2015 Ford World Men’s Curling Championship, go to: https://www.curling.ca/2015worldmen-en/tickets/ The French version of this story will be available at https://www.curling.ca/2015worldmen-fr/ as soon as possible.