Pat Simmons of Canada and Thomas Ulsrud of Norway are heading to a rematch in Friday’s Page 1-2 playoff game at the Ford World Men’s Curling Championship.

Both teams posted impressive wins in Draw 14 Wednesday night, improving their records to 8-1 and guaranteeing them spots in the Page 1-2 game, Friday at 7:30 p.m. AT, that will send the winner directly into Sunday’s gold-medal game. Canada stole singles in the first three ends and went on to beat Ewan MacDonald of Scotland while Ulsrud started slowly but finished strong, stealing five points in the eighth and ninth ends to beat Jiří Snítil of the Czech Republic 12-5. “We had a pretty good feel for the rocks and ice and everything right off the bat,” Simmons said of his team’s showing. “We were able to put some pressure on them. I was able to make a few draws there when we needed to.” Simmons, third John Morris, second Carter Rycroft, lead Nolan Thiessen, alternate Tom Sallows and coaches Earle Morris and Rick Lang came out less than aggressively against Scotland without the hammer, putting rocks into the house instead of going with guards, and when MacDonald struggled with his draw weight, Canada stole singles in each of the first three ends. Scotland got one back in four but that would be their only point of the night. “You have to be patient, you can’t expect to blow a team out, especially a team like Scotland,” Morris said of the low-scoring affair. “Sometimes the best offence is a good defence and that was the case today.” On the next sheet, Ulsrud, the defending champion, had some initial difficulties with the Czech Republic, which scored two in the second. But Ulsrud, third Torger Nergård, second Christoffer Svae, lead Håvard Vad Petersson, alternate Markus Høiberg and coach Pål Trulsen got two back in three and surged into a 5-3 lead with three in the fifth. “It was back and forth,” Ulsrud said of the game. “Snítil played some really good shots and they got some momentum going. Finally we managed to win in the end there, a big steal of two in the eighth end, that was pretty much the game there as we were tied up until then.” 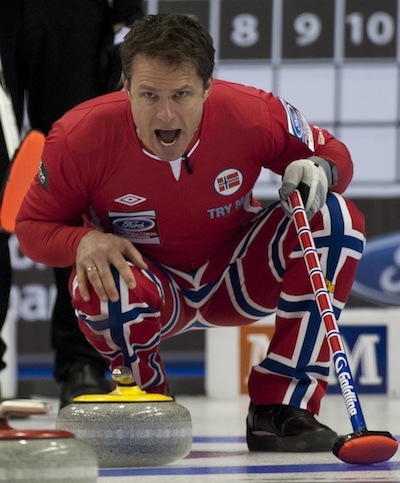 In the other evening games John Shuster of the U.S. (4-5) beat Yusuke Morozumi of Japan 8-6 (4-5) and Aku Kauste of Finland (5-4) got one in the extra end to nip Jialiang Zang of China 8-7 (3-6). Niklas Edin of Sweden (6-3), Marc Pfister of Switzerland (5-4), Joel Retornaz of Italy (3-6) and Evgeny Arkhipov of Russia (2-7) had the evening byes. The 2015 Ford Worlds continue on Thursday with draws at 9:30 a.m., 2:30 p.m. and 7:30 p.m. AT. All Canadian games and the playoff rounds for the 2015 Ford World Men’s Curling Championship will be televised on TSN/RDS2, the official broadcasting partner of the Season of Champions. The full broadcast schedule is available at https://www.tsn.ca/2014-15-tsn-curling-broadcast-schedule-1.95515. Live scoring is available at: https://www.curling.ca/scoreboard/#/competitions/1670-2015-ford-world-men-s-curling-championship/scoreboard To purchase tickets to the 2015 Ford World Men’s Curling Championship, go to: https://www.curling.ca/2015worldmen-en/tickets/