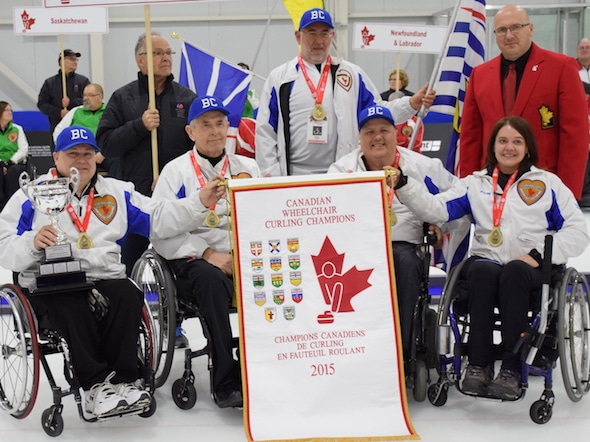 B.C. captured its leading fifth Canadian Wheelchair Curling Championship, beating the home team from Boucherville, skipped by Benoit Lessard, 11-1 in the gold-medal game. Not only was it a fifth national title for the province since the event’s inception in 2004 (and its first since 2010), it gave B.C. skip Gerry Austgarden his second gold medal after he won throwing third rocks in 2006 as a member of Team Canada, skipped by Chris Daw. Also, it was a third gold medal for vice-skip Darryl Neighbour (he won in 2007 as a skip and as a lead in 2009 for skip Jim Armstrong), and a fourth gold for second Frank LaBounty (he played vice-skip for Armstrong in 2009 and 2008, and for Neighbour in 2007). The B.C. team, coached by Brad Burton and based at the Richmond Curling Centre, was rounded out by lead Alison Duddy. Lessard’s Quebec team (third Carl Marquis, second Johanne Daly, lead Christine Lavallée, coach Germain Tremblay), was seeking its second Canadian title in three years after winning in 2013. Quebec sailed through the round robin in Boucherville, going 8-1 to finish first, and then dispatched 2014 champs Dennis Thiessen of Manitoba 12-3 in the Page 1-2 playoff game on Saturday night. But after taking a single in the first against B.C., the Lotuslanders took over, taking a deuce in the second, stealing singles in the fourth and fifth ends, and then a crushing steal of three in the sixth. The teams shook hands after B.C. stole four more in the seventh. B.C. entered the gold-medal game on a high. Earlier Sunday, B.C. ended the hopes for a gold-medal repeat from the Manitobans with a 10-3 triumph in the semifinal, thanks to a count of four in the first end, a steal of two in the second and one more in the third.