Northern Ontario’s Mike Assad admits he left his opponent a “Hackner double” to win the game and extinguish his rink’s chances at playoffs at the Travelers Curling Club Championship but he still liked his odds. “The ‘Hackner Double’ was there, for sure. Not many people can make that shot. Only a fraction of our rock was exposed for B.C.,” Assad said after the final draw of the men’s round robin at the 2015 Travelers Curling Club Championship. After Assad hit and rolled on his last rock and as British Columbia’s Kevin Britz lined up the thin double takeout as his call for his final rock, the Northern Ontario skip caught the eye of Al Hackner, who was sitting second row in the crowd at the Ottawa Hunt & Golf Club. Hackner’s son Andrew is the second on the Geraldton Curling Club rink. Al Hackner made a thin double takeout on his way to winning the 1985 Brier for Northern Ontario in what many call one of the greatest curling shots of all time. In the end Britz’s rock over-curled and crashed on the guard, and the Northern Ontario men’s rink picked up the 8-4 win. It moved the Assad rink to 4-2 in Pool B with a spot in Friday afternoon’s men’s quarter-final. 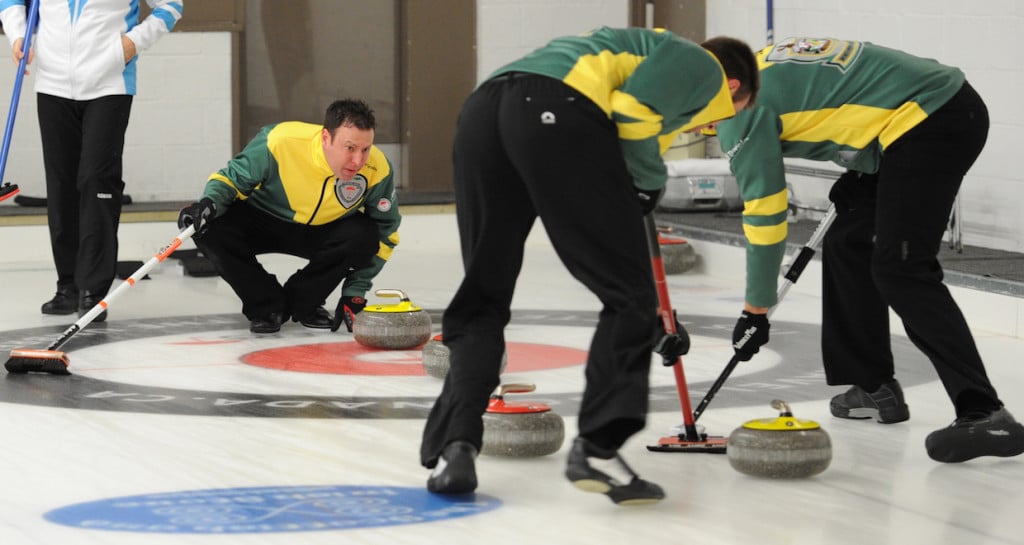 “I’ve been to a few nationals before and our goal was to make the playoffs this week, even with guys who are new to the event we wanted to put ourselves in a spot where we were still playing on Friday,” Assad said. Manitoba clinched first place in Pool B with a commanding 9-3 win over Alberta. Tyler Drews’s Fort Rouge Curling Club rink advances directly into Friday evening’s semifinal. Yukon defeated neighbouring Northwest Territories 8-1 to solidify their Friday afternoon plans with a quarter-final game now on their schedule. Newfoundland and Labrador finished atop Pool A and go directly into Friday evening’s men’s semifinal. Nova Scotia advances to the quarter-finals. A tiebreaker game between Saskatchewan and Quebec will be required Friday morning at 8:30 a.m. ET to determine the playoff bound teams out of the men’s Pool A. The final women’s round robin draw is Thursday at 7:30 p.m. ET. The 14 men’s and 14 women’s teams are split into two seven-team round-robin pools. After a single round-robin, the top three teams in each pool will make the playoffs. The first-place teams will be seeded directly into the semifinals, Friday, Nov. 27, at 6:30 p.m. (all times Eastern). The second- and third-place teams will meet in crossover quarter-finals Friday at 1:30 p.m, with the winners moving into the semis.
The gold- and bronze-medal games are set for Saturday, Nov. 28, at 10 a.m.
Selected games from the 2015 Travelers Curling Club Championships will be live-streamed at www.curling.ca/2015travelers/ Scores and standings from the event will be available at www.curling.ca/scoreboard/. For draw times, team lineups and other event info, go to: www.curling.ca/2015travelers/