The Olympic dream will become a little more real for the two teams that prevail at the 2015 Home Hardware Canada Cup of Curling, presented by Meridian Manufacturing, beginning Wednesday at Revolution Place in Grande Prairie, Alta. 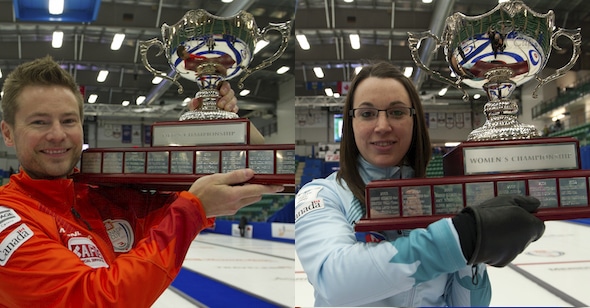 The 2014 champions of the Home Hardware Canada Cup, Mike McEwen and Val Sweeting, will be back this year in Grande Prairie to defend their titles. (Photos, Curling Canada/Michael Burns)

The elite competition, which features the top eight men’s and top seven women’s teams in Canada, will not only offer a huge prize purse of $140,000, it will send the winning men’s and women’s teams directly to Canada’s final stage of qualifying (the 2017 Tim Hortons Roar of the Rings in Ottawa) to determine our four-player teams for the 2018 Winter Olympics in PyeongChang, South Korea. Also on the line in the 12th edition of the Home Hardware Canada Cup will be berths for the winning men’s and women’s teams in the 2016 World Financial Group Continental Cup, presented by Boyd Gaming, Jan. 14-17 in Las Vegas, as members of Team North America. Former champions from the Winter Olympics, Tim Hortons Brier and Scotties Tournament of Hearts headline the field in Grande Prairie, which features: — The defending champions of the Tim Hortons Brier (Calgary’s Pat Simmons) and Scotties Tournament of Hearts (Winnipeg’s Jennifer Jones); — The defending champions of the Home Hardware Canada Cup from last year’s event in Camrose, Alta. (Winnipeg’s Mike McEwen and Edmonton’s Val Sweeting); — The next five highest qualified teams from the 2014-15 Canadian Team Ranking System. Because there was a tie for the fifth and final men’s qualifying berth between Winnipeg’s Reid Carruthers and Toronto’s John Epping, both teams were granted entry. Both reigning Olympic champions (Jones and Brad Jacobs of Sault Ste. Marie, Ont.) are in the field, as are the current run-away leaders on the 2015-16 Canadian Team Ranking System — 2006 Olympic gold-medallist Brad Gushue of St. John’s and two-time Scotties Tournament of Hearts champion Rachel Homan of Ottawa. The men’s field is rounded out by two-time Tim Hortons Brier and 2010 world champion Kevin Koe of Calgary and 2015 Tim Hortons Brier bronze-medallist Steve Laycock of Saskatoon. The other women’s teams are skipped by two-time Canadian and world junior women’s champion Kelsey Rocque of Edmonton, 2013 Tim Hortons Roar of the Rings runner-up Sherry Middaugh of Coldwater, Ont., reigning Northern Ontario champion Tracy Fleury of Sudbury and 2014 Scotties bronze-medallist Kristy McDonald of Winnipeg. TSN and RDS2 will provide complete coverage of the Home Hardware Canada Cup, from the opening draw on Wednesday (8:30 a.m. MT, 10:30 a.m. ET) through to and including the women’s (11 a.m. MT, 1 p.m. ET) and men’s (5 p.m. MT, 7 p.m. ET) finals on Sunday. Click here for the broadcast schedule. The Home Hardware Canada Cup format calls for the men’s and women’s teams to play a three-day round robin, with the first-place teams advancing to their respective finals on Sunday, while the second- and third-place teams meet in semifinals on Saturday, after any required tiebreakers, to determine the other finalists. Click here for the full draw. The total prize money is $70,000 each for men and women, with the winning teams receiving $14,000. The runners-up get $9,000 while the third-place finishers earn $5,000. Teams also receive cash for each round-robin win — $2,000 in women’s games and $1,500 for men’s games. The difference is due to the men having an additional round-robin game to play. Since its inception in 2003, the Canada Cup has been won by some of the country’s most successful curling teams. On the men’s side, Edmonton’s Kevin Martin is the only four-time winner (2005, 2006, 2009, 2011), while Edmonton’s Randy Ferbey (2003, 2004, 2007) is a three-time champion. Koe (2008), Howard (2010) and Winnipeg’s Jeff Stoughton (2012) have also emerged victorious. On the women’s side, Saskatoon’s Stefanie Lawton is a three-time winner (2008, 2010, 2012), while Jones (2007, 2011) and Shannon Kleibrink of Calgary (2005, 2009) are all two-time Cup winners. The other winners were Middaugh (2003), Colleen Jones of Halifax (2004) and Cathy King of Edmonton (2006). The Canada Cup was staged in Kamloops, B.C., from its inception in 2003 through 2008. In 2009, it was played in Yorkton, Sask., while Medicine Hat, Alta., staged the 2010 renewal, followed by trips to Cranbrook, B.C., in 2011, Moose Jaw, Sask., in 2012 and Camrose last year. The 2016 Home Hardware Canada Cup will take place in Brandon, Man.