STRATFORD, Ont. — Mary Fay is in the midst of a curling season she won’t soon forget. 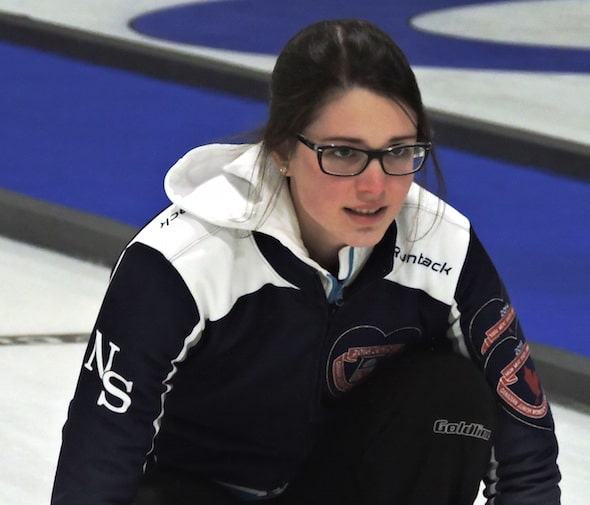 Mary Fay and her team from Nova Scotia enjoyed a perfect opening day at the 2016 Canadian Juniors. (Photo, Curling Canada)

Next month, she’ll don the Maple Leaf, along with her Nova Scotia teammate second Karlee Burgess, to represent Canada at the Youth Winter Olympics in Lillehammer, Norway.

Plenty on her mind, to be sure, but it didn’t look that way on Saturday at the Stratford Rotary Complex as she put two opening-day wins on the board, including a 9-6 win over Newfoundland/Labrador’s Brook Godsland (St. John’s) in the evening draw.

Keeping Fay’s mind on the here-and-now hasn’t been an issue, said Nova Scotia coach Andrew Atherton, whose team (based in Chester) is rounded out by third Kristin Clarke (who celebrated her 19th birthday on Saturday) and lead Janice LeBlanc.

“She’s so busy with school and curling that she just goes from one moment to the next,” said Atherton. “She’s not thinking ahead at all. If I ask her any questions about Lillehammer, she just says, ‘I don’t know. That’ll happen when I get there.’ ”

The opening ceremonies of the 2016 Canadian Juniors. (Photo, Curling Canada)

Fay, 17, is in her third Canadian Juniors; she came out of nowhere to win a bronze medal in 2014 in Liverpool, N.S., and barely missed the playoffs last year in Corner Brook, N.L. She also skipped Nova Scotia to a silver medal at the Canada Winter Games in Prince George, B.C., last year.

“Our first couple of trips to nationals, it was just about getting a feel for it,” said Fay, a straight-A student in high school. “We didn’t really know what to expect. Now that we’ve been here, we know how good the teams are, we know what it takes, and I think we’ve improved a lot. We’ve put in more training and learned a lot from the last two years.

Fay will return to Nova Scotia following the Canadian Juniors and write exams before flying to Europe, where she’ll be a part of Team Canada’s mixed team with Burgess, Tyler Tardi (who’s skipping the B.C. men here, and also is off to a 2-0 start) and Sterling Middleton.

Lots of curling, yes, but Fay’s mind is firmly planted this week in Stratford.

“This is a pretty amazing experience; it’s hard to think about Norway when we’re here because there’s so much going on,” she said. “This has been a goal ever since we started coming to nationals; this is our third year, and we want to compete at a strong level for a long time.