STRATFORD, Ont. — Once upon a time, Tyler Tardi and draw weight were not exactly on friendly terms.

That’s not helpful, to say the least, for a skip. 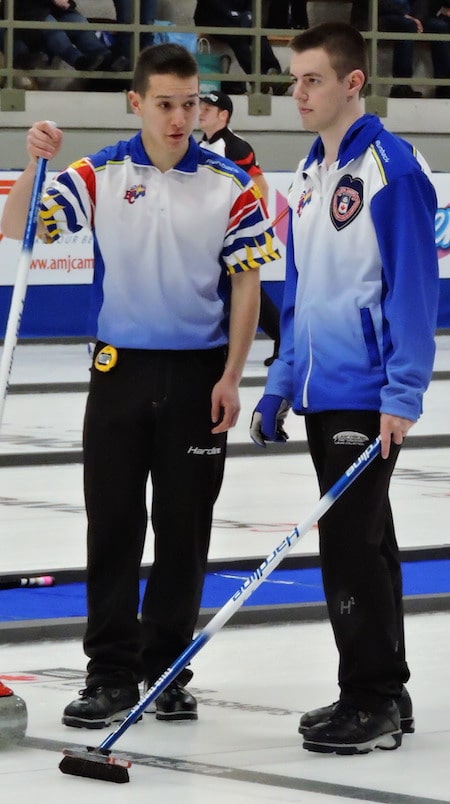 But things have changed over the past few years for the Team B.C. shot-caller, who improved to 4-0 at the 2016 Canadian Junior Curling Championship, presented by Egg Farmers of Ontario, on Sunday night with an 8-3 win over Northern Ontario’s Tanner Horgan (3-1; Copper Cliff) in an early battle of unbeatens at the Stratford Rotary Complex.

Tardi, 17, credits his extensive mixed doubles experience — he’s a two-time B.C. champion with Dez Hawes (a member of the B.C. women’s team here) — for changing his mindset about throwing draws.

“It definitely has made me a lot better at the touch game,” said Tardi, who made the playoffs at the 2015 mixed doubles nationals in Ottawa before being knocked out by four-time world champ Glenn Howard and his daughter Carly. “I used to only be able to throw hits and never make a draw if my life depended on it. But I’m definitely more comfortable with those touch shots.

“I guess I find it a bit boring to just play with no rocks in play, no angles. That’s the biggest thing I like about curling.”

It’s paid off in the early going in Stratford as the young B.C. team from New Westminster and Langley — which includes third Daniel Wenzek, second Jordan Tardi (Tyler’s older brother) and lead Nick Meister — has been coolly making every shot en route to a perfect opening weekend.

Tardi’s coach, and father, Paul Tardi said the mixed doubles discipline, which will be an Olympic medal sport in 2018, has made Tyler a better curler.

“It does change his approach, for sure,” said Paul Tardi. “I’ve seen him get into those mixed doubles ends where there’s a lot of clustering, and you get used to seeing a lot of funny angles. And he’s able to think far enough ahead that he can get teams into an end where they don’t realize they’re in trouble, and you can’t get out of those ends.

“He can call a terrific game if the team is executing the shots. But if you’re not? It can be real trouble; it’s a fine line there.”

Also remaining unbeaten in men’s play was 2013  Canadian champ Matt Dunstone of Manitoba (Winnipeg), who improved to 3-0 with an 11-6 win over Greg Smith of Newfoundland/Labrador (0-2; St. John’s).