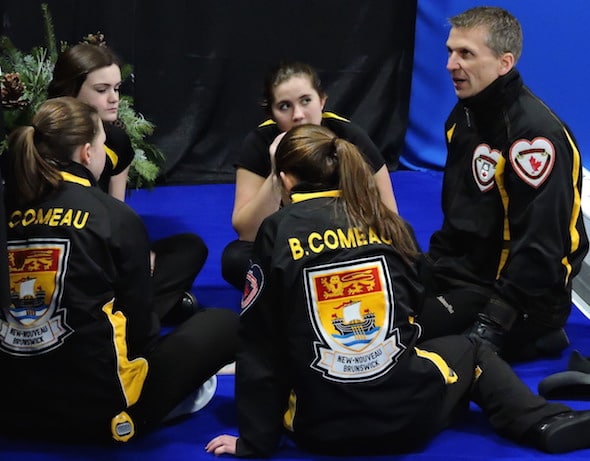 New Brunswick coach Tim Comeau, right, speaks to his team during during the fifth-end break on Monday. (Photo, Curling Canada)

At the other end, her vice-skip Emma Le Blanc was in the midst of an awkward fall onto the ice, tripping on a moving rock send in motion by Comeau’s takeout.

But the fate of her teammate was No. 2 on Comeau’s list of concerns.

“I wanted to make sure I made the shot first,” said Comeau with a laugh. “Then I could worry about Emma.”

Well, good news all around for the New Brunswick women’s team — an 8-5 win over Northern Ontario’s Megan Smith (1-3; Sudbury) to run New Brunswick’s win streak to four, and Le Blanc was just fine, thank you.

“I have no idea what happened,” said Le Blanc. “I think I tripped on a rock. It’s usually Justine who’s falling. Last year in the preliminary playdowns, she fell down and nearly broke her tailbone.

No reason to be, of course — it’s happened to every curler at one time or another, and few of them have had the chance to do it at a national championship, for a team that appears to be bound for the Championship Round with a 4-1 record.

“That was a must-win for us,” said Comeau, 17, whose team includes second (and sister) Brigitte Comeau, lead Keira McLaughlin and coach (and dad) Tim Comeau. “We know Manitoba (4-0, and New Brunswick’s opponent on Tuesday afternoon) is a really tough team, and the way we’ve been playing, we knew we would have a chance tonight. It was crucial to win that game.”

Comeau is back at her second straight Canadian Juniors after being the only skip to beat two-time world junior champ Kelsey Rocque at last year’s event in Corner Brook, N.L.

It didn’t start off so hot here as New Brunswick was blown out 12-3 by Quebec’s Laurie St-Georges in its opener, but it’s been nothing but wins ever since.

“We started off really, really rough but we’ve been able to pick it up,” said Comeau. “I’m playing better; Emma’s playing a lot better, and the other two are playing the same as they were before.

“We don’t really have any expectations, I guess, but we do expect to do well and play well, but we’re not worried about the standings. We just expect to play well and make shots.”

Manitoba’s Abby Ackland (Winnipeg; a 15-5 winner over Nunavut’s winless Sadie Pinksen of Iqaluit on Monday night), New Brunswick and Alberta’s Selena Sturmay (4-1; Airdrie) are on top of Pool A going into the final day of Preliminary Round play.

Quebec (3-2; Laval-sur-le-Lac) is close behind after a 15-4 win over Zoey Walsh of the Northwest Territories (0-4; Hay River) on Monday night.