STRATFORD, Ont. — This was no normal post-game team hug. This was four years of history being pushed aside by Team Nunavut, finally able to savour a long-desired victory at the Canadian Junior Curling Championships, presented by Egg Farmers of Ontario. 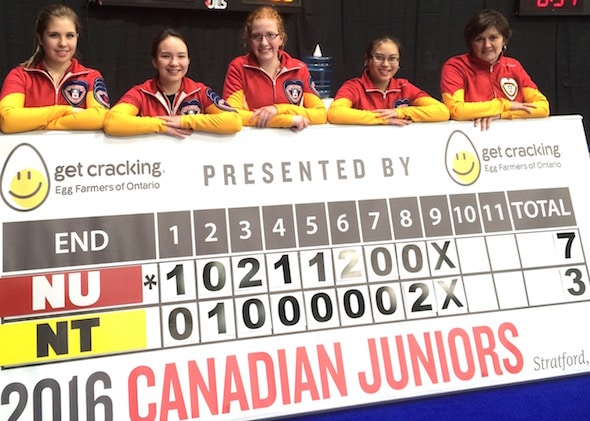 And it was only fitting that Sadie Pinksen and Christianne West were in the middle of it on Tuesday night at the Stratford Rotary Complex.

The skip and third respectively for the Nunavut women’s team have been on the ice for each one of Nunavut’s 32 consecutive losses at the Canadian Juniors.

So Tuesday night’s 7-3 win over Zoey Walsh of the Northwest Territories (0-6; Hay River) was, to say the least, satisfying.

“It was great, it was wonderful,” said Pinksen, who made her nationals debut four years ago as a 13-year-old in Fort McMurray, Alta., when Nunavut made its debut at the Canadian Juniors. “I’m really proud of my team to finally have a national win. We played a great team tonight, and I think we played great. We’re really proud of ourselves.”

With just cause, as Nunavut’s curling program, still in its relative infancy compared to the rest of the country, continues to make strides. Pinksen’s Iqaluit team, rounded out by West, second Kaitlin MacDonald, lead Melicia Elizaga and coach Donalda Mattie, has been very competitive here, and finally was rewarded on Tuesday night.

“It’s hard to go out there and lose, time after time after time,” said Mattie. “And these girls keep fighting back. They’re pretty resilient. I’m happy for all of them — they deserve this win, for sure.”

No one more than Pinksen and West, who’ve endured the losses with grace and class, while never losing the desire to get better.

“It was definitely a long journey to this point, but we stayed really strong and we’ve taken a lot from every game we played up until now, and that definitely was a factor in the way we played today,” said Pinksen, who’ll be the alternate for the Nunavut women’s team at the 2016 Scotties Tournament of Hearts in Grande Prairie, Alta.

“We knew it could be a long time (before the first win), but we were willing to fight for that. We did, and I’m really happy that we kept trying.”

Nunavut finished the Preliminary Round with a 1-5 record in Pool A, and will go into the Seeding Pool to determine the final rankings for the 2017 Canadian Juniors in Victoria.

The top four teams in each pool advanced to the Championship Round for a further four-game partial round robin from Wednesday through Friday, with their earlier records carried forward.

Meanwhile, the six teams of each gender that didn’t qualify for the Championship Round meet in the Seeding Round.

The top three teams in each gender from the Championship Round, with the first-place teams advancing directly to Sunday’s gold-medal games, while the second- and third-place teams will meet in the semifinals on Saturday.

The players from the non-playoff teams will play in a mixed doubles tournament Saturday and Sunday.

New Brunswick’s Justine Comeau (5-1; Fredericton) had clinched the Pool A title earlier in the day over Manitoba’s Abby Ackland, but Ackland’s Winnipeg team came back in the evening draw to nail down second place, also at 5-1, with a 9-6 win over Alberta’s Selena Sturmay (4-2; Airdrie). Alberta also goes to the Championship Round.

In Pool B, B.C.’s Sarah Daniels finished an unbeaten Preliminary Round with an 8-4 win over Ontario’s Courtney Auld (3-3; Thornhill). Ontario finished fourth to move into the Championship Round.

In the other Pool B game, P.E.I.’s Katie Fullerton (2-4; Cornwall) was an 11-5 winner over the Yukon’s Alyssa Meger (1-5; Whitehorse). Both teams will go to the Seeding Round, along with Newfoundland/Labrador’s Brooke Godsland (0-6; St. John’s).

In men’s play, Manitoba’s Matt Dunstone (Winnipeg), the 2013 Canadian junior champ, finished off a perfect Preliminary Round in Pool A with a 9-3 win over Quebec’s Félix Asselin (4-2; Montreal). Quebec finished second in the pool.

In Pool B, B.C.’s Tyler Tardi (New Westminster/Langley) finished on top at 6-0 (he had the bye Tuesday night), while Northern Ontario’s Tanner Horgan (5-1; Copper Cliff), who also was idle Tuesday night, was second.

Prince Edward Island’s Matt MacLean (2-4; O’Leary) knocked off the Yukon’s Brayden Klassen (0-6; Whitehorse) 10-4 in the other Pool B game. Those two teams, along with Matt Miller of the Northwest Territories (1-5; Inuvik), will play in the Seeding Round.