There was some significant star power added to the 2016 Tim Hortons Brier on Sunday.

The field was filled out for the Canadian men’s curling championship, March 5-13 at TD Place in Ottawa, with four of the biggest names in the sport winning provincial titles. 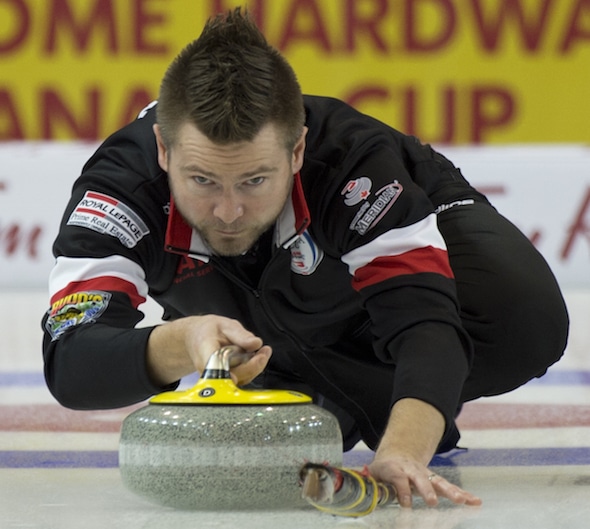 The No. 2 (Alberta’s Kevin Koe), No. 3 (Manitoba’s Mike McEwen), No. 7 (Northern Ontario’s Brad Jacobs) and No. 11 (B.C.’s Jim Cotter) on the Canadian Team Ranking System all booked trips to Ottawa with their victories.

They join a field that already was power-packed with the likes of two-time defending champion Pat Simmons and Team Canada, the top-ranked CTRS team Brad Gushue of Newfoundland/Labrador, four-time world champ Glenn Howard of Ontario, 2006 Brier champ Jean-Michel Ménard of Quebec and Steve Laycock of Saskatchewan.

Northern Ontario — Jacobs’ team from Sault Ste. Marie (third Ryan Fry, second E.J. Harnden and lead Ryan Harnden) will be looking to improve on its silver-medal result at the 2015 Tim Hortons Brier. Team Jacobs lost once in the round-robin portion of the Travelers Northern Ontario championship but got the bye to the final, and cruised to a 5-0 win over Sudbury’s Jordan Chandler in the championship game at the Granite Curling Club in North Bay. Jacobs and Co. will be looking to add to a resume that includes winning gold at both the 2014 Winter Olympics and the 2013 Tim Hortons Brier.

Manitoba — McEwen ended years of frustration with his dramatic 4-2 win over newly crowned Canadian junior men’s champ Matt Dunstone in the all-Winnipeg final. McEwen, backed by third B.J. Neufeld, second Matt Wozniak and lead Denni Neufeld, had lost five of the last six Manitoba finals, but won his first Purple Heart Sunday in Selkirk with a delicate inturn tap in the 10th end to remove Dunstone’s protected shot stone that was biting the button. McEwen finished the Viterra Championship without a loss. Dunstone, meanwhile, will be taking his team to Denmark to represent Canada at the 2016 World Junior Curling Championships, beginning March 5.

Alberta — Two-time Tim Hortons Brier champion Kevin Koe won his third straight provincial title, and second straight with his current lineup of third Marc Kennedy, second Brent Laing and lead Ben Hebert. Team Koe was an 8-4 winner over two-time world junior champ Charley Thomas in a battle of teams from Calgary’s Glencoe Club. Koe lost to Thomas earlier in the Boston Pizza Cup at Camrose, but saved his best for last. Koe won Brier titles in 2010 and 2014, and also won the 2015 Home Hardware Canada Cup in December to clinch a berth in the 2017 Tim Hortons Roar of the Rings Canadian Curling Trials in Ottawa.

B.C. — Cotter, backed up by third Ryan Kuhn, second Tyrel Griffith and lead Rick Sawatsky, nailed down his sixth Purple Heart, and third in succession, after a 7-6 win over Sean Geall of New Westminster in the final at Nelson. Cotter, representing the Vernon and Kelowna clubs, went unbeaten through the 16-team Canadian Direct Insurance provincial championship. Cotter, Griffith and Sawatsky teamed with John Morris to finish second at both the 2013 Tim Hortons Roar of the Rings and the 2014 Tim Hortons Brier.