Pandas & Golden Hawks off to Kazakhstan!

The medal round on the women’s side of the 2016 CIS / Curling Canada University Tournament had the Thompson Rivers University WolfPack against the University of Alberta Pandas for the gold medal. For the bronze medal, it was the University of Guelph Gryphons against the Dalhousie University Tigers. In the gold medal game, Kelsey Rocque and her Alberta Pandas were on the board first, taking a single point in the first end. Carynn Brown and her TRU WolfPack took a point in the second end, with their final rock being the only one left in the house. The third end saw the Pandas score one, taking a 2-1 lead through three. The gold medal game had its first blank end in the fourth, before the ‘Pack took a point in the fifth to tie the game at 2-2 heading into the fifth end break. The sixth was another single-point end, with Alberta taking a point to move into a 3-2 lead. The seventh end was the second left blank, a note indicative of the cautious and precise style of play directed by both Kelsey Rocque and Corynn Brown in the game. Through the first seven ends of the contest for the national title, there was rarely a moment with more than two rocks in the house. The game was tied up once again in the eighth end, then Corynn Brown’s WolfPack took their first lead of the game after stealing one in the ninth, on an early rock that they played almost the entire end to protect. With a rock each left to play in the tenth end, TRU had three in the four foot and led by one. Skip Corynn Brown stuck her final rock in the top foot, putting four rocks in the house for the ‘Pack before Alberta’s final throw. Pandas skip Kelsey Rocque squeezed the hammer between two WolfPack rocks at the top of the four foot, and snuck it through to score one, tying the game at 4-4 and forcing an extra end. On her final rock of the game, Brown had to play an in-turn to the four foot to push the Alberta rock back a few inches and win the game. She made the shot, and moved the Pandas’ rock in to the back of the button, but at too big of an angle, rolling off allowing Alberta to steal the final point of the game by a matter of inches. 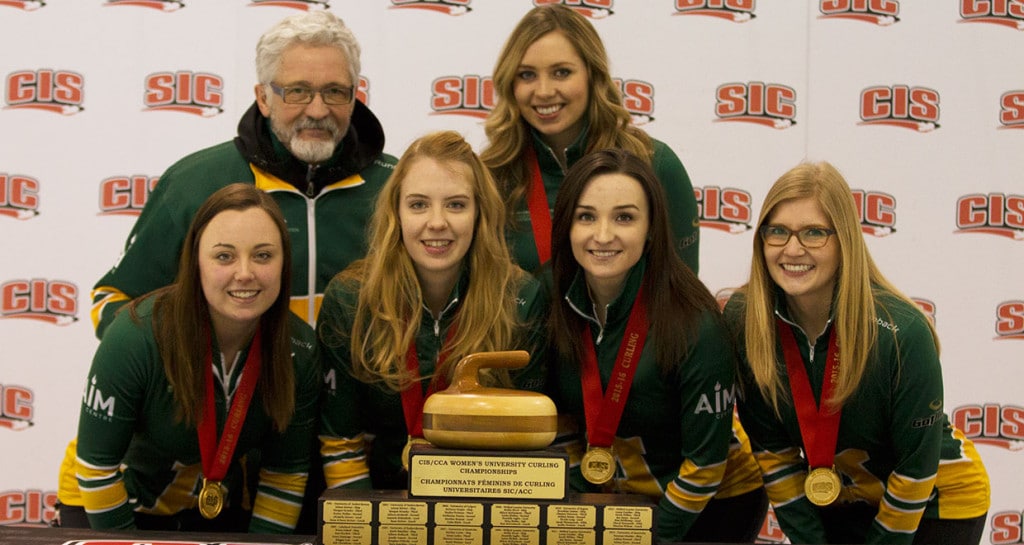 With the win, skip Kelsey Rocque adds the title of National University Champion to her two World Junior Championships. She and the University of Alberta Pandas earn the title of 2016 CIS / Curling Canada University Champions, and take the gold medal as the best university women’s curling program in the country. They also earn the right to represent Canada at the Universiade Games in Kazakhstan. Corynn Brown and the Thompson Rivers University WolfPack take the 2016 CIS / Curling Canada silver medal. The bronze medal game had a blank first end, but the Kristin Clarke-led Dalhousie Tigers jumped onto the board first, scoring two in the second. Dalhousie scored two more in the third, taking a 4-0 lead over Jestyn Murphy’s Guelph Gryphons after three ends. Guelph stole a point in the fourth, their first of the game, on a knock-out with their final stone of the end. Dalhousie scored another in the fifth, to take a 5-1 lead into the break. Guelph scored one in the sixth, cutting Dalhousie’s lead to three at 5-2. Clarke and her Tigers had a strong end in the seventh, though, increasing their lead again, this time to five at 7-2. Undaunted, Murphy took two in the eighth, as skip Murphy stuck the hammer after knocking out Dalhousie’s shot that had been closer than the Gryphon’s closest by inches. Guelph stole two again in the ninth end, pulling within one of the Tigers at 7-6 and forcing a tenth end. With three rocks at the front of the house, two for the Gryphons and one for the Tigers, Guelph skip Jestyn Murphy played a draw with her final rock, placing it on the side of the four foot, guarded by the three rocks already in play. With the hammer, Dalhousie skip Kristin Clarke played a draw as well, but couldn’t curl it around the guards enough to get shot. With the single point, won by about an inch, the Gryphons completed the comeback from 7-2, tying the bronze medal game at 7-7 after the tenth and forcing an extra end. With the final shot in the eleventh end, Kristin Clarke had a chance to win it for her Dalhousie Tigers, but her last stone picked, leaving Guelph’s shot untouched in the four foot. Jestyn Murphy’s Guelph Gryphons win the game in eleven ends, 8-7. With the win, Murphy and Guelph take the 2016 CIS / Curling Canada bronze medal. This is also a new record finish for the school, as it was the first time that the Guelph women’s program has participated in the post-round robin draws of the national tournament. 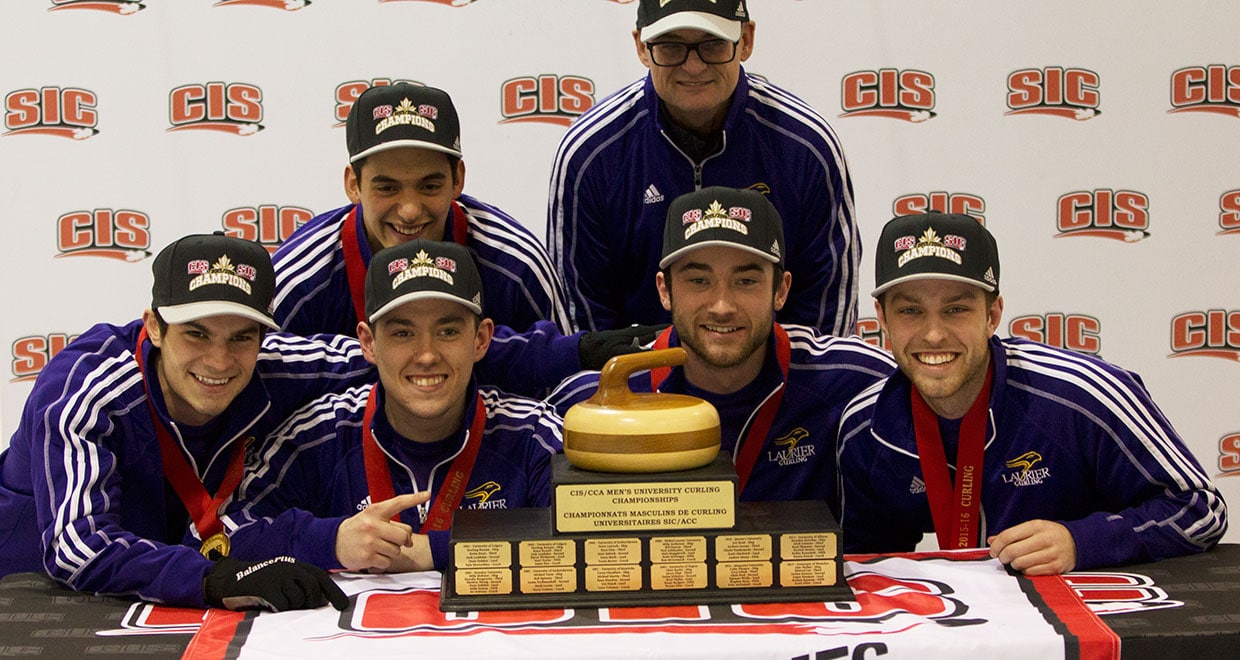 The Wilfrid Laurier Golden Hawks exacted their revenge on the University of Alberta Golden Bears in the most dramatic way possible on Wednesday afternoon by taking the men’s CIS / Curling Canada University Championship title in nine ends, 7-4. “We’ve been ready every time we’ve played them,” said Wilfrid Laurier skip Aaron Squires. “It was just a matter of time that we played to our potential and we really did today – we played amazing. They played pretty well but we were just one step better today.” These teams are no strangers to one another; this year’s gold medal game was a rematch of the 2015 final that the Golden Bears won. The Golden Hawks curled 86% as a team on Wednesday afternoon, and notably Richard Krell (third) and Squires curled at a staggering 93% and 89% respectively. Comparatively the Golden Bears curled at 76% as a team, with Karsten Sturmay (third) and Thomas Scoffin (skip) both curling at 71%. Squires expanded on some of what transpired in the fifth end, a turning point in what was until then an even match. “The fifth was pretty confusing; it took over 20 minutes between both teams. A lot of rocks were in play but we had the angles figured out pretty early. We were looking comfortable in a good spot. Thomas [the Golden Bears’ skip] made a really good shot on his first, which put a lot of pressure on. I was fortunate to make a pretty good shot to take a bit of pressure off, but if he made his last one we might be in big trouble. He was a little heavy so we had a chance for three but we were happy to take two. From then on it was our game to have. It was a matter of ensuring we made our peels and whatnot.” Wednesday’s gold medal win not only earns the Golden Hawks the Curling Canada University Championship title, it also gives them the opportunity to represent Canada at the 2017 World University Games in Almaty, Kazakhstan. “This trip [to Kelowna] was one of the longest trips we’ve ever done, so we’re pretty excited about Kazakhstan in 2017,” continued Squires. “Representing Canada and Wilfrid Laurier is awesome; we can’t ask for anything more.” In the bronze medal match the University of Victoria Vikes bested the Brock Badgers 7-3 after nine ends of play. “This is the first time that UVic has been to the championships,” explained Vikes skip Corey Chester. “It feels great to get here in the first place and then finish on the podium and bring back some hardware for the school.” Similar to the gold medal match, the leads and seconds for both teams were relatively even by the numbers, but they were noticeably different for the thirds and skips. As a team the Vikes curled at a solid 79%, with third Andrew Komlodi shooting 81% and Chester curling at 75%. The Badgers curled at 71% as a team, but third Jonah Mondloch and skip Eric Bradey shot 69% and 58% respectively in Wednesday afternoon’s match. “We had a tough day yesterday with two losses, and obviously this morning in the semifinal,” reflected Chester. “Our coach is an Olympic bronze medalist, so we had a conversation at lunch today after we lost the semifinal and she gave us great motivation and a mindset to go out there and play hard for something. It worked; we had our best game, especially in the last four ends.”