Jocelyn Peterman and Brett Gallant are the 2016 Canadian Mixed Doubles champions after battling to a 12-8 win over Laura Crocker and Geoff Walker at the Nutana Curling Club in Saskatoon, Sask., on Sunday. “It was a bit of a battle. It could have gone either way,” said Peterman, who was competing in her second national championship this season: she won the Scotties Tournament of Hearts playing second on Chelsea Carey’s Team Alberta. “We got a pretty fortunate break. Laura got unfortunate there (in the 7th end) and it worked out probably the worst way possible,” said Gallant, who was a finalist at the Tim Hortons Brier, along with his Team Gushue teammate, Walker. “ 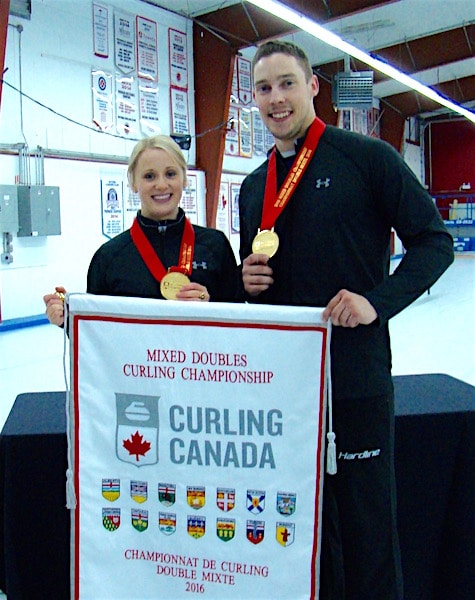 Jocelyn Peterman and Brett Gallant show off their gold medals after the presentation to the 2016 Canadian Mixed Doubles champions at the Nutana Curling Club in Saskatoon, Sask. (Curling Canada/Darlene Danyliw photo)

Crocker, who plays third on Kelsey Rocque’s Alberta team, and Walker came into the final as the only undefeated team in the competition. In the final, they kicked things off quickly with a score of three and had a 7-6 after five ends. The bad break came in the seventh, when Crocker’s final shot ticked a guard, redirecting and removing both of her own rocks. Peterman make no mistake on a hit for four points and took a 10-8 lead into the final end. “She played a great game, and just a really unfortunate break that let us score, and that was kind of the difference,” said Gallant about Crocker’s miss. The new champions were playing in their first Mixed Doubles event together, having practiced briefly beforehand to “work the kinks out.” “There’s a lot of differences in mixed doubles,” said Gallant. “The biggest thing is to just never count yourself out. There are a lot of points scored, and the lead can change quite a few times, but you just have to keep battling, and make your shots. If you get enough rocks in play they might all line up good for you.” That approach paid off in a game that saw momentum swings and lead changes, especially in the final few ends. “(The national championship) was just awesome,” said Gallant. “The level of competition was amazing, between the provincial championship teams, the teams that qualified on points, or the teams that qualified through mixed doubles results during the year, everybody was super solid and tough playing. You look at the Scotties or Brier field and thing they’re tough. This is a really tough field, so we’re really fortunate to be here at the end.” As for defeating his teammate, Walker, in the final, Gallant says he’ll have bragging rights for a while, but “you don’t really want to see your teammate lose.” “We just wanted to play a good game, and I think we did, and in the end we got the breaks,” he said. “It was a battle, and it was fun.” 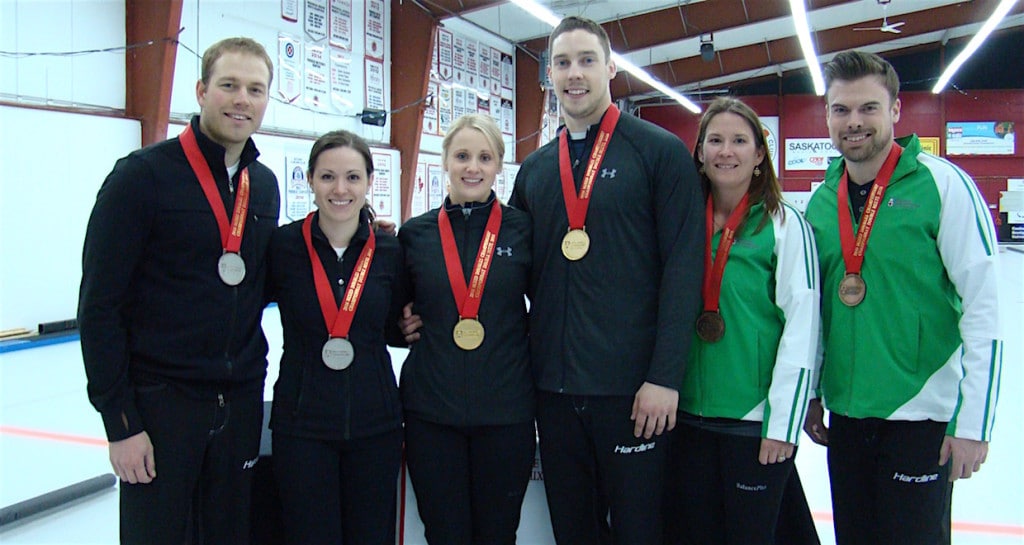