In surroundings in which she’s performed before, Jennifer Jones and her Winnipeg team jumped to a quick start at the 2016 Home Hardware Canada Cup, presented by Meridian Manufacturing.

Jones took the early lead in the standings with a pair of wins on the opening day at Westman Communications Group Place at the Keystone Centre on Wednesday. In the first draw Wednesday morning, the Winnipeg team defeated Edmonton’s Kelsey Rocque 9-4 in eight ends.

Jones – supported by third Kaitlyn Lawes, second Jill Officer, lead Dawn McEwen, and coach Wendy Morgan – then downed Tracy Fleury of Sudbury, Ont., 6-4 in the afternoon thanks to a start of a single in the first and a steal of two in the second.

Jones is no stranger to this building, having made the first of her 12 Scotties Tournament of Hearts appearances here in 2002

“It is incredibly special. It was surreal walking in,” said Jones. “I remember walking to the arena and thinking this is the biggest rink I’ve ever been in and I couldn’t believe we got to play in it. It’s pretty cool to be back in Brandon where it all began in front of a hometown crowd.

“We’re really happy. Obviously to come out with two wins is pretty big. It’s a short round robin against really tough teams. I thought we played well, and I thought we could play better,” she added.

Jones’s start was the opposite of the one she had at the 2015 Home Hardware Cup in Grande Prairie, Alta., where she suffered opening day losses to Ontario teams skipped by Sherry Middaugh and Rachel Homan. But the Jones squad bounced back with four consecutive wins to finish second to Homan in the round-robin. However, they lost the semifinal to another Edmonton skip Val Sweeting.

“To come out and win two is nice, it gives you a little breathing room.” 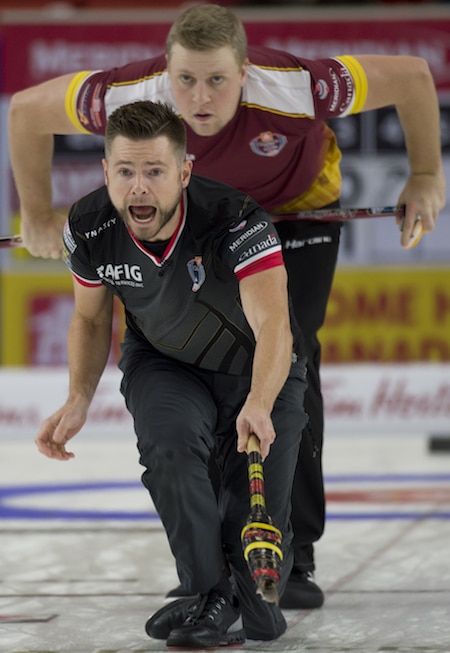 While the winner of this week’s event will be awarded a berth in the 2017 Tim Hortons Roar of the Rings Canadian Curling Rrials in Ottawa, Jones already has a spot. Her team got it due to their Canadian Team Ranking System points after 2016 Scott Tournament of Hearts champion Chelsea Carey of Calgary failed to secure her team’s berth when her team did not finish in the medals at the Ford World Women’s Championship in Swift Current.

In a battle of the defending champion and the Canadian champion, Homan downed Carey 6-4 Wednesday. It was the first game for both teams.

It’s still too early on the men’s side for a front runner to emerge as no team had more than one win in the first two draws.

Brad Jacobs may have thrown the shot of the day in the morning draw but it was a far different story in the afternoon. Jacobs made a spectacular thin double takeout to score two in the 10th end for a 5-4 victory over Winnipeg’s Mike McEwen in the first draw.

Two hours later he was looking at a four on the board against him in the first end and another three in the fifth as he got trounced 8-3 by Brad Gushue’s team from St. John’s. Mark Nichols is calling the shots with Gushue back home in the final stages of rehabbing his hip and groin injury back to health. In his absence, Albertan Charley Thomas has been playing third with Nichols, second Brett Gallant and lead Geoff Walker.

“We got a couple of breaks in the first end,” said Nichols. “We knew they were going to come after us, and after getting the hammer we played a good end. He missed his last one and then I made a good shot for four. So that was kind of it, it wasn’t like we were playing great we just capitalized on a couple of mistakes.”

Defending champion Kevin Koe of Calgary also scored a four early on, in this case the second end, but needed to negotiate a tough takeout with his final rock to down Toronto’s John Epping 8-5. Koe had run out to a 6-2 lead after seven ends, but Epping kept plugging away to score two in the eighth, steal one in the ninth to trail 6-5. Epping boldly put his final rock on the button sidled up beside a Koe rock. But Koe managed to punch out Epping’s shot rock for the victory.

“It surprised John’s team,” said Koe of the fast start, “They always seem to hang around but we built up a good lead which was nice and played a good enough end of the game to pull it out.”

In his first game, Saskatoon’s Steve Laycock pulled out 6-5 victory over McEwen who, like Epping, fell to 0-2