VICTORIA — All told, it was a terrific Saturday night in Victoria for Colton Goller and his Alberta team at the 2017 Canadian Junior Curling Championships, presented by Ambrosia Apples. 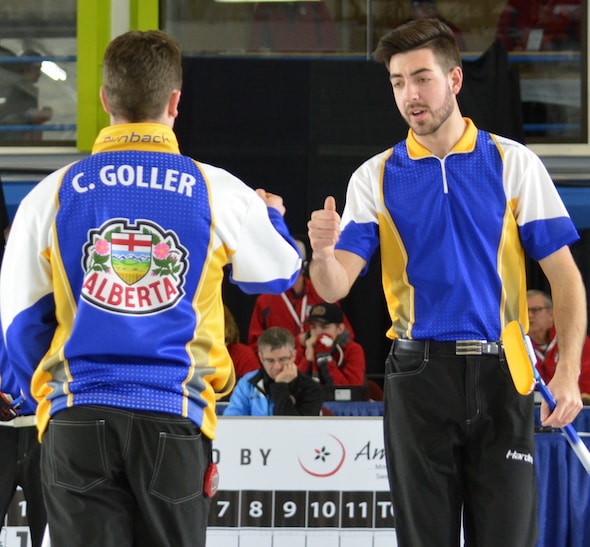 A  two-win day to open the event; a productive late-night practice session at the Archie Browning Sports Centre; and, in general, a lot of smiles in the locker-room after the practice.

Then…disaster — the bus that takes players back to the Inn at Laurel Point, a 15-minute drive from the arena, had departed without them.

“We got out of the change room and the bus was literally just pulling away,” said a laughing Goller, whose team is rounded out by vice-skip Tyler Lautner, second Kurtis Goller, lead Nicholas Rabl and coach Jim Lautner. “I guess it was a good thing we won both of our games (Saturday)  because we were still feeling good. And we didn’t play early (Sunday) so we knew if we got back late it wouldn’t be a big deal. But we sure didn’t want to walk — that’s way too far.”

As it turned out, a couple of kind-hearted Curling Canada staffers were still hanging around the building late Saturday, and were able to get the team and their equipment bags back to the hotel before curfew.

There were no lingering after-effects from the late-night kerfuffle, as the Alberta champs from Calgary improved to 3-0 on Sunday afternoon, dispatching Quebec’s Vincent Roberge (0-3; Lévis) 7-4 in Draw 4 play.

Alberta broke open a 2-2 tie through three ends by scoring single points in five of the next six ends, including steals in the fifth, sixth and ninth ends.

“I’m very pleased with where the team’s at right now,” said Goller, a 21-year-old heavy duty equipment technician. “We’re all in the top half of the shooting percentages, which is fantastic. That’s where you want to be.

“Execution is part of it; when you’re executing well, you’re having fun. Everything’s been going well, we’re doing the small things right.”

Next on the docket for Alberta is a Sunday night showdown with Manitoba’s JT Ryan (2-0; Winnipeg) in a battle of the final two unbeaten teams in Pool A of the men’s competition.

And you can rest assured, the Albertans will be on the bus back to the hotel after the game.

“Hopefully we’ll make it,” said a smiling Goller. “I sure hope so.”

In other men’s action on Sunday afternoon, Prince Edward Island’s Tyler Smith (2-1; Charlottetown) picked up steals of six in the sixth end and four in the third end en route to a 16-2 win over Sawer Kaeser of the Northwest Territories (0-3; Fort Smith); Ontario’s Matthew Hall (Kitchener) improved to 2-0 by doubling Saskatchewan’s Rylan Kleiter (1-2; Saskatoon) 10-5; and Newfoundland/Labrador’s Greg Blyde (1-2; St. John’s) was a 9-5 winner over New Brunswick’s Liam Marin (1-2; Saint John).

Action at the 2017 Canadian Juniors concludes Sunday with a draw at 7 p.m. (All times PST).