It will be nearly three days before Hailey Armstrong’s Ontario team plays for a Canadian junior women’s championship. 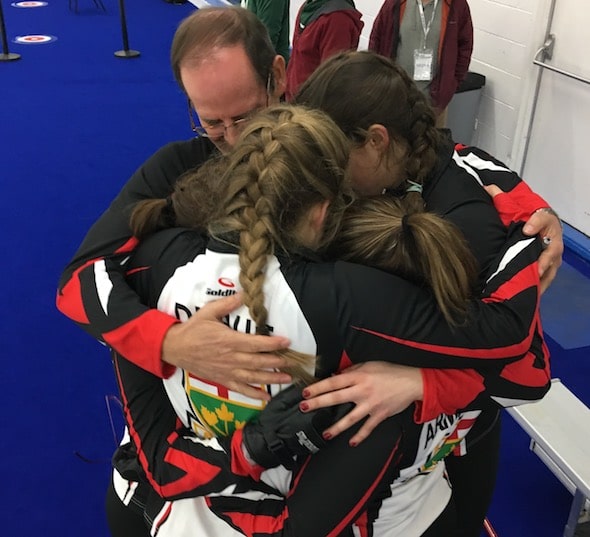 Team Ontario had a group hug after Thursday’s win that clinched a berth in Sunday’s gold-medal game.(Photo, Curling Canada/Al Cameron)

Between now and that 9 a.m. (all times PST) gold-medal game on Sunday at the Archie Browning Sports Centre, Armstrong, vice-skip Grace Holyoke, second Lindsay Dubue, lead Marcia Richardson and coach Bill Rogers will be doing their best to find some distractions to take their mind off what will be at stake.

The first distraction: a long-awaited feed of butter chicken.

“It’s kind of a team tradition,” explained the 20-year-old Armstrong with a smile “They’ve (coach and parents) been dangling this carrot for, like, four days now.”

Suffice it to say, Armstrong and her teammates earned it on Thursday afternoon; a 6-2 win over Saskatchewan’s Kaitlyn Jones (4-5; Regina) clinched first place in the championship pool round robin at the 2017 Canadian Junior Curling Championships, presented by Ambrosia Apples, and nailed down a trip to Sunday’s final.

“It feels really good,” said Armstrong, who took advantage of a key miss from Jones in the sixth end to score three and never looked back. “Everyone played really well, and we’ve been playing really well all week. I just hope we’re going to keep it up.”

Behind Ontario, the race is truly on for the two semifinal berths that remain up for grabs. Alberta’s Kristen Streifel (6-2; Alberta) is in the driver’s seat while there are three three-loss teams behind her: Quebec’s Camille Boisvert (6-3; Lévis), 2013 Canadian junior champ Corryn Brown (5-3; Kamloops) and Northern Ontario’s Krysta Burns (5-3; Sudbury).

B.C. picked up a big win, and eliminated the reigning Canadian and world champs from Nova Scotia in the process. B.C. scored two in the 10th end for a 7-6 win over Nova Scotia’s Kristin Clarke (3-5; Chester).

In the other championship round game, Quebec capped a clutch two-victory day by scoring a deuce in the ninth end and stealing three in the 10th for a 10-5 victory over Prince Edward Island’s Lauren Lenentine (4-5; Cornwall).

Ontario, meanwhile, can complete its round-robin assignments on Friday morning against Alberta pressure-free and then start prep work for the gold-medal game, in which a trip to the World Junior Championships will be on the line.

“We’ll probably come for practice on Saturday,” said Armstrong. “And we’ll do some things when we’re not curling. We’ve been to the wharf to see the seals and things like that. And we might go to the (Royal B.C.) Museum as well.”

And there may be a conversation about re-setting the team goals. During a pre-event text-message conversation back in Ontario, the team came up with a big one that has since been accomplished.

“We wanted to at least make it to the championship round,” said Armstrong. “We’ve made that goal, and now the next goal is to win the final.”

Play concludes at the 2017 Canadian Juniors on Thursday with a draw at 7:15 p.m. (all times Pacific).

The top three teams at the conclusion of the championship rounds will go into the playoffs. The second- and third-place teams will meet in the semifinals on Saturday (women at 1:30 p.m.; men at 5:30 p.m. All times Pacific), with the winners moving into the championship finals against the first-place teams. The women’s gold-medal game is at 9 a.m., followed by the men’s gold-medal game at 1:30 p.m.