VICTORIA — Matt Hall and his team from Kitchener needed to work overtime to do it, but the Ontario champs are off to the playoffs at the 2017 Canadian Junior Curling Championships, presented by Ambrosia Apples. 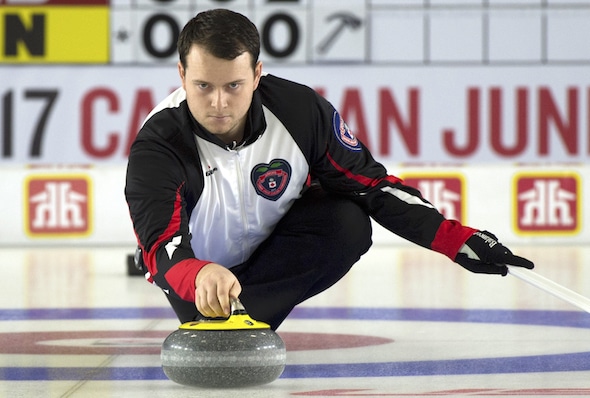 Hall didn’t need to throw his last rock in the extra end, as Manitoba’s JT Ryan was heavy with his final-rock draw Friday afternoon at the Archie Browning Sports Centre in a men’s playoff tiebreaker, giving Ontario an 8-7 victory to qualify for Saturday’s men’s semifinal at 5:30 p.m. (all times PST).

Ontario found itself down 6-4 through seven ends, after Manitoba stole a pair in the seventh when Hall’s last-rock double-takeout attempt went wrong.

But Ontario bounced back quickly, with Hall making an open draw to score a game-tying deuce in the eighth and then stealing one in the ninth when Ryan just missed on his draw to bite the button while looking at three Ontario counters.

Manitoba was forced to a single in the 10th, and when Ryan was heavy on his final delivery, Ontario had cause to celebrate.

“I’d be lying if I said we weren’t down after that steal of two, but we knew we were still in the game; we knew that if we got a deuce right back, we were still in it,” said Hall, 19. “And we have the patience and tenacity to wait out another team. So I was confident that we would still be able to make it a game.”

Ontario was a 7-4 winner over Northern Ontario in their round-robin affair.

“They’re a very good team, and we’re going to have to play our best in order to have a shot tomorrow,” said Hall. “But I feel confident; this game was a great one because it gives us the confidence moving forward that we can battle it out for 10, or even 11 good ends. And hopefully we come out on the right side of the inch tomorrow.”

The women’s semifinal is set for Saturday at 1:30 p.m. between Alberta’s Kristen Streifel (Edmonton) and Northern Ontario’s Krysta Burns (Sudbury).

The winner will take on undefeated Hailey Armstrong of Ontario (Ottawa) in the gold-medal game Sunday at 9 a.m.

TSN/RDS2, the official broadcaster of Curling Canada’s Season of Champions, will provide live and exclusive coverage of the womenʼs and menʼs semifinals on Saturday and finals on Sunday. The same games also will be streamed live in the U.S. on ESPN3.