B.C.’s golden boys have a chance to add to their collection next month. 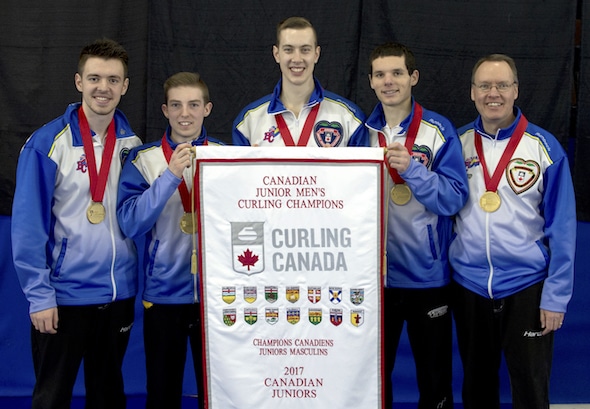 A year removed from helping Canada’s mixed team capture gold at the 2016 Winter Youth Olympics in Norway, Tyler Tardi and Sterling Middleton will take aim at another gold representing Canada when they head to the 2017 VoIP Defender World Junior Championships, Feb. 16-26 in Gangneung, South Korea.

The game turned in the later ends. Ontario — Hall was backed up by third Jeff Wanless, second Joey Hart, lead David Hart and coach Ray Bushfield — recovered from being down 4-1 at the fifth-end break by scoring two in the sixth end and adding a steal of two in the seventh to take the lead.

But Tyler Tardi, an 18-year-old student at Kwantlen Polytechnic University, shut the comeback down emphatically, making a precision double-takeout with his final delivery of the eighth end to score four and take a three-point lead.

“I thought it was there for three, for sure,” said Tardi. “ I wasn’t sure if it would tick our own rock out. I was pretty happy with the result. We definitely needed a momentum swing since they’re really good when they get the momentum. So we really needed to take it back from them.”

Hall would come back with a deuce in the ninth, but Tardi made an open nose hit for the victory to prompt a loud celebration from the B.C. home crowd.

“We gave them everything we had and we have nothing to be ashamed about,” said Hall. “I’m so proud of my guys for the whole week; it was so amazing, and today we just came out on the wrong side of the inch. We had one bad break and couldn’t quite scramble back from it.”

It was B.C.’s fifth men’s gold medal at the Canadian Juniors, and first since Brad Kuhn prevailed in 2000 at Moncton, N.B.

Tardi and Middleton joined Nova Scotians Mary Fay and Karlee Burgess on Team Canada at the Youth Winter Olympics, and Middleton said that experience could help in the preparations for the World Juniors.

“I guess it gives us a slight advantage because we know what to expect, we know how we’ll be feeling (wearing the Maple Leaf), and we kind of know how to prepare,” said Middleton. “So if we can do a lot of the same stuff that we did in Norway, then I think we’ll do pretty good.”

For Paul Tardi, the chance to coach a Canadian champion was special — but doing it with his family made it even better.

“With both of my sons, it can’t be any more exciting than that,” he said. “Tyler’s had a lot of opportunities (with Junior Olympics), but to have my older son part of it to go to Junior Worlds, it’s just amazing.”

Nicholas Rabl, who played lead for Team Alberta this past week, will accompany the team to South Korea as the alternate.

The 2018 Canadian Junior Championships will take place in Shawinigan, Que.