Canada stole a point in an extra end to open the 2017 World Wheelchair Curling Championship with a 5-4 win over Scotland in the first game of the round robin on Saturday in Gangneung, South Korea. 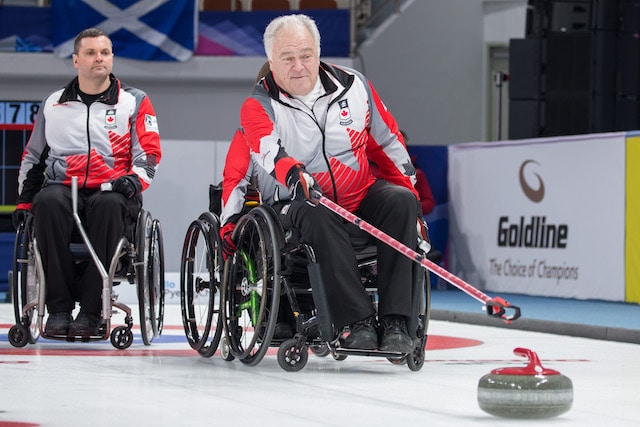 It was a nail-biter for Team Canada – skip Jim Armstrong (Cambridge, Ont.), vice-skip Ina Forrest (Armstrong, B.C.), second Marie Wright (Moose Jaw, Sask.), lead Mark Ideson (London, Ont.), and alternate Ellis Tull (Nanaimo, B.C.) and coach Wayne Kiel (Balgonie, Sask.) – who gave up two straight steals on a couple of missed draws to fall behind 4-2 after six ends. After blanking the seventh, Armstrong had a chance to set up for three points in the eighth, but racked on the guard and only scored two, taking the game to an extra end. After Armstrong made a hit through a port, Scotland’s Aileen Neilson a chance for the win but missed the hit and roll, giving Canada the steal of one and the 5-4 victory. Armstrong is trying to win his fourth World Wheelchair Curling Championship gold medal; he also skipped Canadian teams to victory in 2009 at Vancouver, 2011 at Prague, Czech Republic, and 2013 in Sochi, Russia, where Armstrong, Forrest and Ideson teamed with Dennis Thiessen and Sonja Gaudet to claim gold. The round robin continues on Saturday when Canada will face Switzerland, led by skip Felix Wagner (Saturday 8 p.m. EST). The 2017 Wheelchair Worlds are to be the final event to determine the field that will play at the 2018 Winter Paralympics in PyeongChang. The combined results of the 2015, 2016 and 2017 World Championships decide the 11 teams that will play alongside the host South Korean team in 2018. For more information about the 2017 World Wheelchair Curling Championship, go to: www.worldcurling.org/wwhcc2017