Skip Terry Odishaw and his Moncton team are giving the home-province fans lots to cheer about as they continue undefeated after one day of championship pool play at the 2017 Everest Canadian Senior Curling Championships in Fredericton, N.B. 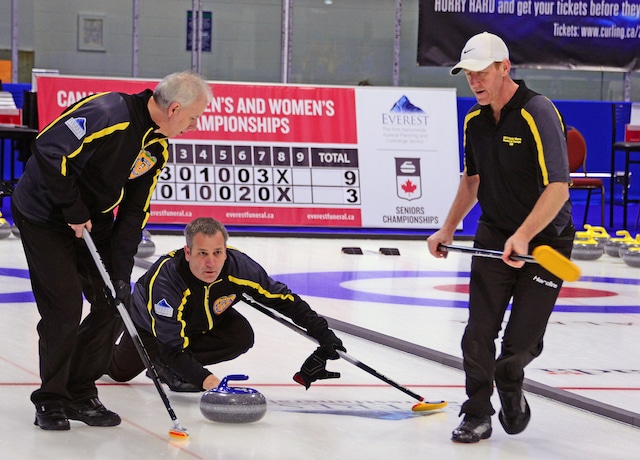 Odishaw, backed by third Mike Kennedy, second Marc LeCocq and lead Grant Odishaw, cruised to a 9-4 win over Philip Gorveatt (PEI) on Thursday afternoon, cementing Team New Brunswick’s position at the top of the men’s standings and taking a step closer to qualifying for the playoffs. Close behind Odishaw is a group led by Robert Maclean of Quebec, who powered over Manitoba’s Murray Warren 7-2 on Thursday evening. Ontario’s Howard Rajala stole his way to an 8-3 win over Alberta’s Wade White. For now, these four teams – New Brunswick, Quebec, Ontario and Alberta –hold potential playoff spots in the men’s standings. In Women’s championship pool play, British Columbia’s Lynne Noble continues to sit at the top of the standings, despite losing 5-3 to Alberta’s Cathy King on Thursday evening – B.C.’s first loss of the competition. With the win, King joins a group of four teams with 3-2 records, right behind Noble (4-1). The group includes Terry Ursel of Manitoba, who lost a lopsided 8-1 contest to Nova Scotia’s Mary Mattatall on Thursday afternoon. Saskatchewan’s Sherry Anderson is also staying close to the leaders. The team from Saskatoon stole five points in two ends on their way to a 9-2 win over local favourite, Kathy Hicks of Fredericton, on Thursday afternoon. Also in the mix is Jo-Ann Rizzo of Ontario battled to a 6-5 win over Northern Ontario’s Peggy Taylor on Thursday evening. 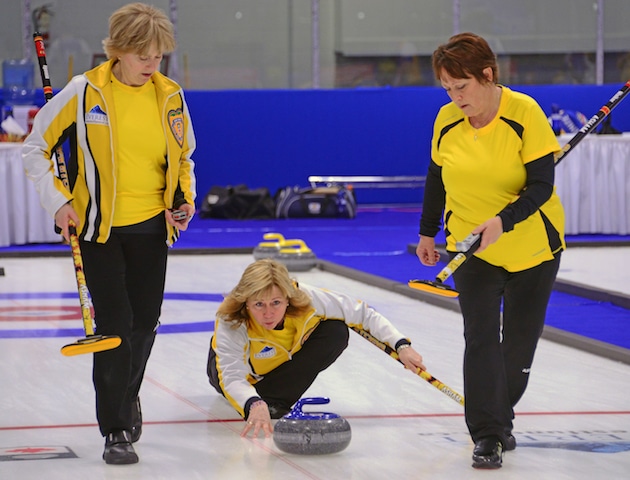 The championship round continues on Friday, with draws at 9 a.m., 1 p.m. and 5 p.m. (all times EDT). The top four teams in the Men’s and Women’s pools will move on to the playoffs on Saturday morning (8:30 a.m.), with medal games taking place at 2 p.m. Draw results for the 2017 Canadian Seniors will be available at www.curling.ca. For event information, visit https://www.curling.ca/2017seniors.