LETHBRIDGE, Alta. — It was a perfect opening for Team Canada at the 2017 World Senior Curling Championships. 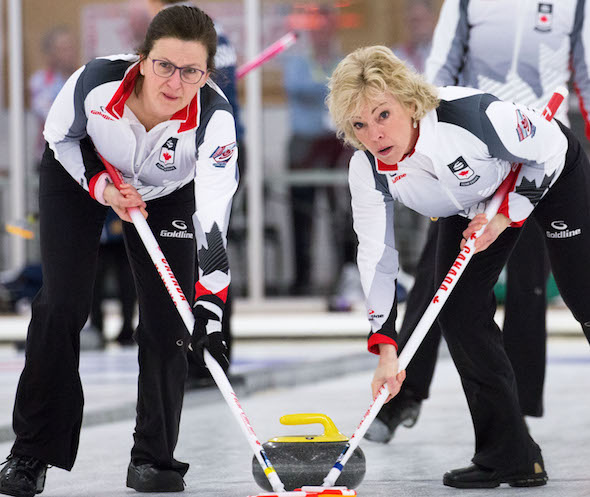 Jones, a six-time champion at the Scotties Tournament of Hearts and a two-time world champ, was pushed hard by Italy’s Fiona Simpson (a Scot now living in Italy) before pulling out a 6-3 victory.

Jones, backed up by third Kim Kelly, second Mary Sue Radford and lead/vice-skip Nancy Delahunt, picked up a gift-wrapped deuce in the fifth end when a Simpson miss nudged a short Canadian guard into the rings, allowing Jones an open draw for the second point, which boosted Canada’s lead to 5-2.

Canada put the victory on the bank on an open hit to score a single in the eighth end from Jones, who suggested her team felt some nerves — likely the result of a long wait to play in Lethbridge. The Canadian teams for the 2017 World Seniors were the winners of the 2016 Everest Canadian Seniors.

“It was 13 months of waiting to play this game,” said Jones with a smile. “I think we never anticipated that we would have the level of nerves and energy that was there.”

The Canadian women finished off a perfect opening day later Sunday with a 7-5 extra-end win over Russia’s Tatiana Smirnova (1-1). Jones didn’t need to throw her last rock in the extra after Smirnova wrecked on a guard with her last delivery.

“You’re on ice you haven’t played on, you’re using rocks you haven’t used before, and you’re at a world championship,” noted Jones. “We were cautious, we made some mistakes, it wasn’t our best performance, but when you get the win, it doesn’t matter at the end of the day. And we learned a lot about the ice. We figured out a few things, so that’s good.” 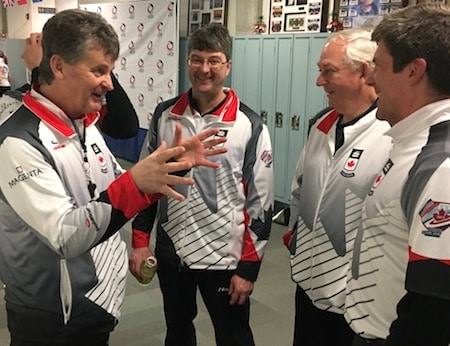 Cochrane, meanwhile, took a big early lead and never looked back against England’s Tommy Campbell. Cochrane, backed up by vice-skip Ian MacAulay, second Doug Johnston, lead Ken Sullivan and alternate Howard Rajala, put a five on the board in the first end and sailed home with a 10-3 triumph.

Like Team Jones, Cochrane and Co. had been eager to get underway after more than a year of anticipation.

“The 13 months has been a long time. We’ve worked hard all year to get ready, played a lot of games — I’ve curled over 100 games this year,” said Cochrane. “The last couple days, we’ve just been so anxious to get on the ice, and it was nice to get out there. The ice was great, and we had draw weight right from the first end, got the five, and it was nice to take that pressure off.”

Unlike Jones, though, Cochrane is making his international debut, and is savouring his first experience of wearing the Maple Leaf on the world stage.

“What’s hit me is that it took me until I was 59 to get here,” he said with a smile. “And what are the chances of getting back again? But it’s just an honour for all of us to get to this stage after this many years of curling. And we want to put on the best show possible. We’re going to work really hard to make every shot.”