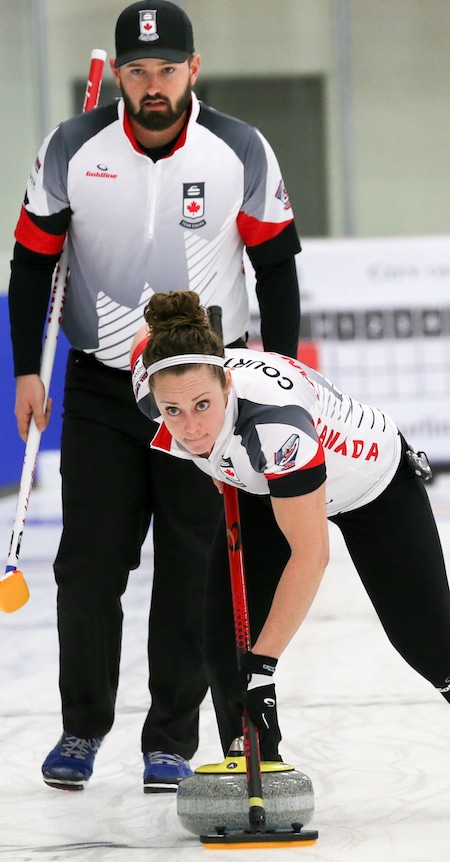 A well-rested Carruthers, from Winnipeg, and his Edmonton-based partner Joanne Courtney took control early Sunday at the ATB Centre against France’s Sandrine Morand and Romain Borini and never surrendered it, cruising to a 9-1 win that took just six ends.

With the victory, Courtney, Carruthers and coach Jeff Stoughton improved to 2-0 and tied for first place in Group D with Becca Hamilton and Matt Hamilton of the U.S. and the Czech Republic pairing of Zuzana Hajkova and Tomas Paul.

Carruthers admitted to some sleep issues Friday night before Canada’s opener on Saturday against Turkey.

“The first game (on Saturday), obviously I was a little bit nervous and very, very excited,” said Carruthers. “Ten on a scale of one to 10, so, yeah, I had a little trouble falling asleep the first night. I was actually able to sleep last night, so that was good.

“We’re in a little bit of a groove now, so we’ll see how long we can ride this out.”

Carruthers, throwing the middle three rocks for Team Canada (teams throw five rocks per end; Courtney is throwing the first and fifth stones) set the table in the first end with a terrific double takeout to erase a French threat on his final throw. That set up an open draw for two by Courtney to open the scoring.

After holding France to a single in the second, it was Courtney’s turn to bring the heat — a precision double takeout of her own to score three.

“You’re going to get more comfortable with the ice as the week goes on,” said Courtney. “We’ve watched a few draws online and also live, so all hands on deck trying to figure out what the ice is doing.”

Canada finished off the victory with a steal of two in the fourth end, and steals of one in the fifth and sixth ends before France shook hands. 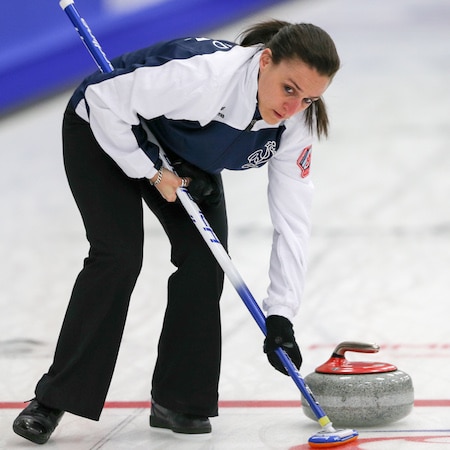 “We’re talking about strategy all the time; when we’re watching games with Jeff and Paul (assistant coach Paul Webster), we’re bouncing questions off each other, to try to get four heads going on the strategy,” she said. “We’re learning as much as we can on the fly here. There are people here with more experience than us, but we’re trying our hardest to catch up on the learning curve.”

Courtney and Carruthers have a pair of games on Monday — at 8 a.m. (all times ET) against Kazakhstan’s Diana Torkina and Viktor Kim (0-3) and at 5:45 p.m against the Czechs.

“We have to prepare for tomorrow morning, 8 a.m., that’s first and foremost, so an early bedtime,” said Carruthers. “We’ll have to be sharp and make sure we’re not sleeping. If we win, it starts looking like we’re putting ourselves in playoff contention.”

The top three teams in each of the five pools will advance to the 16-team single-knockout playoffs, as will the fourth-place team with the best pre-game draw-shot challenge distance.

The combined results of the 2017 and 2016 world mixed doubles championships will determine the seven teams that join host South Korea at the 2018 Winter Olympics in Pyeongchang.