Canadian teams to play for gold at World Seniors

LETHBRIDGE, Alta. — Both of Canada’s teams will play for gold medals on Saturday at the World Senior Curling Championships at the ATB Centre in Lethbridge. 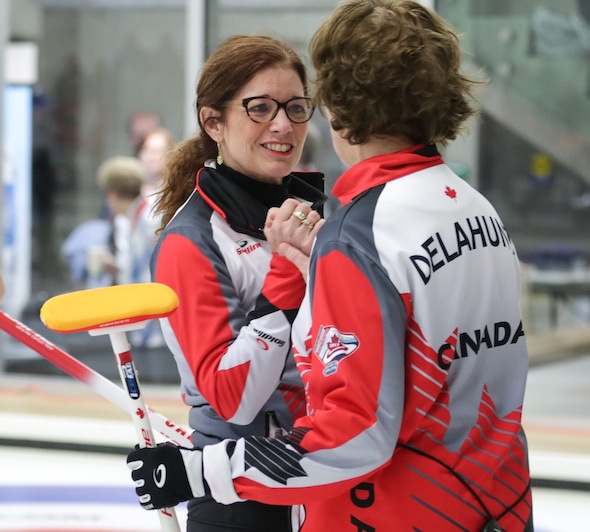 But in Friday, Jones didn’t need to throw her final stone. The Canadians had two rocks buried in the four-foot, and when Lockhart, the defending world senior women’s champ, was heavy with her last-rock draw, the Canadian team was able to celebrate its victory.

“The semifinals are terrifying; it’s such a massive, pressure-filled game,” said Jones. “We’ve played Jackie a lot over the years, and she sort of had our number for a long time. She’s such a shotmaker and she’s not afraid of anything. It was a fun game to be in, and I could have cried tears of joy on winning. Each one of us just felt so passionate about winning it and getting to the final.”

Canada, a perfect 7-0 in round-robin play,  opened the game with singles in the first two ends, and was up 3-1 after five before the Scots came back to tie it with two in the sixth. But Jones was able to engineer a blanked seventh end to have the hammer coming home.

Now, she’ll attempt to win a leading 11th gold medal for Canada in the 16-year history of the World Seniors when she takes on the Swiss, who beat Patti Lank’s U.S. team 8-5 in an extra end in the other semifinal. The U.S. will play Scotland for bronze on Saturday morning.

“There’s always one more, isn’t there?” said Jones. “You’re only as good as your last game, so there’s one more. This was obviously a huge game to win, and we’re thankful for it, and we’ll celebrate it. But then we have to focus on the finish. Winning the worlds is what we came here to do, so we have one more job to do.”

The Canadian men, meanwhile, were in a tight game with the Irish, who were reluctant to mix it up. Canada took two in the first, gave one back in the third, and then took single points in the fourth, fifth and sixth ends to put the game out of reach.

After a perfect 6-0 round-robin run, Cochrane said his team was eager to get started in the playoffs, and it showed on the ice. 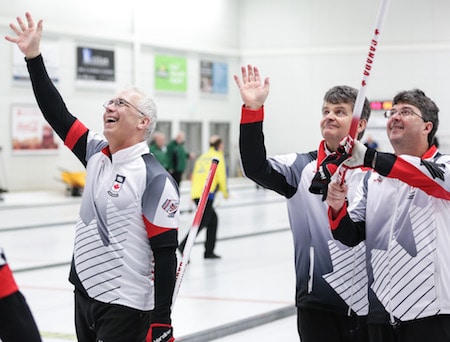 “It’s a pretty big deal, it’s very special,” said Cochrane. “We didn’t want to say we’re coming here to definitely play in the gold-medal game, but that’s been the goal. I think we deserve to be in this game; we’re playing well and looking forward to it.”

Canada will take on defending world senior men’s champ Mats Wranå of Sweden in Saturday’s 2 p.m. gold-medal game after the Swedes knocked off Uwe Saile of Germany 7-3 in the other semifinal. Wranå defeated Canada’s Randy Neufeld in last year’s gold-medal game on home-ice in Karlstad, Sweden.

“Medal or not, it’s about playing the very best that we can,’” said Cochrane. “At this stage in our lives and our careers, we just want to go out there and be proud of ourselves, represent our club, our community and our country as best as we can. It’s not whether it’s gold, silver, bronze or whatever. That’s not going to be the end game as far as determining our success. We’re successful already. We’re Canadian champions, we’re putting on a good show here; you need some good breaks in curling, and hopefully they go our way.”

Meanwhile, the World Mixed Doubles Championship playoffs continue on Friday with Canada’s Joanne Courtney of Edmonton and Winnipeg’s Reid Carruthers playing Latvia’s Santa Blumberga and Andris Bremanis in the 7:30 p.m. quarter-finals. A win for Canada will guarantee a spot in the 2018 Winter Olympics mixed doubles draw.