SUMMERSIDE, P.E.I. — It seems fitting somehow that Nadine Scotland’s Calgary team is staying in one of the most historic residences on Prince Edward Island. 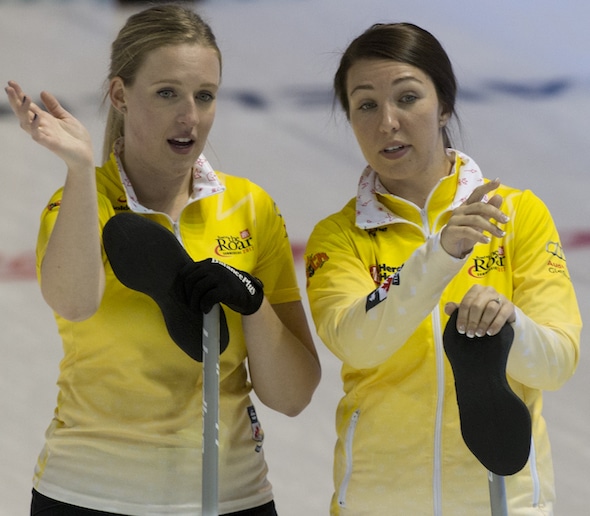 The Montgomery Inn at Ingleside was built 140 years ago by Senator Donald Montgomery, and it was a regular summer destination for Montgomery’s grandaughter Lucy. Yes, THAT Lucy — Lucy Maud Montgomery, author of the Anne of Green Gables series of novels that has made P.E.I. famous around the world.

Since then, Team Scotland has rattled off three straight wins to improve to 3-2 and now is part of a three-way tie for first place in Pool A with Shannon Kleibrink of Okotoks, Alta., and Julie Tippin of Woodstock, Ont.

The latest victory was a tidy 8-2 triumph over Halifax’s Theresa Breen (3-0), a game in which Scotland checked in at a team-high 90 per cent.

The hit for a single produces handshakes as @Team_NScotland finishes off 8-2 win over Team Breen! #curling #RTTR2017 pic.twitter.com/NFpTIw1nlG

Clearly, that 0-2 start was not indicative of what this team can do on the ice.

“We had some close games and some unfortunate finishes, but we knew that if we kept playing like we were playing, hopefully some breaks would come our way,” said Scotland, 27. “That kind of happened in our third game, and we’ve just carrying on from there. We got a handle on the ice and we’ve been building on that.  We’re taking it one game at a time, and see where it gets us — put everything in our own hands, which is what we’re doing at the moment.”

A chance to stay in a house with direct ties to the beloved Anne of Green Gables books was too good for the team to pass up, said Scotland, who with her family toured P.E.I. a few years ago, even going so far as to dress up as Anne.

“We were just looking for an Airbnb to stay in so that we were a little more comfortable than in the hotel, and it just worked out that the history came into play,” said Scotland. “It’s been very interesting to hear the history of the place. The owners are wonderful people, very supportive of us and they’re taking good care of us.”

The top three teams from each pool will advance to the playoffs beginning on Saturday, with the first- and second-place teams crossing over to meet each other in the first round of the A-side. The winners will then meet for the first 2017 Tim Hortons Roar of the Rings berth.

With just one day of round-robin play remaining, there is a world of possibilities, but for Scotland, the solution is pretty simple — win at noon against Winnipeg’s Shannon Birchard (2-3) and she’s in; Kleibrink finishes Friday against Edmonton’s Kelsey Rocque (2-3), while Tippin takes on Tracy Fleury of Sudbury, Ont. (2-3).

In other women’s action, Tippin had a chance to nail down a playoff spot but would give up three in the ninth end to Kleibrink, who ended up winning 7-4.

Team Fleury kept its playoff hopes alive with an 8-3 win over Team Rocque, while in the lone Pool B game, Winnipeg’s Darcy Robertson (2-3) scored two in the 10th end for a 9-8 win over Karla Thompson (1-4) of Kamloops, B.C.

In the lone men’s game, Edmonton’s Charley Thomas improved to 4-0 and nailed down a tiebreaker berth with a 7-5 win over Winnipeg’s Pat Simmons (1-3). Thomas broke open a tight game by scoring three with an eighth-end double takeout, and will clinch first place in Pool B by winning one of his two games on Friday, against Greg Balsdon (2-2, Kingston, Ont.) and Brendan Bottcher (2-2, Edmonton).

Round-robin play in the 2017 Home Hardware Road to the Roar concludes on Friday with draws at 8 a.m., noon, 4 p.m. and 8 p.m. (all times Atlantic). Should a tiebreaker Saturday morning be required, it will start at 7:30 a.m., and be televised by TSN.