SUMMERSIDE, P.EI. — It wasn’t the ideal way for Team Charley Thomas to prepare for the final day of round-robin competition at the 2017 Home Hardware Road to the Roar Pre-Trials, especially with first place in its pool and a playoff berth available. 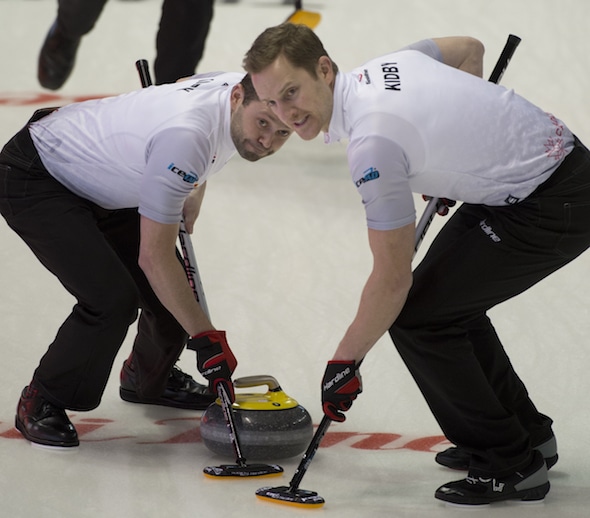 Late Thursday night, a lingering illness forced second Brandon Klassen out of action for the foreseeable future, and Thomas, vice-skip Mick Lizmore and lead D.J. Kidby, coming off their fourth straight win against no losses, were put into scramble mode.

Really, there was only one option: former teammate Nathan Connolly, who was on the team the past couple of seasons to help them gain enough qualifying points to make the Road to the Roar field. The rules required three of the four players who gained the points have to play, meaning that Connolly was the only replacement who could take Klassen’s spot.

“He was our only option, and we knew that he would fit in,” said Thomas. “He’s just such a great shooter and a great guy, and a great teammate.”

The late Thursday phone call started a mad dash by Connolly from his Spruce Grove home to Edmonton International Airport, where he caught the red-eye to Toronto, and arrived in Summerside in time to play Friday night at Credit Union Place.

And despite a sleepless night spent in the middle seat of the back row of the plane, Klassen managed to fire a respectable 83 per cent in helping Team Thomas beat Edmonton’s Brendan Bottcher 8-3 to clinch first place in Pool B.

Thomas, who lost his first game earlier in the day 7-2 to Greg Balsdon of Kingston, Ont., with only three players on the ice, will take on John Morris of Vernon B.C. (3-3) in his playoff opener Saturday at 1:30 p.m. (all times Atlantic), with the winner going into a qualifying game for the 2017 Tim Hortons Roar of the Rings Sunday at 9 a.m.

“We couldn’t have spelled it out better,” said Thomas. “The field is so tough, so to go 5-and-1, I feel like that’s really incredible. Credit to everyone on the team; they really rallied tonight. We were up late last night trying to organize this because we wanted to give ourselves the best shot to get into the playoffs, and then hopefully further.”

Connolly was at home in Spruce Grove working on renovating his basement when the call came from Thomas. While he’s scaled back his competitive curling, he’s still playing regularly with Ted Appelman’s Edmonton team, and actually played an Edmonton Super League game with Thomas, Lizmore and Kidby last week.

But, the call from Thomas literally came out of nowhere; naturally, his first instinct was to contact his wife Cheryl, who was grocery shopping and, by the way, is expecting the couple’s third child in mid-December.

“I said, ‘I just got an interesting call; I might be going to P.E.I. for the weekend. What do we have booked this weekend?’ ” said Connolly with a laugh. “She does all the planning. Surprisingly, there was nothing and she just said go for it. She’s pretty amazing.”

Connolly was operating on mostly adrenalin on Friday night and was looking forward to a good night’s sleep in preparation for the playoffs on Saturday.

“I just didn’t want to let these guys down; there’s a lot riding on it,” said Connolly. “They made it easy on me tonight; Charley made some pistols out there, and the team was solid. I’m just stepping in for one of my best friends, Brandon. I’m thinking of him and hoping he gets better soon. So until that happens, I’ll do whatever they ask of me.”

Like the women’s competition, there will be tiebreakers to sort out the other playoff spots, but the top two in each pool were set.

In Pool A, Glenn Howard (Etobicoke, Ont.) wrapped up top spot and finished off a perfect 6-0 round robin with a 4-3 extra-end win over Morris.

The game-winner! A perfect draw from Glenn Howard gives @TeamGlennHoward a 4-3 extra-end victory over Team Morris and first place in Pool A. #curling #RTTR2017 pic.twitter.com/MyZJhHc9WD

Team Morris finished in a three-way tie for second place with Halifax’s Jamie Murphy and Winnipeg’s Jason Gunnlaugson, but was awarded second based on its head-to-head wins over both Murphy and Gunnlaugson. Those teams will play a third-place tiebreaker Saturday at 7:30 a.m.

Gunnlaugson nailed down the tiebreaker spot with a 5-3 win over Regina’s Adam Casey (2-4).

In Pool B, while Thomas is through to the playoffs, there was a four-way tie for second place at 3-3 behind him, featuring Bottcher, Balsdon, Dayna Deruelle of Brampton, Ont., and William Lyburn of Winnipeg.

Based on head-to-head results within the pool of tied teams, Bottcher was awarded second place, and will take on Howard Saturday at 1:30 p.m. for the right to play in a Trials qualifier on Sunday morning.

The other three times will go the tiebreaker route, with Deruelle and Lyburn playing at 7:30 a.m., and the winner will meet Balsdon later Saturday (time TBA).

It will be a rematch between Lyburn and Deruelle, who met late Friday night, with Deruelle prevailing 7-5.

It’s a chance to break the game open and Dayna Deruelle takes advantage! A hit for 4 and it’s a 7-4 lead for @TeamDeruelle after 8 ends against Team Lyburn #curling #RTTR2017 pic.twitter.com/Eeh9WvdJvb

Balsdon, meanwhile, could have avoided the tiebreaker with a win in his round-robin finale; instead, he surrendered two in the 10th end and fell 7-6 to Pat Simmons (2-4) of Winnipeg.