SUMMERSIDE, P.E.I. — The tension ratcheted up as the early evening went on, and it will keep ratcheting up into the wee hours of Saturday morning at Credit Union Place in Summerside. 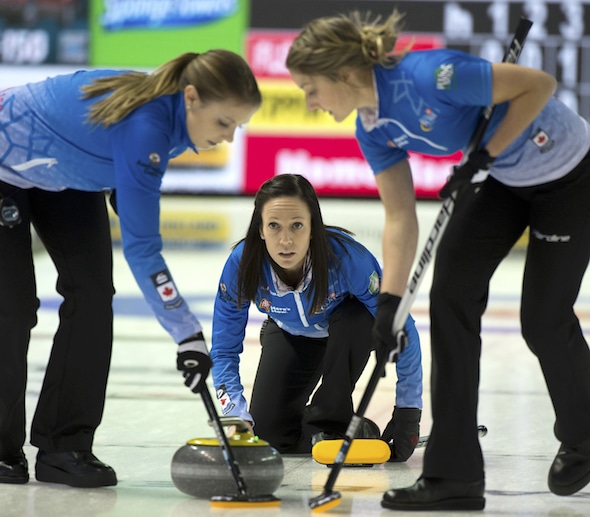 Julie Tippin and her team are headed to the playoffs at the Home Hardware Road to the Roar in Summerside. (Photo, Curling Canada/Michael Burns)

But Julie Tippin can sit back and relax; there are a pile of women’s tiebreakers at the 2017 Home Hardware Road to the Roar Pre-Trials, and Tippin and her Woodstock, Ont., team won’t be in them.

Tippin, backed up by vice-skip Chantal Duhaime, second Rachelle Vink, lead Tess Bobbie and coach Barry Westman, drew for the winning point in the 10th end for a hard-fought 6-5 decision over Tracy Fleury of Sudbury, Ont.

The win locked up first place in Pool A with a 4-2 record for Team Tippin, and knocked Team Fleury out of contention at 2-4.

“We’re so relieved; it’s nice to have that done,” said Tippin, who won’t see action again until the first round of the playoffs Saturday at 1:30 p.m.  We were going to be in quite a mess of a seven-way tie, so we’re so thrilled. Both teams came out and played incredible games, everyone on the ice. It was just a well-played game.”

It’s a draw for the win a first place in the pool, and it’s no problem for Julie Tippin! A 6-5 win for @TippinCurling over Team Fleury! #curling #RTTR2017 pic.twitter.com/TDugqUZxGb

Rocque was awarded second in the pool based on her superior record (3-1) in head-to-head encounters between the tied teams. The other four will battle it out for the third and final playoff spot, with the first games — Scotland vs. Breen and Birchard vs. Kleibrink — at 11:30 p.m. Friday (all times Atlantic). The winners will play Saturday at 1:30 p.m. for the final playoff berth.

Tippin, meanwhile, was looking forward to a peaceful evening away from the stress of tiebreakers, and relishing what her team has accomplished so far here this week in pursuit of a berth into the 2017 Tim Hortons Roar of the Rings.

“We definitely knew we could be at this level, even if we haven’t been in a ton of these big events yet,” said Tippin, who skipped three Ontario junior women’s championship teams and also won gold at the 2006 Canadian Mixed championship throwing third rocks for Ontario’s John Epping. “We keep getting better, we’ve been together for three years and every year we’ve built on that, and I’m just so proud of them that they came out and played so well today.”

In Pool B, meanwhile, just one tiebreaker is required to sort things out, after four teams tied with 4-2 records — Krista McCarville of Thunder Bay, Ont., Briane Meilleur of Winnipeg, Kerri Einarson of East St. Paul, Man., and Sherry Middaugh of Coldwater, Ont.

McCarville and Meilleur both had 2-1 records within the pool of tied teams, and with McCarville having beaten Meilleur in the round robin, they were awarded first and second place respectively.

Einarson and Middaugh, meanwhile, will play a third-place tiebreaker Saturday at 7:30 a.m.

The 2017 Home Hardware Road to the Roar round robin concludes on Friday with a draw at 8 p.m.