SUMMERSIDE, P.E.I. — When Krista McCarville formed a new curling team a few years ago, it was not with the kind of expectations that many of Canada’s elite curling teams come with. 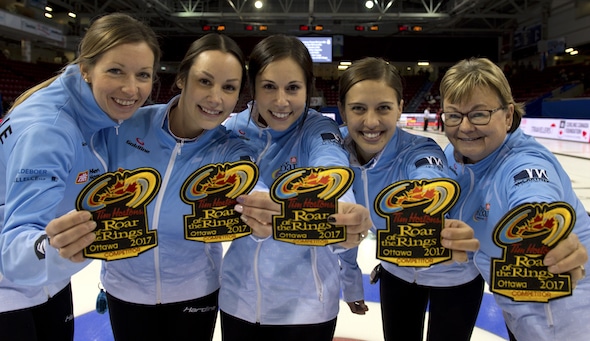 McCarville, then a four-time Ontario women’s champ, had made no secret of the fact that her curling ambitions were being scaled back to the demands of real life — family and career primary among them.

But that new team — McCarville is backed up by third Kendra Lilly, second Ashley Sippala, lead Sarah Potts and coach Lorraine Lang — has rapidly established itself as one of the best in the country, even if it doesn’t play in many of the high-profile events.

It will, however, get a chance to play in one of the highest-profile events in curling next month in Ottawa when Team McCarville competes at the 2017 Tim Hortons Roar of the Rings at the Canadian Tire Centre.

McCarville and her Thunder Bay, Ont., team earned one of the coveted berths into the Canadian Curling Trials Saturday at Credit Union Place, defeating Winnipeg’s Briane Meilleur 7-5 in the first of two women’s qualifying games in the 2017 Home Hardware Road to the Roar Pre-Trials.

“Oh, we’re so excited,” said McCarville, 34, who is a school teacher in Thunder Bay. “To come out here and play so well in this great field, it feels really good to get the first spot and to be going to those Trials.”

It will be the second trip to the Tim Hortons Roar of the Rings for McCarville, who played with a different lineup (with Lang as her lead) in 2009 at Edmonton, and also qualified that year through the Road to the Roar Pre-Trials.

As has always been the case with McCarville, she entered the event under the radar but established herself as a skip to be reckoned with by going 4-3 in the round robin before losing to Shannon Kleibrink in the semifinal.

In recent years, McCarville hasn’t played the Grand Slam circuit to any great extent, but has delivered under the spotlight at the Scotties Tournament of Hearts the past two seasons, winning silver in 2016 at Grande Prairie, Alta., and losing the bronze-medal game last February in St. Catharines, Ont.

“Coming into this, I said to the girls that it’s like a Scotties,” said McCarville. “A beautiful arena with the great atmosphere, the great ice, the rocks, so it’s like a national competition that you want to win.”

There was nothing fancy about the game plan against Meilleur; just efficient shotmaking and scoreboard management.

“We have a strategy that we’re liking; it’s a little bit more of an open game plan, but I feel like that’s what has been working for our team this year,” said McCarville. “It was a tough battle; luckily we were getting twos and kind of holding them to one a couple ends; it just seemed to go our way.”

Meilleur will get another shot at qualifying for the Tim Hortons Roar of the Rings on Sunday as she drops into the B-side qualifying game at 2 p.m. (all times Atlantic), where she will face either Kelsey Rocque of Edmonton or Julie Tippin of Woodstock, Ont.

Rocque and Tippin won elimination games Saturday night; Rocque scored a big three in the eighth end, propelling her to a 6-3 win over Sherry Middaugh of Coldwater, Ont., while Tippin scored a second-end deuce and stole singles in the third and fourth ends and cruised to a 7-3 win over Calgary’s Nadine Scotland.

Howard, who’d suffered his first loss of the Home Hardware Road to the Roar earlier on Saturday, bounced back with a 5-2 win over Winnipeg’s Jason Gunnlaugson.

Balsdon, meanwhile, broke open his game with Edmonton’s Charley Thomas by scoring five in the fourth end and ended up winning 8-5.

Howard and Balsdon will play Sunday at 2 p.m., with the winner going into the final men’s qualifying game Sunday at 7:30 p.m. The winner will play the loser of the first qualifying game, set for Sunday at 9 a.m. between John Morris of Vernon, B.C., and Brendan Bottcher of Edmonton.