Undefeated teams rise to the top at Canadian Mixed 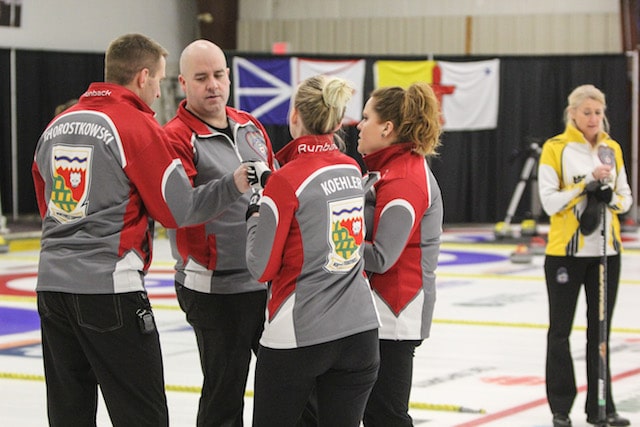 Draw 4 Recap Against Quebec, Nunavut stole their first end of the competition in the first end after a good double by their skip and a flash by Quebec skip Robert Desjardins. Interestingly, Quebec lead Veronique Bouchard is in only her fourth year of curling and here she is competing against the country’s best. A three-ender ended the game in Quebec’s favour, finishing with a score of 8-3 In another change for home province Manitoba, third Natalie Claude Harding is holding the broom due to an injury, but Dean Dunstone is back throwing last rock. Although trailing for most of the game, a Koe wreck on guard let Manitoba back into the game with a steal of three. The game ended in seven when Dunstone missed the hit and stick, and Koe did not need to throw last rock with a final score of 9-5. In other Draw 4 games, Newfoundland and Labrador’s Chris Ford celebrated his birthday with a takeout in an extra end for a 7-4 win over Alberta. And Yukon’s Robert Smallwood defeated PEI’s Dennis Watts 8-6. Draw 5 Recap Saskatchewan’s Bruce Korte set the tone early with two deuces to start the game against Manitoba, causing a hush to fall over the home-province crowd. The game ended with handshakes in six after a 8-3 Saskatchewan win. Ontario similarly went up four after two over Nova Scotia and never looked back. Their result was 7-2 in six ends. Some confusion ensued as teams in this game as well as in the games Saskatchewan/Manitoba and Northern Ontario/New Brunswick returned to the ice for their obligatory seven ends. All three games played with clean houses. There was no change to the winning results, although Nova Scotia took another single in the seventh. The only closely contested game was Quebec and Alberta. Two steals in ends five and six by Quebec put them ahead. The final eighth-end takeout finished the game at 5-3. BC scored five in the fifth end on the way to a 9-2 win over PEI 9-2. New Brunswick defeated Northern Ontario 8-2 to remain undefeated. Draw 6 Recap The Saskatchewan team was on fire against Newfoundland and Labrador after their big fifth-draw win this afternoon, winning 8-3 in seven ends. One of the closest and surprising games was between New Brunswick and Yukon (1-2). There was limited scoring in the early ends, as it took four before NB (3 and 0) found the board. They came back to win 5-4. The battle of the Ontarios was tight. But the south edged ahead in the fourth and fifth, each with a steal of one. The steal of two in six cemented the win for Anderson and company, with a final score of 7-3. The game between Nova Scotia and BC was a seesaw affair, until the Bluenosers took a steal in seven to go up two, winning 6-4. Action continues on Wednesday with three draws, at 11 a.m., 3:30 p.m. and 8 p.m., all times EST. Live-streaming coverage of each event will be made available at cbcsports.ca and via the CBC Sports app for iOS and Android devices, with select coverage available via broadcast on CBC. CBC Sports’ broadcast and streaming schedules are posted here. As well, fans can set up calendar alerts to notify them of CBC Sports’ streaming coverage here and can follow the latest news from the curling world on the dedicated curling page at cbcsports.ca. For event, team and draw information, visit www.curling.ca/2018mixed. Draw scores/standings will be immediately available on Curling Canada’s scoring website. The winning team will then represent Canada at the 2018 World Mixed Curling Championship, at a site and date to be announced by the World Curling Federation. (Report by Mark Inglis)