SWAN RIVER, Man. — Ontario’s Mike Anderson and his team from Thornhill stole its way to victory Saturday in the championship game of the 2018 Canadian Mixed Curling Championship, presented by Westman Communications Group. 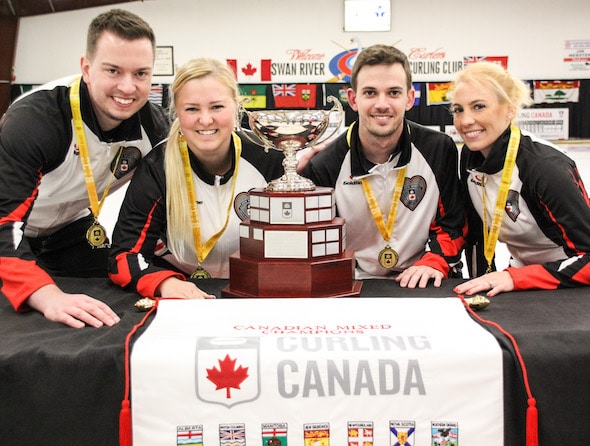 Anderson, playing alongside vice-skip Danielle Inglis, second Sean Harrison and lead Lauren Harrison, stole a go-ahead point in the seventh end and three more in the eighth and final end for a 7-3 win over previously undefeated Robert Desjardins of Quebec.

Desjardins, a former Canadian Mixed Doubles champion, was left only with a nearly impossible triple takeout with his final shot, but was unsuccessful, leaving three Ontario counters for the victory.

“Awesome would be the first word. Proud would be the second, probably.,” said Anderson when asked to describe the feeling of winning a Canadian title. “It’s starting to set in; when we were reading the names of the people who’ve won the trophy in the past, and now to be considered in that class, and nobody can ever take that away from us; it’s pretty special.”

Quebec, which had won 11 consecutive games, couldn’t have asked for a better start, opening the gold-medal game with two points, and took a 3-1 lead after four ends.

But Ontario was able to keep Quebec from its defensive strategy in the final four ends of the game. Ontario blanked the fifth end, and tied the game with a sixth-end deuce. And when Desjardins tried to generate offence in the seventh end instead of going for a blank to take the last-rock advantage into the final end, Ontario made him pay with a series of wonderful shots that left a rock in the four-foot behind protection. Desjardins attempted draw-shot for a single was heavy, and Ontario had its first lead with the stolen point.

And in the eighth, Ontario took advantage of a series of Quebec missed shots to leave Desjardins (his Chicoutimi team was rounded out by vice-skip Amélie Blais, second Thierry Fournier and lead Véronique Bouchard) with the difficult shot at the end. 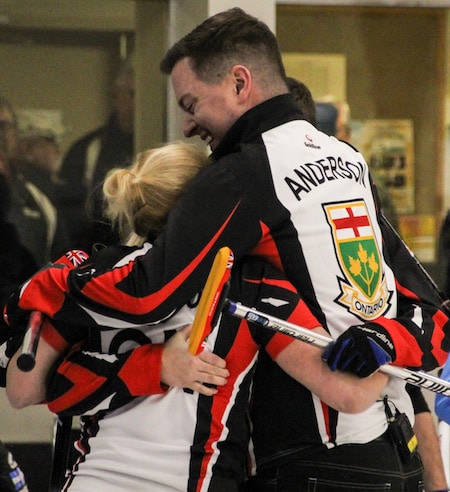 “When we got to vice-skip rocks in the eighth end, we said, ‘We’ve played three perfect ends. Let’s not outsmart ourselves. Just keep doing what we’re doing,’ ” said Anderson, a 32-year-old management consultant. “They (Quebec) kept it so open all week, but we knew we would get a couple opportunities and it was just going to be a matter of taking them when we got them. I was really proud of the team for sticking with it and staying positive.”

Both Anderson and Inglis have worn the Maple Leaf internationally; both were playing for Team Canada at the 2009 Winter Universiade in Harbin, China, where Anderson skipped Canada to a fifth-place finish, while Inglis won silver throwing third rocks for Hollie Nicol’s team. A year earlier, both had won Canadian university championships representing Wilfrid Laurier University.

The Anderson team will get its chance on the world stage at the 2018 World Mixed Championship next fall (location, dates TBA by the World Curling Federation).

“It’s unbelievable. I can’t wait to get (the Team Canada uniform) back,” said Anderson. “I was in awe the first time, and I feel like Danielle and I will be better prepared this time. You know you’re going to be the No. 1 target when you go anywhere and you’re wearing the Maple Leaf. We accept that and can’t wait to get started with it.”

In the bronze-medal game, Newfoundland/Labrador’s Chris Ford and his St. John’s team — third Brooke Godsland, second Zach Young and lead Kate Murphy — stole a crucial deuce in the fifth end, which made the difference in a 6-3 win over New Brunswick’s Charlie Sullivan.

It was Ontario’s fourth Canadian Mixed gold medal; previously, Cory Heggestad won in 2013 at Mount Royal, Que.; John Epping won in 2006 at Whitehorse; and in 1986 at Kamloops, B.C., it was Dave Van Dine coming out on top.