SHAWINIGAN, Que. — You couldn’t blame Tanner Horgan if he considered Tuesday night’s showdown with Ontario’s Matthew Hall at the 2018 New Holland Canadian Junior Curling Championships as a chance for revenge. 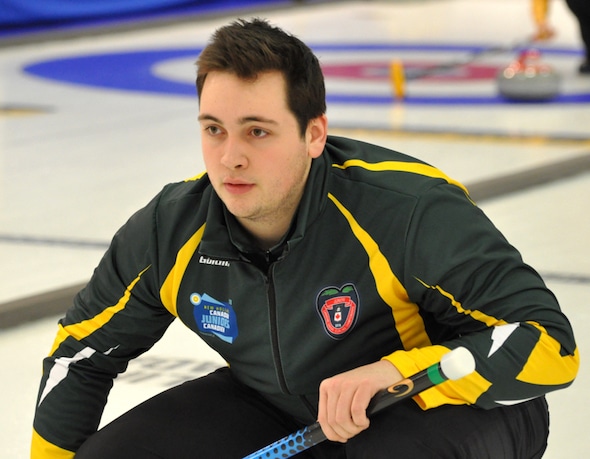 After all, it was Hall’s Ontario team from Kitchener that beat Horgan’s Northern Ontario team twice at last year’s Canadian Juniors in Victoria, including an extra-end victory in the semifinal.

And Hall carried a four-game win streak over Horgan heading into Tuesday night’s battle of unbeaten teams at the Aréna de Grand-Mère.

But moments after an emphatic 8-4 victory that clinched first place in men’s Pool for the 6-0 Northern Ontario champs from Copper Cliff, Horgan, 19, was underplaying the notion that it was some kind of payback game.

“It’s not so much on a personal level or anything; it’s more that they’re a good team, one of the teams you have to beat in order to do well here,” said Horgan, who won bronze at last year’s Canadian Juniors after taking silver the year before at Stratford, Ont. “It wasn’t a ‘get you back’ sort of thing. Although it is kind of nice to play well against a team we’d lost to a few times in a row. It’s nice to get over that hump and come out with a great game.”

Horgan, with younger brother Jake at vice-skip, Nick Bissonnette at second, Maxime Blais at lead and his dad Gerry as coach, took control of Tuesday night’s game with a fourth-end deuce (coming an end after Hall executed a beautiful split to score a game-tying two points) and a steal of three in the fifth.

“We got a little bit of a freebie the next end (after Hall’s nice shot in the third end, the Ontario skip missed an open hit to set up the Northern Ontario deuce), but the next couple ends, we really put together some nice ends, putting rocks where we wanted them,” said Horgan.

With the silver in 2016 and bronze last year, one might think the Northern Ontario team is looking to complete its set of medals with gold this year. But Horgan is refusing to take that bait.

“It’s a long way off, you know?” he said. “I kind of learned last year that if you put all your eggs in one basket, it can really ruin your season, and ruin your attitude towards curling. So I think this year, we’ve really put it on the back-burner. If it happens, it happens. We’ve been close so many times. We’ll see; if we’re lucky enough at the end of the week to be in the final, then, yeah, we’ll be shooting for it really hard.”

Northern Ontario, Ontario, Alberta’s Karsten Sturmay (3-3; Edmonton) and Newfoundland/Labrador’s Daniel Bruce (3-3; Corner Brook) all qualified out of Pool B for the Championship Pool.

In women’s play, Nova Scotia’s Kaitlyn Jones (5-1; Halifax) wrapped up first place in Pool A with a 10-4 win over Alberta’s Kayla Skrlik (4-2; Falher). Both teams advanced to the Championship Pool from Pool A, along with New Brunswick’s Justine Comeau (4-2; Fredericton) and Quebec’s Laurie St-George (4-2; Laval-sur-le-lac).

In games Tuesday night, Glynn made a difficult draw through a port to the four-foot to score two in the 10th end for a 6-5 win over British Columbia’s Taylor Reese-Hansen (2-4; Victoria); Nova Scotia was a 10-4 winner over Alberta; and Northern Ontario rolled to a 12-2 win over Nunavut’s Sadie Pinksen (1-5; Iqaluit).

The teams that don’t reach the Championship Pool will continue playing in a Seeding Pool to determine the final standings.

Action continues in the 2018 Canadian Juniors with draws Wednesday at 2 p.m and 6:30 p.m. (all times Eastern).