SHAWINIGAN, Que. — Karsten Sturmay had no illusions that Wednesday night could prove a challenge for his Alberta team at the 2018 New Holland Canadian Junior Curling Championships. 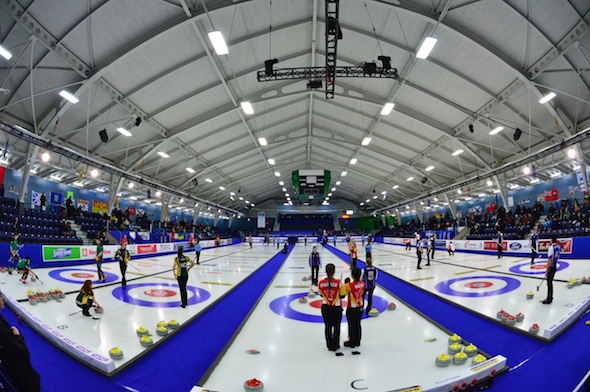 The 21-year-old skip and his Edmonton team — 4-2 after the preliminary round — were realistically in must-win territory at the Aréna de Grand-Mère in order to boost their playoff hopes, and were taking on an equally hungry 4-2 team that just happens to be the home team this week: Quebec’s Alek Bédard and his team from Lacolle.

But Sturmay, in his third Canadian Juniors, showed some veteran poise, coolly drawing to the four-foot with his final stone to nail down a 5-4 victory.

“They’re (Quebec) a very talented team,”  said Sturmay, whose team — which also plays for the University of Alberta Golden Bears — is rounded out by vice-skip Christopher Kennedy, second Glenn Venance, lead Caleb Boorse and coach Rob Krepps. “The second (Émile Asselin), I played him both other times that I was here, and that was the first time I beat him. A ton of respect for them, and we just came out and made a couple more shots here and there, and that was the difference. The boys made a ton of shots tonight; I’m really liking how they’re playing.”

It was hardly surprising that Sturmay managed the scoreboard to perfection to ensure he had hammer coming home; he put together a perfect 4.0 Grade Point Average at the University of Alberta last year in his Bachelor of Science studies, specializing in chemistry — his long-term ambition is to enter the pharmaceutical industry.

That classroom diligence has earned him numerous awards over the years, including the Curling Canada Foundation For The Love of Curling Scholarship and the Sandra Schmirler Foundation Junior Scholarship.

His curling goals, though, are right in front of him this week as he takes a step closer to nailing down one of the three available playoff berths with Wednesday’s win.

“Obviously, the goal for this season was to walk away with that Canada jacket,” admitted Sturmay, who lost a playoff tiebreaker in 2015 at Corner Brook, N.L., and missed the playoffs two years ago in Stratford, Ont. “But if we fall short of that, it doesn’t define a career, right? I see a lot of bright futures on my whole team, and there’s a lot to look forward to, regardless of the end result here. There’s not much point in looking too far ahead; the only you win a string of games is by winning them one at a time.”

In the other men’s Championship Pool game, Nova Scotia’s Matthew Manuel (4-3; Halifax) also drew to the four-foot for a victory, a 7-6 triumph over Newfoundland/Labrador’s Daniel Bruce (3-4; Corner Brook).

In women’s Championship Pool games on Wednesday night, Quebec’s Laurie St-Georges (Laval-sur-le-lac) stole two in the eighth end and one in the ninth for a 7-3 win over Northern Ontario’s Hailey Beaudry (3-4; Thunder Bay); and Ontario’s Emma Wallingford (6-1; Ottawa) got by Alberta’s Kayla Skrlik (4-3; Falher) 7-5.